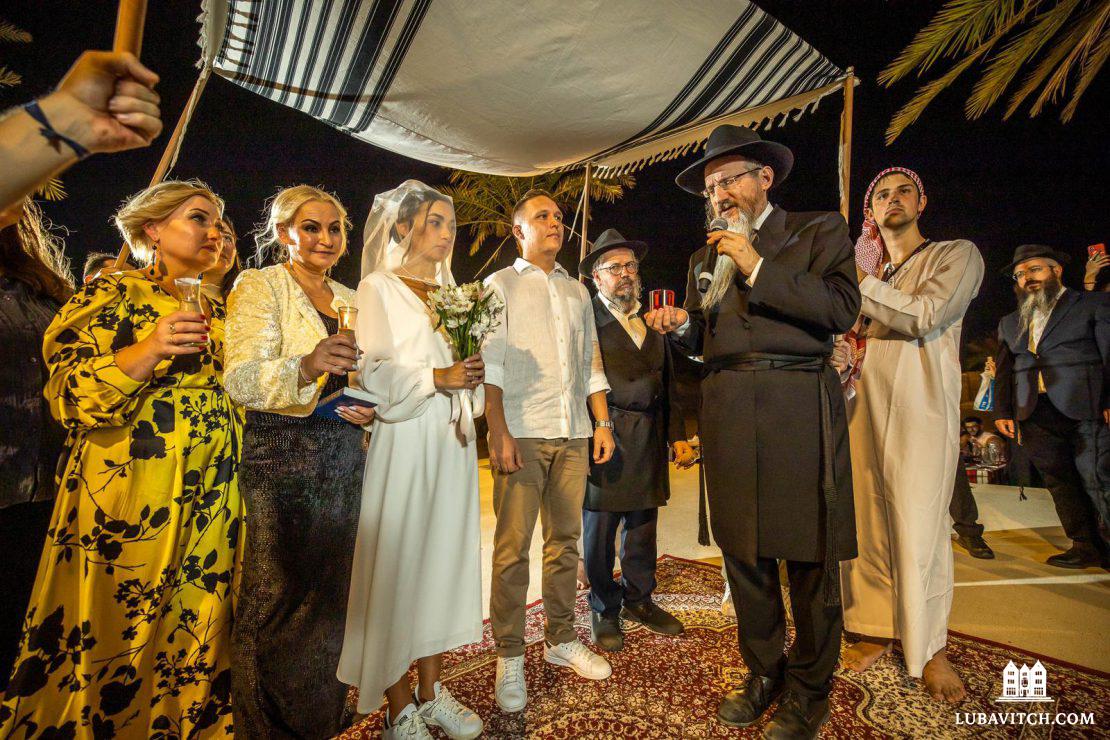 As the sun set on the sands of the Rub’ al Khali desert outside Dubai, six hundred young Russian Jews gathered there, around a chuppah, to celebrate the marriage of Alexander and Alina Rudenko. Despite a day of jeeping on nearby dunes, they mustered the energy to dance and sing well into the night.

The Rudenkos met several years ago, each unaware at the time that the other was Jewish. When Alina met Alexander’s mother, she was surprised to see her wearing a star-of-David necklace. Realizing they were both Jewish, the couple sought a way to deepen their connection to their shared heritage. In February, they began attending Torah classes in Moscow together. Run under the auspices of Yahad, Chabad of Russia’s organization for young adults, the program is just one of many Yahad chapters across the Former Soviet Union.

“For over nine years, Yahad has invited young Russian Jews aged 18 – 28 to participate in nine months of weekly Torah classes,” explains Rabbi Mendy Wilansky, director of Yahad. Upon completion of the course, a one-of-a-kind trip awaits those who pass tests covering their learning. In the past, the students visited destinations such as Spain, Italy, and France. “This year, we chose Dubai because of its novelty as a place Jews have only recently become welcome,” Rabbi Wilansky says.

On October 17, the Rudenkos joined six hundred other qualifying students, from nine eastern European nations, on a weeklong, all expenses paid tour of the glamorous Middle Eastern city. Upon landing Sunday night, they beheld the spectacularly illuminated spire of the Burj Khalifa, jutting deep into the night sky. The world’s largest water fountain, lit up by over 3,000 LED lights, awaited them before they called it an evening. With that introduction, they were off on a roller coaster of once-in-a-lifetime experiences.

Having tasted the richness of their Jewish heritage throughout the year, Alexander and Alina wanted to commit to having a Jewish marriage. They resolved to observe the rules of family purity. Where better to have a large Jewish wedding than in the middle of an Arabian desert?

For Rabbi Berel Lazar, chief rabbi and head Chabad emissary of the Russian Federation, officiating at the Rudenkos’ wedding carried deep symbolism. “This is the first generation of Jews to grow up after the fall of the Iron Curtain,” he said. “They came to Dubai and saw that it’s possible to walk around with a kippah and tzitzit, to be proud Jews, even in an Arab country. It has an enormous impact on them.”

United Arab Emirates government officials did more than tolerate the Jewish tourists. “When they heard we were coming, they rolled out the red carpet,” recalls Rabbi Wilansky. On the day following the wedding, Rabbi Lazar shared a stage at an elegant banquet with UAE Minister of Tolerance His Excellency Nahyan bin Mubarak Al Nahyan and Seikh Mohamed Ali Alabbar, the property developer behind the Burj Khalifa and the Dubai Mall. “Shalom, which means peace, is one of the names of G-d,” Rabbi Lazar reflected at the event. “When we are together in peace, G-d is with us.” He then presented the Emirati officials with a menorah to symbolize Russian Jewry’s appreciation for their openness.

With trip participants sharing their adventures in jaw-dropping social media posts, interest in Yahad’s programming reached a fever pitch. Yahad.ru’s instagram account attracted thousands of new followers over the week. Despite having closed registration for the coming year, which is planned to culminate in a trip to Morocco, it was decided to reopen registration in light of the unprecedented interest in the program.

Combatting assimilation is a crucial focus of Yahad’s programming. “The idea is to make these trips so tantalizing that it’ll inspire people to take a look at their ancestry and see if they are Jewish or not,” Wilansky says. “There are so many Jews in the Former Soviet Union who just aren’t aware of their identity.” Putting the Rudenkos’ Jewish wedding center stage on the itinerary hammered home another takeaway from the trip —  a strong attachment to Jewish practice.

“Every year after the program, I hear amazing things,” says Rabbi Wilansky. “This year seven boys resolved to get a circumcision, guys have requested tefillin, girls have pledged to light Shabbat candles, and last year we celebrated sixty-four weddings. Seeing people their age who are growing alongside them has a powerful effect. It turns students into ambassadors of Judaism.”