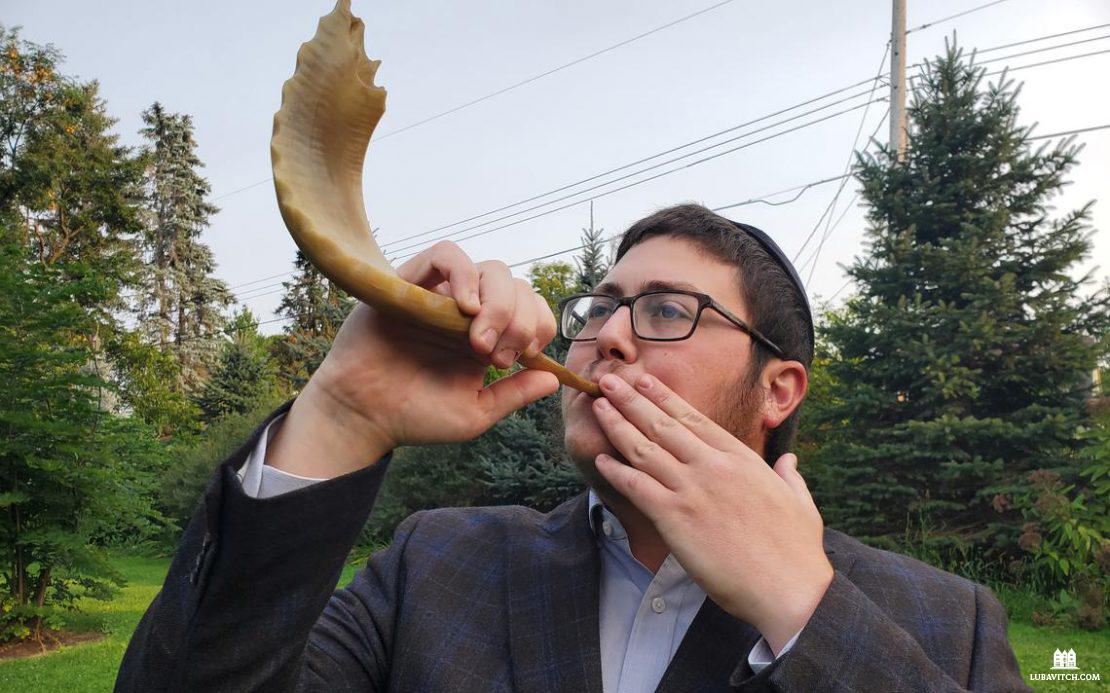 In Ontario, Canada, Rabbi Shmuli Nachlas, executive-director of the Jewish Youth Network, checked in with tens of the network’s alumni about their holiday plans. The response he got was almost universal, almost everyone felt unsafe attending any kind of service. That got him thinking, “If we can’t encourage people to go to synagogue this year, let’s figure out a way to take the mitzvah of sounding the shofar to a new level.” With creativity and a little innovation he created a solution–ShofarOnTheCorner.com. Based on the Uber concept, Shofar On The Corner matches those who want to hear shofar with volunteers who will sound the shofar on a street corner, front yard, or at a landmark near the requester’s location.

What started as a local project has ballooned into a global portal through which, so far, more than 2,500 people have signed up to hear the shofar sounding at 555 spots in seven countries on Sunday.

Like many other college campuses, students at University of Wisconsin, Madison, have gone into full lockdown, with many in quarantine after initial outbreaks. Last year Chabad Rohr Jewish Center at UW hosted 470 students for Rosh Hashana dinner. This year they ordered 200 pounds of brisket, double last year’s order, but instead of convening at the Chabad center their 700 guests will gather in 93 pods for Rosh Hashana. Students signed up to either host, or join a pod. Chabad will provide dinner along with Shabbat candles, apples and honey, Jewish themed dinner table games and some Rosh Hashana discussion prompts. But twenty minutes before candlelighting, students will log on to participate in a Rosh Hashana conversation with Rabbi Mendel and Henya Matusof, Chabad’s directors, uniting all the disparate groups across the campus as the Jewish New Year begins.  “Although we’ll be spread out in dorm rooms, apartments, greek houses, or wherever students are hosting their pods, it’s important we know that we’re one Jewish community, all doing Rosh Hashana together,” Rabbi Mendel said.

Many communities are hosting indoor and outdoor socially distanced services, with some leading multiple shortened rites so they can rotate many smaller groups, in place of their one large congregation. Rabbi Chanoch Kaplan, of Chabad of Northwest Bergen County (NWBC), New Jersey, believes it is vital to host in-person services. “Before we create a new reality in which people become irreversibly entrenched, we need to bring people back to the synagogue and normalize communal life again, obviously with the utmost caution for people’s safety,” he said. Chabad of NWBC will host a limited indoor service, outdoor services in small groups with separate times for adults and those with kids so as to limit exposure between children and those who are more vulnerable, and Shofar in the park for those who prefer to meet at a neutral place.

In Ft. Lauderdale, Florida, where thousands of elderly Jews are extra careful to stay clear of crowds, Chabad’s Rabbi Moshe Meyer Lipszyc has arranged a rotation of Chabad emissaries to blow shofar out in the pool area of roughly 30 high-rise apartment buildings. “We’re going to bring the mitzvah of the holiday to people wherever they are. No one should have to miss the shofar blowing because of the present circumstances,” he told Lubavitch.com.

With traditional tunes at the heart and sentiment of most people’s High Holiday experience, communities are also hosting pre-holiday concerts to set the tone as the holiday begins. Chabad communities of the Caribbean gathered virtually for a concert with Israeli star of Broadway’s Les Miserables, Dudu Fisher on Monday, Chasidic singer Eli Marcus will lead a virtual concert on Thursday evening. In an open air tent, with clear partitions dividing congregants into socially-distanced pods, cantors and a four-part acapella choir will lead the services at Chabad of Port Washington, New York. At Chabad of Chula Vista, California, an outdoor concert Sunday evening at the end of the Rosh Hashana holiday will follow the shofar blowing on Sunday afternoon. Across the Pacific, Chabad of Malvern, in Melbourne, Australia filmed a music video with the high points of the day’s prayers. No gatherings are allowed whatsoever in the city, so on Thursday evening the community came together on Zoom to sing the familiar tunes and share insights and encouragement ahead of Rosh Hashana.

Nonetheless, and true-to-character, Chabad emissaries are quick to point out the silver lining in the lockdowns that have made their work that much more challenging. Rabbi Matusof says that on a typical year, although the logistics would be far simpler, with students coming to Chabad instead of Chabad sending dinners out to nearly 100 “pods,” he would still be competing for their attention: “Between college football and all things that happen in the fraternities and sororities on a weekend of a typical year I’d be competing with so many other things. Now, because of COVID-19, the airwaves are empty. That means that many more students will be hearing shofar this year.”

With the first day of Rosh Hashana falling out on Shabbat this year, Chabad emissaries are capitalizing on another teaching opportunity. People, even the teens, Rabbi Nachlas says, are noticing that there’s no shofar blowing on day one of Rosh Hashana. “With ShofarOnTheCorner.com, we got lots of people asking us, ‘why is shofar only on the second day?’ The situation we are in cuts around all the noise, straight to the essence–the mitzvah of the day–and helps us zone in on it and get to the essence of who we are, and what we need to connect to. It’s a great learning experience.”