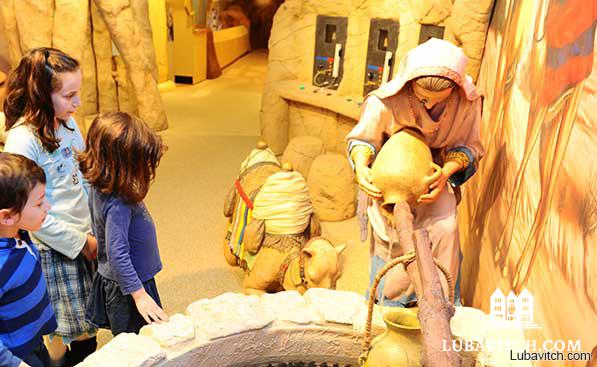 An exhibit at the Jewish Children’s Museum.

Frances Mangan, a teacher at PS 207 in Howard Beach, recently brought 27 first graders, most of them of Hispanic and Italian descent, to the Jewish Children’s Museum in Brooklyn.

Greeting them as they stepped out of the elevator was a lifelike model of Abraham, the biblical patriarch, the man who defied idolatry and became the first Jew. Reclining in front of his tent, just as described in the Torah, he smilingly offers hospitality: “Come inside. You must be exhausted from the heat.”

“A Voyage Through Jewish History,” the new, fourth floor exhibit in the Jewish Children’s Museum at 792 Eastern Parkway in Brooklyn, takes visitors on a journey through Jewish time, beginning in Abraham’s and Sarah’s day, through contemporary times.

Since opening in 2012, some 50,000 people a year have been greeted by Abraham as he offers a gateway into the 7,000 square-foot tour of Jewish culture and lore. Mangan only wishes she had more time at the museum with her class.

“It was by far the best trip I have taken any class on, anywhere. The displays and activity were perfectly pitched to children.”

Championed by Devorah Halberstam, whose son Ari was murdered in the 1994 Brooklyn Bridge shooting, the Museum is meant to promote tolerance and provide a basic understanding of the Jewish people. As such, it is designated as a cultural institution but its sensibility is clearly suffused with Jewish values.

As 15 pint-sized visitors make their way into Abraham’s tent, they encounter Sarah, his wife. She is busy making bread that looks a lot like a pita. The children are encouraged to touch the bread. It is clammy, a bit tacky in texture, as unbaked dough might be. Poke it again a little harder, and the dough begins to rise.

For these second and third graders from the Chabad Hebrew School of Greenwich visiting on a recent Sunday, the exhibit allowed them to display what they had learned in Hebrew school and add to that knowledge as they played their way through the first two displays on the floor.

“I liked how we came here for Hebrew school,” says Stella Maymin, 8, a third grader, who played a matching game involving authentic looking clay pots, learning about the 12 tribes of Israel. “If someone doesn’t know something about the religion, it would be good to come here and learn something.”

And while Stella didn’t know it, that is a large part of the museum’s mission.

She and her classmates elbowed one another for a chance to play a pachinko-style arcade game that fills the stripes on Joseph’s coat with beads of many colors. And as Joseph’s journey carries him to Egypt, it scrolls, comic-book style, along the Nile, as the children journey with him.

Approximately 3,000 public school children make this journey with their class annually. And since the museum serves non-Jewish children as well as a mix non-religious and observant Jews, organizers wanted to find ways to reach them all.

“The overall mission of the museum is to impart an appreciation of Jewish culture,” says Halberstam. “It brings it together in one place, for all children to gain a perspective of what Judaism is about.”

With $5 million in funding from the City of New York, and thousands of years of Jewish history to cover, organizers had to hone in on moments they felt would be meaningful to the children visiting. The results, according to Halberstam, far exceeded her expectations.

“It’s rewarding to see it finished and to see the children get involved,” says Halberstam. In a rush of excitement she describes her favorite exhibit, David’s Harp. High-tech “strings” are actually beams of colored light. Pluck on them, and each one sounds. Run your fingers across them and you can create music. “It’s not just a walk through. You can spend quality time on each of the exhibits.”

And if the tumult of kids scrambling to be first as they sample the displays and activities is any indication, they love it as much as its founder does. Joseph’s story takes them into Egypt, although the multi-media Sinai experience has not yet been completed. Fundraising continues for the project, which will include an amphitheater as well as other multi-media attractions.

Designed by Work With Your Brain, a Croton-on-Hudson company that designs built environments, it is the only Jewish children’s museum in this country. When organizers began working on it, they were inventing from the ground up, says Nissen Brenenson, the museum’s director of education. “I’ve worked with design companies, which very often, even if they are doing something new, are following precedent, or another version of something that’s been done before.

“Here, because of space constraints, and more importantly, the subject matter, many, if not all the exhibits and the basic design, were new.”

Exhibits on other floors are dedicated to Jewish practice and ritual life. A model supermarket, complete with scanners, engages children in games about Kosher. Children can learn about Shabbat and how it is observed; see the days of creation and dress up for Purim.

The fourth floor exhibit demonstrates even more creative approaches to the material. The walls of Jericho come tumbling down – it’s a scrolling light box that descends into the floor after the shofars at its base have been blasted enough times. Each shofar is attached to a bicycle-horn bulb, and squeezing each one sounds the various-sized ram horns.

Along the way, children can build the Holy Ark that held the tablets upon which the Ten Commandments were inscribed. A “First Fruits Race” is an arcade game that allows seven children to participate in a water-gun shooting gallery. Each child shoots water at one of the seven species mentioned in the Torah. The winner is the one whose fruit makes it to the top – the Temple in Jerusalem – first.

“It’s so amazingly hands-on,” says Alice Talmud, principal of the religious school at Temple Beth Israel in Port Washington, a Conservative congregation in Long Island. “It’s just fun to explore. They come back happy, feeling involved and connected and talking about their experience,” she says of the third graders.

Talmud has been bringing students to the museum since 2008. “They love to feel smart when they know the answer and they still retain a sense of wonder” that the museum nurtures.

As the exhibit moves along, a hall of “Sages through the Ages” pays tribute to the scholars who codified Jewish law. An open representation of the Talmud shows the unique page layout, with text in the center and various commentaries around it. Hinges allow participants to open the various blocks of text to discover their meaning and relations to the original passage.

An “Alley of Courage” shows the courageous acts that it took to keep Torah learning alive through the Shoah. The stories are from real survivors and told in ways that are child-appropriate, focusing on the acts of courage and bravery rather than the more horrific aspects of that period.

As the exhibit winds down, children leave notes in a model of the Kotel, just as they could at the real Western Wall in Jerusalem. The replica has the look and feel of the real thing, offering a facsimile of one of Judaism’s most important sites.

The final exhibit yearns for a Messianic era. The exhibit invites visitors to make it happen by doing more mitzvahs. As children run from station to station, lighting electronic Shabbat candles, touching the mezuzah, giving tzedakah, or coins to charity, light sparkles from each station and up a wide, clear tube in the center of the room, with Disney-like artistry. As the tube fills with light, the room lights brighten, and wall murals showing Jews returning to Jerusalem from all over the globe light up in an interactive grand finale.

“I think there should be one [museum] for every religion we have,” says Mangan. “One for Christian, one for Buddhists, one for Muslims. Then maybe we would all get along a little better.”

Related Articles
View All
Jewish Children’s Museum Expects Steady Summer Tours
The fourth graders from Yeshivat Noam of Bergenfield, NJ, could not resist calling out answers to their struggling compatriots who were trying to score points…
In Support of Jewish Children: Clinton, Pataki, Guiliani . . .
More than 600 guests turned out in support and celebration of the realization of a dream at last night’s Jewish Children International Tzivos Hashem dinner.…
The Jewish Children’s Museum Nears Completion
For several years now, the constant activity of crawler dozers, backhoes and tractor loaders made an already busy thoroughfare in Crown Heights more restrictive to…
Chabad’s 18-Wheel Museum Roaring to Life
Like Harley Davidson, Wii, and Clinique who often ply their wares in customized 18-wheelers that transform into mini-circus-like event centers, Chabad is planning one of…
Who Was Ari Halberstam? 20 Years Since Terror Strikes On the Brooklyn Bridge
Ari Halberstam was the child who sat in his lap and played at his feet—the closest semblance of a grandson that the Rebbe would ever…
Editorial
It’s Never Too Late
Across every segment of Jewish life, in America and elsewhere, we are seeing a demand for genuine, substantive, Torah study opportunities
Editorial
Sons And Daughters At The Seder Table
It was unseasonably cold on the first night of Passover back in 1979. Snow had fallen the day before and melted into slush puddles that…
Editorial
Better Than Birthday Cake
Chabad communities around the world are launching a truly ambitious 1,210 new institutions.
Editorial
In Pursuit of Practicable Freedom
Parents, however, who choose to educate their children in private schools are taxed all the same, while additionally having to pay full tuition for their…
Get Inspiration to your inbox!
Newsletter
Join our weekly newsletter for inspiration and updates
Donate
Find Your Local Chabad Center
Subscribe
|
Log In
Chabad
About Chabad-Lubavitch
About Chabad Lubavitch
The Rebbe
Headquarters
Magazine
Magazine
News
News & Updates
In The Media
Impact
Social and Humanitarian
Social and Humanitarian
Education
Education
Community
Community