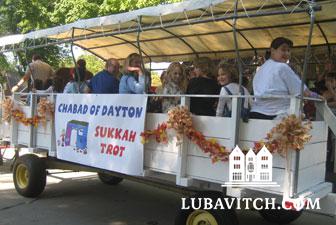 Migrating geese and horse drawn carriages were but some of the vehicles Chabad centers around the world used to drive more Jewish families to celebrate Sukkot this year.

With the booths used on the holiday on their way back into garages and sheds, Chabad representatives from Dayton, OH, to Toronto and Winnipeg are among the thousands of centers now evaluating the impact of their innovations.

As the holiday that comes after Rosh Hashannah and Yom Kippur – holidays observed by so many that their arrival causes a dip in trading action at the New York Stock Exchange, Sukkot comes after days spent “doing Jewish,” taking extra effort to drum up enthusiasm for yet another holiday.

Horse drawn wagons helped Chabad of Greater Dayton overcome holiday ennui. Three teams of horses pranced through the streets of Dayton suburb Oakwood drawing 100 participants through the quiet streets, causing lawn-mowing homeowners to pause in their pursuit of verdant perfection and wave. The wagons made the rounds to three sukkahs, where the kids and adults learned about an aspect of the holiday by puzzling out clues retrieved from popped balloons.

Watching her grandson Elijah, 7, pet the horses and race into the sukkah delighted Helen Markman of Kettering, OH. “The kids are used to seeing a sukkah, but this was a whole different dimension of excitement,” she said. “These are the types of events that will stick with them.”

Youth and program directors Rabbi Levi and Rochel Simon who booked the hayride buggies and organized the sukkah hop estimated that 50% of those who participated were new faces. “It helps when Chabad becomes known for doing innovative programs,” said Mrs. Simon. “People are more likely to come when they know there are in for something interesting.”

Capitalizing on an established point of interest launched participation numbers sky high at Lubavitch Centre of Winnipeg’s Sukkot celebration. Winnipeggers turn out each year to watch hundreds of thousands of geese flocking to Oak Hammock Marsh to fatten up before their migration. On a clear moonlit night during Sukkot, the masses of birds flying in their characteristic V-formation swooped down near a Chabad sukkah.

“You could see hordes of them coming, landing close in. It was really something spectacular,” said one of the event’s organizers, Rabbi Boruch Heidingsfeld.

Before sunset, families had a chance to shake the lulav, recite the Tashlich prayer on the floating boardwalk. “It brought people out who were curious about the birds, curious about Sukkot, or curious about both.”

Watching the birds follow their instinct to migrate across the miles without a map is quite a contrast to the way the Children of Israel journeyed through the desert to land of Israel. Over the thunderous honking of the geese, Lubavitch Centre director Rabbi Avrohom Altein told the group at the marsh that during the Jews’ biblical migration, commemorated on Sukkot, “Hashem guided and protected them every step of the way home to Israel. So it will be in the times of Moshiach.”

Tacked onto the final days of Sukkot is the holiday of Simchat Torah. A night (and day) of dancing with the Torah in celebration of the completion of a full reading cycle, Simchat Torah is fun – for those willing to stay up late.

Knowing that parents would skip the celebration if it interfered with sacrosanct bedtime routines, Chabad on the Avenue in Toronto massaged the timing of its Simchat Torah program to keep kids and their parents happy. For 90-minutes before night fell and the holiday began, Rabbi Menachem and Chana Gansburg kept children engaged in races and imaginative games to introduce them to holiday’s significance.

After that prep session, when holiday began, the children lofted their candy-filled flags into the air and danced with the Torah. “By starting early, we had 75 children instead of 10,” said Rabbi Gansburg.

Understanding where a community’s interests and needs lie, and having them intersect with Judaism without diluting Jewish content, observance or meaning is a tall order reached by Chabad’s ever-resourceful cadre of representatives.