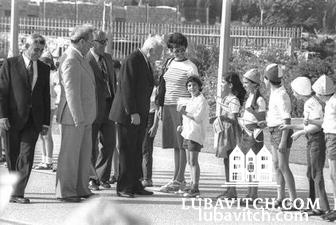 (lubavitch.com) Efraim Katzir, Israel’s fourth president who served from 1973 to 1978, internationally recognized biophysicist, and Zionist activist, died Saturday evening in his home at the Weizman Institute in Rehovot. He was 93.

His passing is noted within Chabad, where he is remembered as an outspoken supporter for the movement, referring to Chabad as “the true Zionists.”

Katzir was swept up in Israel’s fight for independence. He used his talents to develop explosives for the Haganah underground to help defend against incessant Arab attacks. Later, during the War of Independence in 1948, he became deeply involved in the Science Corps of the Israeli Defense Forces (IDF), Hemed, and for a time commanded it as a lieutenant colonel.

In a 2005 article for the Journal of Biological Chemistry, Katzir said he knew he would wind up combining his career as a scientist with that of a Zionist activist.

“Already in high school it was clear to me that, like all those of our generation, we would have to play our part in activities that had nothing to do with learning but were bound up with the national renaissance. …I was caught up in the ideological and political ferment of that time. Jews were returning to their ancient homeland after 2000 years… In this exhilarating atmosphere, we threw ourselves with great enthusiasm into activities aimed at fulfilling the Zionist dream.”

Born Efraim Katchalsky in Kiev, Ukraine in 1916, Katzir immigrated to Israel with his parents in 1922. He grew up in Jerusalem and enrolled in the Hebrew University after high school, where he studied biochemistry and organic chemistry. In 1941, he completed his Ph.D. thesis on simple synthetic polymers of amino acids and spent time learning at the Polytechnic Institute of Brooklyn, Columbia University and Harvard University.

Soon after his inauguration, President Katzir joined his precedecessor, Zalman Shazar – born Shneur Zalman Rubashov to a Chabad family in Belarus –at a Chasidic gathering in Kfar Chabad. Katzir already knew the movement well from his friendship with Chabad’s Rabbi Shlomo Maidanchik.

Against the backdrop of continuing tensions following the 1973 Yom Kippur War, Katzir used the opportunity to inspire enthusiasm for Israel’s cause, and to encourage the vital role he felt Chabad needed to take.

“Chabad Chasidim represent the best of Judaism. You are role models for the Jewish people. May you be able to continue being role models with your blessed activities and efforts.”

That night, the Zionist activist and newly appointed president of Israel tipped his cap to the movement as “the true Zionists.”

“Chabad is true, authentic Zionism. It supports the fundamental and essential roots of Zionism which arises from the daily prayers of Jews for a return to the land and the redemption.”

It was to be one of many visits to the Chabad village.

In an interview earlier this year with a Chabad publication, Katzir reaffirmed his affection for Chabad and expressed admiration for the scope of its activities.

Besides the 1973 Yom Kippur War, Katzir was President during some of Israel's most dramatic moments, including the rise of the Likud party in 1977 and Egyptian president Anwar Sadat’s visit to Israel later that year. He declined to stand for a second term citing his wife's illness, and was succeeded by Yitzhak Navon in 1978.

Returning to the Weizmann Institute after his term, Katzir was named Institute Professor, a prestigious title awarded to scientists who made significant contributions to science or Israel. He authored hundreds of scientific papers and served on the editorial and advisory boards of many scientific journals.

Also recognized abroad, he was a member of the Royal Institution of Great Britain, the Royal Society of London, the National Academy of Sciences of the United States, the Academie des Sciences in France, the Scientific Academy of Argentina and the World Academy of Art and Science. He was visiting professor at Harvard University, Rockefeller University, University of California at Los Angeles and Battelle Seattle Research Center.

Among his many awards, Katzir received the Rothschild and Israel Prizes in Natural Sciences, was the first recipient of the Japan Prize in 1985 for groundbreaking research that directly led to the development of many medicines, and was appointed to France’s Order of Legion of Honor.

Although successful as a scientist, Katzir was grateful for his diverse endeavors. “I have had the opportunity to devote much of my life to science. Yet my participation over the years in activities outside science has taught me there is life beyond the laboratory,” he was quoted as saying by Annual Reviews magazine.

Katzir leaves behind a son, Meir, who is a professor of mathematics at the Haifa Technion. His wife, Nina, died in 1986 and his brother, renowned chemist and professor Aharon Katzir, was killed in a terror attack on Lod Airport in 1972. The Katzirs also had two daughters who both died tragically.

“He was a rare combination of personal ability and public mission.  He divided his life between science and security, between voluntarism and education, between achievements and modesty.  …His life was one of struggles, challenges, successes and accomplishments, all of which were for the good of the State of Israel.  …The State of Israel and its citizens have lost one of their dearest sons… He was an historic figure who contributed to the development, security and establishment of the State of Israel,” said Prime Minister Binyamin Netanyahu at Sunday’s cabinet meeting.