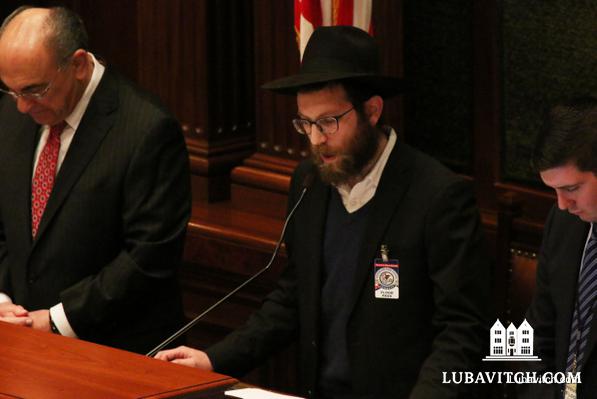 On January 25th, Rabbi Avraham Kagan, director of government affairs for Lubavitch Chabad of Illinois and Rabbi of Chabad of River North, delivered the invocation at the joint session of the Illinois House of Representative and Senate in Springfield, Illinois. The invocation preceded Governor Bruce Rauner’s annual “State of the State” address.

In his prayer, Kagan, alluding to the state of gridlock and the violence plaguing Chicago, called on the lawmaking body to recognize that their “privileged position is actually the performance of one of the seven divine laws given to us by G‑d at the dawn of civilization to ensure a peaceful and moral society.” As one of the seven Noahide Laws, maintaining order is a task incumbent upon all human beings.

The office of the governor as well as numerous state legislators thanked Rabbi Kagan for his ongoing support and service to the elected officials and their staff.

Related Articles
View All
Illinois Governor Takes Dreidel for a Spin
Illinois Governor Bruce Rauner Gets a Gimmel
Moving Forward
“Pray for the welfare of the government, for were it not for the awe of it, men would swallow one another alive.” (Ethics of the…
Get Inspiration to your inbox!
Newsletter
Join our weekly newsletter for inspiration and updates
Donate
Find Your Local Chabad Center
Subscribe
|
Log In
Chabad
About Chabad-Lubavitch
About Chabad Lubavitch
The Rebbe
Headquarters
Magazine
Magazine
News
News & Updates
In The Media
Impact
Social and Humanitarian
Social and Humanitarian
Education
Education
Community
Community