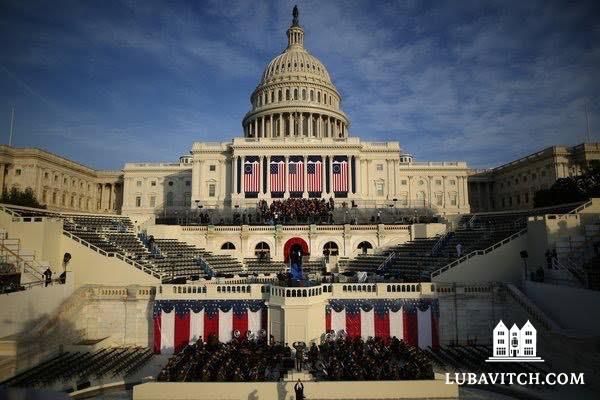 “Pray for the welfare of the government, for were it not for the awe of it, men would swallow one another alive.” (Ethics of the Fathers, Chapter 3)

As the country prepares for the inauguration of a new president following a deeply divisive campaign season, it is time focus on bringing healing and unity between all citizens of the United States, and to put our support behind the new president for the benefit of our country.

In a public address on January 15, 1981, as the U.S. was transitioning to President Ronald Reagan, the Rebbe spoke about the transition of power in this country, and reflected on the words E Pluribus Unum, which appear on the seal of the United States and on its currency.

“This motto,” said the Rebbe, “sums up the American democratic process. A government is installed when the ‘pluribus, the many, participate in free and true elections. The purpose of the electoral process is the resulting unity that will be its consequence, the ‘one out of the many.’ Once the majority has expressed its choice, even the dissenting minority must unite and align behind that decision.

“And the reverse is also true: The victorious presidential candidate is not only the president of the majority that elected him, but also of the minority that opposed him. He will fulfill his presidential duties with complete integrity, not differentiating between those who voted for or against him. He is the President of the United States of America — of all Americans.”

Over the years, political leaders of every stripe sought the Rebbe’s counsel and blessings. While he never endorsed any particular candidate, he urged anyone running for public office to appreciate and utilize the privilege and the opportunity given to them to serve the people. He advised them to embrace the axiom, engraved on our currency, “In G-d we Trust,” and thus contribute to a society where morality, justice, goodness and kindness towards all humanity, prevail.

We wish President Donald J. Trump, his family and his new administration much success and G-dspeed.