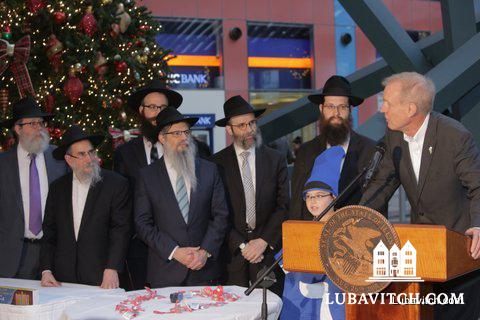 All News
Go to Photo Gallery
By Staff Writer , Illinois

This week, Illinois Governor Bruce Rauner sent Chabad’s annual Chanukah event at the Thompson Center into a spin. This year, the event took place before Chanukah and included a grand game of dreidel. Chabad’s public Menorah will be on display at the center through January 1.

The Israeli General Consul to the Midwest, Aviv Ezra, state legislators, and a dozen rabbis also attended the education-themed December 12 celebration. Rabbi Avraham Kagen of Chabad of River North and Chabad’s Government Liaison introduced the governo,r who greeted the participants.

“As families celebrate this year, they will light candles to honor the miracle of Chanukah and remember when light conquered darkness, good defeated evil, and freedom prevailed,” Governor Rauner said. He then proceeded to spin the dreidel, which landed on a fortuitous gimmel.

Consul General Ezra drew a comparison between Chanukah’s fame as a holiday of miracles and the miracles Israel experiences almost daily. He thanked the “Consulate Rabbi,” Rabbi Menachem Slaviticki, who runs the Chabad Israeli Center in Chicago.

Rabbi Meir Moscowitz, regional director of Chabad-Lubavitch of Illinois, spoke about the connection of Chanukah and education, quoting what the Lubavitcher Rebbe had written to then-president Ronald Reagan, “No true education can omit the moral and spiritual dimensions of human life. Education must include wisdom, love, decency, moral courage, and compassion.”

The day’s celebrations concluded with dancing and a spin of nine-year-old “live dreidel” Mordechai Moscowitz.