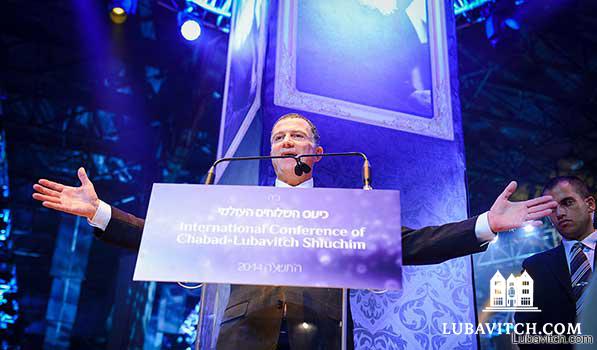 If you’ve never known the fear of being denied the ability to wrap tefillin, you may have a hard time wrapping your head around the unbridled joy that comes with the freedom to do so. But it is what brought thousands to their feet at the closing event of the International Conference of Shluchim Sunday evening.

Guest speaker Yuli Edelstein, Speaker of the Knesset and a former refusenik, was sentenced to three years in a Soviet labor camp in 1984. When one of the guards tried breaking his tefillin boxes over his knee, the otherwise stoic survivor “lost it.” He tried to fight back, earning himself 15 days in solitary confinement.

The story held profound resonance for many of the 3,026 Chabad shluchim (representatives) at the event. Among them were grandchildren of survivors of the gulag, persecuted by the communists for asserting their identity. Among them, too, were children of unaffiliated Jews who eventually found their way back. Different backgrounds, different stories, but for every Chabad representative the impulse is the same: joyful for the freedom to access, express and communicate yiddishkeit.

To Edelstein, there was nothing heroic about fighting for his tefillin. “You would do the same if something so dear to you was being taken away.” The irony, he observed, is that today, when no one is taking our tefillin away, many Jews don’t even know what they are. “This is a different world, a dangerous world. Less dramatic than being in a prison corridor with five guards,” but the mission of Chabad, Edelstein said, remains constant: teaching Jews so they know what tefillin are, and what shabbos candles are.

It is a mission celebrated by shluchim year-round, manifest in their day-to-day activities, sharing mitzvahs and communicating Jewish values in their respective communities around the world. Once a year they get to celebrate together at Chabad-Lubavitch Headquarters. This is where it all began some 70 years ago with a small handful of Chasidim who embraced the Rebbe’s challenge to become agents of transformation.

The banquet dinner, an elaborate, dramatic affair, is in itself no small nod to the challenge of transformation: the South Brooklyn Marine Terminal is radically recreated into an elegant venue for one of the largest sit-down dinners in the state; speakers are fired up about the magic of being a part of something so imaginative, and the event provides Shluchim, lay leaders, partners and friends—more than 5,000 in total, a perceptible experience of the triumph of transformation.

“The Rebbe was looking to make radical change,” said Rabbi Moshe Kotlarsky, Chairman of the Conference Committee in his opening remarks at the banquet. Today there are some 4500 couples, emissaries of the Rebbe committed to achieving positive transformation in 87 countries. And their ranks keep growing. In 2014, 400 young shluchim took up new positions, and another 200 applications are pending. Young couples are waiting their turn to make an impact.

More interesting is the evolution of shlichut, “the mission.” It is a sign of the times that in addition to opening in new locations—Ghana, Angola and Kenya were among the new ones announced at the banquet by Rabbi Kotlarsky, Vice Chairman of Chabad’s educational division—new appointments are now demographically driven.

“Until now, shluchim would take up positions determined by geographic need. Now we have appointments to particular demographics,” he shared in a conversation before the Conference. Instead of rediscovering the same child at different life stages, Chabad is now capable of engaging the individual at every level, ensuring that as children grow, the opportunities to affiliate and lead grow with.

If the mix of guests at the banquet dinner is any indication, Chabad has clearly won the recognition and support of a great diversity of people—among them Jews of every stripe, and non-Jews as well. Blogging after the event, one guest wrote: “I disagree with Chabad about many things. But it doesn’t matter. Not to them, and not to me. What binds us is love. They love me simply for being a Jew.”

Love was the theme of the keynote address by Rabbi Dovid Dubov, Chabad representative of South London, serving the Jewish community of Wimbledon. “In tennis, love equals zero. But at Chabad of Wimbledon we say that if you want to raise a racquet, serve with love.”

Chairman of Chabad’s educational and social services division, Rabbi Krinsky pointed to the Shluchim’s focus on promoting Jewish education and Jewish in-marriage, thus “securing the Jewish future for generations,” as the only authentic response to the high rate of attrition within the Jewish community.

He deplored “the tendency on the part of so many to resort to half measures and settle for a quick fix.” In a reference to one Jewish leader’s comments ridiculing the fight against intermarriage as “going against gravity,” he applauded the Rebbe’s shluchim for making the case that when empowered by timeless Torah values, “you can even defy gravity.”

During their five days in Brooklyn the shluchim feasted on a smorgasbord of innovative ideas and new tools to advance their educational, social and community building concerns. Their spirits buoyed, they return to their disparate communities suffused with new enthusiasm for making impact and achieving radical change towards the fulfillment of the Rebbe’s vision: a world redeemed by love, as expressed in the practice of goodness, kindness and holiness.