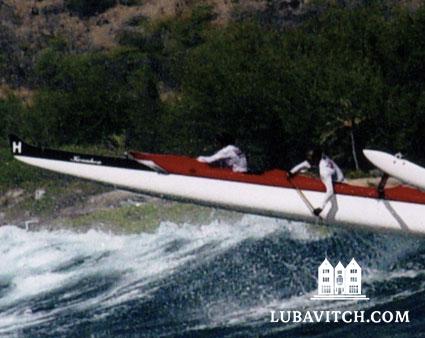 To build the abs, the muscle and cardio endurance it takes to cross 41 miles of Pacific blue in an outrigger canoe race, Karen Dunai maintained a punishing fourteen hours a week training regimen, but a spiritual crisis that pitted her sport against Rosh Hashanah nearly pushed her to the limit.

Her Lokahi Canoe Club teammate, Carol Jackson asked a simple question. Had Dunai noticed the date of the season’s most important race, the 6-hour, 41-mile Na Wahine O Ke Kai? It fell, said Jackson, on a Sunday – which would not conflict with Dunai’s new commitment to observing Shabbat—but rather on some holiday called “Rosh Hashanah.”

Dunai didn’t know what keeping Rosh Hashanah entailed. Maybe it was a holiday like Chanukah where all manner of work is permitted. Maybe she could light a candle and eat some holiday food and still be at the race she and her team had been working towards since January.

Dunai called Michoel Goldman, a Chabad rabbinical student interning over the summer with Chabad of Honolulu under the auspices of Rabbi Itchel and Pearl Krasnjanski. Goldman broke the news. Rosh Hashanah’s observance pretty much follows the Shabbat pattern, with a few exceptions like cooking and carrying. Paddling in a canoe race and observing Rosh Hashanah do not mix.

There’s a bit of history behind Dunai’s predicament. A Beverly Hills baby, Dunai said she turned away from Judaism at the tender age of four when someone told her about the Holocaust. Twelve years ago, Dunai moved to Hawaii. When Fanny was old enough for school, Dunai looked for a Jewish environment for her daughter and found Chabad. Her daughter’s teachers, young women raised in Chabad homes and educated in Lubavitch schools, are “lit up from within an it shines through. It is so obvious what they are doing with their lives is right,” she said, and they sparked within Dunai a desire to reclaim that which she had dismissed decades ago.

Concurrent with her rigorous law school schedule, her fanatical canoe training, Dunai took up studying Chasidic philosophy with her daughter’s teachers. “She’s got an unbelievable passion for Torah and Yiddishkeit,” said Goldman. Logical and analytical to the core, she pushed Goldman to teach her Jewish laws, from their Torah source through its Talmudic gyrations to its application.

Cool logic helped Dunai arrive at her choice. Yes. Her teammates were counting on her. Months of work were at stake. When Dunai was in the race last time, Lokahi placed 8 out of 73 competitors from all over the world. When Dunai skipped a year, they dropped to 26th place. “There was no decision to be made,” said Dunai, “the law is the law. I cried and cried and called my coach.” Rosh Hashanah came first. “He was speechless.”

Dunai bristles at any suggestion that living an observant life forces her to repress her love for paddling. “My talent for paddling is from Hashem, and I thank Hashem everyday for it,” said said. To use that talent and disregard Jewish law, “I feel it would be too ungrateful.”

Contrary to her fears, Dunai’s teammates, many of them Catholic, respected her choice and accepted it, but not before asking her if she could, perhaps, find a loophole: sin on Rosh Hashanah and make amends on Yom Kippur. Let the Day of Atonement live up to its name. She explained that Judaism doesn’t quite work that way. “If I had been flim-flammy, my commitments would have been a sham. They wouldn’t respect me or Judaism,” she said.

Just as Dunai felt obligated to her team, she conducts herself with an awareness that what she does has an impact on her other “team,” the Jewish people. “What I do has repercussions, because we are all one.”