Building Bridges Across the Ocean with Israel Connect 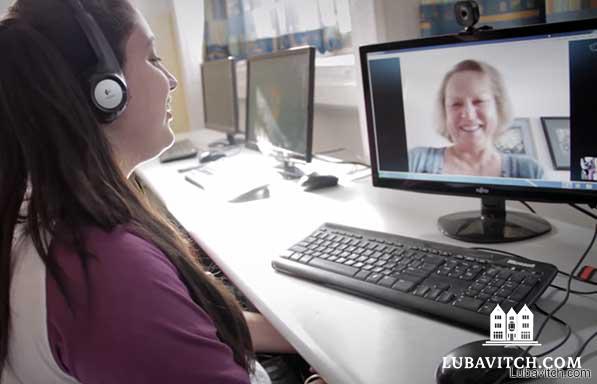 During their weekly Skype session, an Israeli high school student and her mentor enjoy some light-hearted banter.

An innovative program recently established in canada is fast becoming an international story of building bridges that answers with a resounding “yes.”

Rabbi Sender and Sarah Gordon, Chabad emissaries to Ottawa, founded Israel Connect around a simple concept: North Americans who are now retired sought a way to give back to others and desired meaningful personal interaction. Israeli high school students who are falling behind in their English language skills, could not afford private tutoring. The solution? Utilize modern technology, bridge the gap, and connect them.

In 2011, the Gordons began pairing Canadian retirees with disadvantaged Israeli students. Today, 200 high school students and 200 volunteers have formed unexpected friendships. Using a specially-developed curriculum based on Jewish topics, volunteers help Israeli students through 15-minute weekly Skype sessions. Students get to converse in English with their volunteers who, in turn, enjoy the company of Israelis young enough to be their grandchildren.

Both learn about their heritage, and the unusual pairings have created meaningful relationships spiritually and emotionally enriching to both. “It is heartwarming to see how eager the members of the community are to help students in Israel, whom they have never met,” says Rabbi Gordon. “The connections go beyond the weekly meetings.”

Implemented through an Israeli network of schools called Reshet and other school chains like ORT and Bnei Akiva, Israel Connect matches each volunteer with one student in Israel. Generally these students are of poor socio-economic backgrounds without much opportunity to practice their English—an important skill in today’s society where many high school and university-level textbooks in Israel are in English, along with a significant one-third of high school graduation tests. Research is also conducted in similar fashion.

“[It] is a real challenge that we often encounter,” explains Liora Vitos Koren, founder and CEO of the Yerucham Association for the Future of Education, a non-profit organization that has adopted 19 Israeli schools with over 4,000 students in at-risk areas.

“Unfortunately there is a general shortage of English teachers,” Koren continues. “Exposure to English [in at-risk areas] is very minimal to non-existent; the parents do not speak the language, there are no trips abroad, there are no English speaking relatives.”

After partnering with Israel Connect and observing its successful implementation in schools within her organization’s scope, Koren believes the program can “serve as a vehicle for a better future for our students.”

For many schools, participation in the program is a point of pride and a draw for families. The Nes Tziona Chabad Elementary school in Rishon Litziyon advertises the program as an after-school English enrichment opportunity for their eighth grade class.

Ayali Halperin, a ninth grader from Jerusalem, is grateful for more than the English proficiency she’s gained. “I’m a very shy person and never had the confidence it took to really learn a language. Through meeting weekly with my volunteer in Canada, I feel much more comfortable. She is a caring person and offers to help beyond the Skype meeting.”

Retired professionals represent a much underused and undervalued precious resource. Putting their experience and knowledge to work for the benefit of others is perhaps the most exciting aspect of this program.

Raina Feig, a semi-retired dental hygienist with no past teaching experience, feels empowered in helping her young student improve her English-language skills, and appreciates that her web-chat sessions often extend beyond the set curriculum.

“We have a lot of fun and we are constantly joking and laughing,” reflects Feig. “We discuss where we come from and our different countries and cities. We truly enjoy speaking with one another.”

Rabbi Gordon isn’t surprised by the mutual endearment. He considers it “a win-win proposition.” With curriculum based on the weekly Torah portion, upcoming Jewish holidays, Jewish history and the land of Israel, there’s little shortage of conversational springboards.

And Israel Connect has certainly inspired conversation. Premiering in 2011 with ten students and ten volunteers in Ottawa, schools throughout Israel took swift notice of the program’s success through rising English grades. Three years later, the program is now available to Chabad centers in seven U.S. and Canadian cities. Israeli school boards are negotiating with Chabad of Ottawa on the program’s expansion throughout all of Israel.

As retired North American seniors and Israeli teens connect over the web, the differences in age and background reveal themselves as enhancements to Israel Connect’s process, solid ground for building secure foundations of a connected Jewish future. As the participants come to know one another, they end up communicating in a language more universal than English—one that’s spoken from the heart.