Lifeline to Israel’s Most Vulnerable 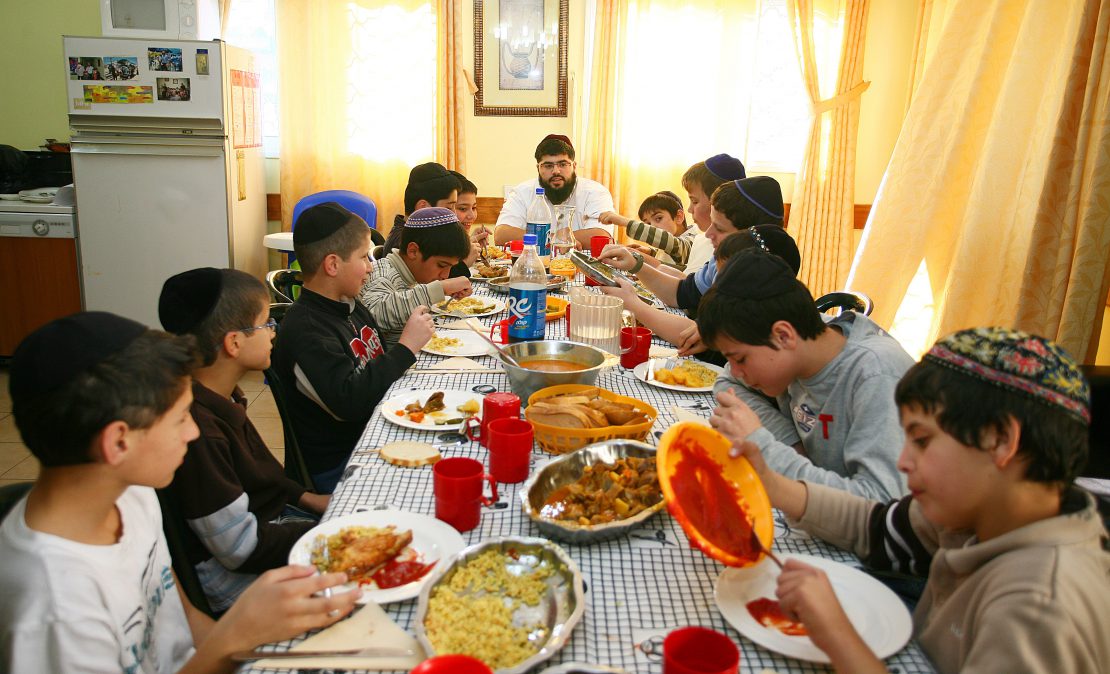 At the dinner table in one of Ohr Simcha’s family foster homes.

The sprawling grounds dotted with palm trees, a soccer field, tennis court, gym park and animal farm make it look like any well-appointed boarding school. Situated in the center of Kfar Chabad near Tel Aviv on 25 acres, Ohr Simcha is home to 270 boys, 5- 15 years old, at least a third of whom were removed from their parents by court order. The youngest and most vulnerable live with foster families in private, spacious residences designed to facilitate a functional, healthy family dynamic.

Sarit and Adael Shemesh are one of nine couples, foster parents at Ohr Simcha, Two years ago, when she was introduced to the 10 year-old boy who would become her charge, Sarit’s mind raced with reservations. Obese and critically diabetic, Ronen came with more baggage than she felt that she and her husband could handle. Already parenting 12 boys living with them in a surrogacy arrangement, taking on yet another child, this one with a severe physical condition exasperating his emotional troubles, seemed over the top.
“We had real concerns about Ronen, especially because we already had a houseful.” Ronen’s situation was extreme. Diagnosed with adult diabetes at age 3, his condition was ignored by an absent father and a reckless mother who had gone off to live with her Arab boyfriend, her little son in tow. After years of neglect, his blood sugar reached dangerously high levels. Ronen would require an enormous investment of medical attention. Sarit and her husband took a deep breath. “We realized that if Ronen was brought to us, we may have been underestimating our capacity.”

Rabbi Zev Slavin director of Ohr Simcha, who, seven years ago conceived the idea of the Foster Family Home model, was also apprehensive when Israel’s Ministry of Welfare referred the boy to him. “We really are not set-up for children with serious physical ailments,” Slavin, told lubavitch.com. But Ronen’s story was heartbreaking. “Here was a Jewish boy going to an Arab school, who at age 10 decided he wanted to live as a Jew, and go to a Jewish school. He had terrible complications but I knew the Rebbe would expect us to figure out a way to make this work and give him the chance to turn his life around,” said Slavin.

An imaginative response to children at risk—Israel has some 300,000 such children, about 10,000  of whom are living in dormitory or foster care programs—Ohr Simcha’s Family Foster Home model has earned high marks by representatives of Israel’s Department of Welfare and Social Service, which covers about 70% of its 15.4  million NIS annual budget.

Estabished in 1971 as a dormitory school, Ohr Simcha was founded after the Lubavitcher Rebbe directed Rabbi Simcha Gorodetsky to find a haven for Uzbeki immigrants. Gorodetsky visited orphanages throughout the country: none was willing to absorb these young children. If there is no home, we will make a home, he decided.

Esther and Amit Barami, another foster couple at Ohr Simcha, described their motivation to take on 12 foster children in addition to their own biological children. “We are committed to the Rebbe’s ideals, and have always wanted to dedicate ourselves to shlichut,” said Amit. After completing his army service, Amit and Esther turned to Ohr Simcha, applying for the position.

Couples are carefully vetted. “This is not an easy calling,” says Rabbi Slavin. “We look for couples that are very stable and capable of managing this kind of dynamic, because the demands on their emotional and other resources can be draining. As well, they need to be genuinely compassionate and loving. Without that it would be impossible for our foster parents to make these children who are so badly scarred, and integral part of their family,” said Slavin.

Working in tandem with Ohr Simcha’s on-site psychologists, psychiatrists and social workers, Sarit and Adael developed a plan. For the first three months, the focus was to get Ronen medically stabilized. Shadowed by a medical attendant 24/7, Ronen was administered insulin shots every three hours. As well, they got Ronen to work on healthy living habits: a regimen of daily exercise and a diet to wean him off sugar. But Ronen flew into rages, throwing tantrums, wreaking havoc around him. “He was a kid suffering great physical and emotional turmoil, and was constantly testing us, trying to see if we really loved him and cared for him,” said Sarit.

Like many of the other children at Ohr Simcha, Ronen hadn’t had any normal socialization, and no idea of personal hygiene. In the five years she’s been at Ohr Simcha, Esther Barami, like Sarit, has parented children who, she says, needed to learn the abc’s of normal living. “We teach them to shower, and how to shower, to change their underwear every day and to use a fork instead of their hands at the table.”

Those lessons are absorbed somewhat smoothly as children become acquainted with family routines like breakfast and bedtime, participating in chores and errands, shopping for new shoes, clothing, and also family fun. But other more ingrained behaviors are harder to weed out. “The boys fight a lot,” Brami says, “and sometimes, they get violent.” Esther and Sarit, and their spouses, have learned how to help the children manage their anger and their violence.

Once in a while, there are surprising moments of tenderness. “Sometimes, Ronen will acknowledge that we worry about him, and that no matter how often he runs off, he knows we are here for him.” Two years after those first terrifying months, Ronen has come a long way. Today, he is motivated to become healthy, jogs and watches his food carefully. His blood sugar has stabilized, and he has lost a lot of weight. “I won’t say that he doesn’t have flare-ups, or that his problems are all behind him. They aren’t. But there’s been real growth.”

Ronen will continue living with Sarit and Adael until he reaches age 15, when children at that age move into the dormitory facilities at Ohr Simcha. By then he will have known the experience of home, of safety and love. “Here, for the first time in my life,” he said when asked what Ohr Simcha means to him, “I was able to work out my problems because the people here actually believed I could.”

A designated program by IDF’s volunteer services, Ohr Simcha’s families are visited weekly by IDF soldiers doing their national service. “They come to help out, and the children love these visits,” says Slavin, who urges anyone he knows visiting Israel, to come to Ohr Simcha. “The children are thrilled when people come to visit, to spend some time playing ball with them, or hanging out together.”

Some time ago, Rabbi Slavin took the boys to visit an army base. As students toured the base, Rabbi Slavin chatted with Yagil Alon, an IDF officer in the national reserves who happened to have been on duty that week for his annual three week service.

Slavin described Ohr Simcha to Alon, and spoke of the children’s difficulties. “I know, I know,” said Alon, now a high profile, senior advisor for a major international security consulting firm, and the father of two. Then he explained: at age nine, he was an elementary-school dropout hanging out on the streets. His father was dead of an over-dose and his mother was clinically depressed.

Rabbi Slavin is sober about his expectations. “Not all the boys here may go on to Yagil’s success. But we give them the best chance they can get to make it happen. Our objective is to give them the tools they need to make a life, build a family and a future for themselves.”

Visitors who would like to volunteer at Ohr Simcha while visiting Israel can call: +972546535770 or email: info@ohrsimcha.org