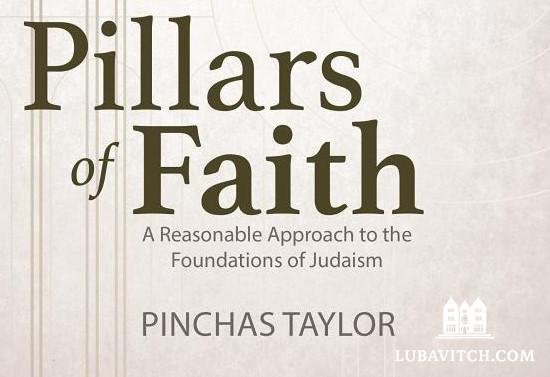 Pillars of Faith:
A Reasonable Approach To The Foundations of Judaism
Pinchas Taylor
Mosaica Press, 421 pp

Many years ago an apikoros (heretic) moved into a Jewish town, and word of his presence soon spread. The local Rabbi had never met an apikoros before. Intrigued, he came to the apikoros and asked him, “Are you really an apikoros?”

“I’m interested in your perspective on a certain tractate in the Talmud,” the rabbi said earnestly.

“Oh,” said the rabbi disappointedly. “What about Mishna, can we discuss that?”

“I don’t do Mishnah,” said the apikoros.

The rabbi tried again. “What about the Torah? The Bible? Rashi?”

“You don’t get it,” answered the apikoros again. “I’m an apikoros, I don’t do that stuff.”

“My dear friend, forgive me,” said the rabbi. “To reject the spiritual validity of Judaism you must first be a scholar. You’re not an apikoros. You’re an ignoramus!”

And this is exactly where Pinchas Taylor’s new book Pillars of Faith: A Reasonable Approach to the Foundations of Judaism, proves useful. It gives average readers the ability to feel like they have a basic grasp in their understanding of Judaism. It takes on the wide range of modern-day challenges posed to belief in Judaism and gives readers the tools they need to feel confident in forming opinions on these topics in a way that is grounded both in Torah and rationality. If there was ever a concept that you took issue with in Judaism, you’ll probably find it dealt with in some capacity in Taylor’s book. The titles of his chapters include Evolution, The Oral Tradition, Women in Judaism, and Resurrection Of The Dead, among many others. Though the 17 topics in this book are organized under the headings of G-d, Torah, Jewish Identity, and The World To Come, each chapter succinctly deals with the topic at hand in approximately 25 pages or less and can be approached in a stand-alone fashion. Taylor’s sources range from scientific, to archeological, to sociological, to historical, to simply rational. He strives to give the reader an understanding of how, within each of these topics, belief in Judaism can be accepted on a logical basis.

Anyone with some level of involvement in Judaism will find that this book addresses topics that come up quite frequently in conversation. Over the last week, since reading this book, I have shared with a group of students a fact about the humane nature of kosher slaughter that was previously unknown to me:

“Remarkably, it has been discovered that in kosher animals, and only kosher animals, the carotid and vertebral arteries actually merge, so the schechita cuts off all blood flow to the brain, allowing the animal to die immediately and painlessly.” Ever wondered about that enigmatic claim that the resurrection from the dead that will happen through the luz bone, a small bone in the spine? Well, as Taylor points out, “In 2008 researchers sought to bring back a variety of extinct animals. . . the bulk of the discussion surrounding the question of whether to carry this out or not was not based on whether or not it was possible, but on the ethical ramifications of doing so.”

Taylor points out that bones carry the DNA necessary for rebuilding the body in the future and quotes a researcher specializing in ancient DNA as predicting, “If you can do a mammoth, you can do anything else that’s dead, including your grandmother.” Though I wouldn’t call this conclusive evidence, it frames the concept of resurrection from the dead in terms that the rational mind can appreciate.

Yet, in reading this book cover-to-cover I was struck by the sheer range of academic fields Taylor draws on for evidence. Now, without questioning his level of expertise in any one subject, I’m not sure it’s possible that he (or anyone, for that matter) is an expert in evolutionary biology, astrophysics, history, archeology, anatomy, DNA analysis, food science, women’s studies, chemistry, ethics, and psychiatry, to name a few. And while the arguments of the book appear to be sound and evidence-based, as someone who is not an expert in any of these fields myself, it’s hard for me to assess the extent to which they accurately represent the conclusions of any particular field. The book often reads like Taylor cherry-picked those studies that proved his points, despite the fact that they may not be the most commonly held opinions of that particular field. For the scholar who is a true expert in any one of the fields discussed in the book, I imagine the superficial treatment of their area of expertise would be unsatisfying.

As much as I enjoyed the book (and believe it will be engaging and informative for most readers), I was puzzled by the marketing techniques employed. The title, Pillars of Faith, implies a scholarly and rigorous treatment of Jewish faith that would appeal to a far more limited audience. Furthermore, such a reader would likely be disappointed at the sweeping attempt to cover such a wide range of subjects in a such a short amount of space, rather than providing a more thoughtful, serious treatment of narrowly constrained questions. As someone who works with skeptical college students, I can assure you that aside from those who are actively searching for a deeper understanding of spirituality, most would never pick up a book called Pillars of Faith. However, if this book was called something more representative of its actual content, for example, Answers to All the Questions You Ever Had About Judaism (or something of the sort), the prospective audience would widen greatly.

That being said, Pillars of Faith certainly offers the average reader a valuable lens through which to view Judaism. The questions asked are those that come up regularly in today’s Jewish world and the answers given rest on persuasive arguments and what will likely be satisfying enough for the majority of readers. For those with an interest in engaging more in their Jewish identity, or for those who seek to help others do so, Taylor’s book offers a pathway that will give the reader valuable tools in that pursuit.