Something From on High 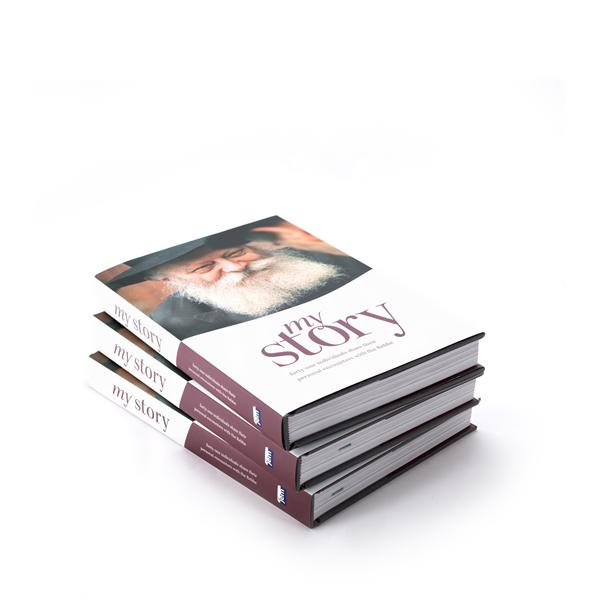 All News
By Miri Birk

About a year ago, a new task was added to the pre-Shabbat to-do list at our Chabad House: printing out Jewish Educational Media’s (JEM) Here’s My Story interview. This double-sided, single sheet of paper, sharing a unique story of an individual’s experience with the Lubavitcher Rebbe, made its rounds in the Chabad House every Shabbat. Almost invariably it was a point of connection for one of our guests—perhaps they shared a similar life situation to the interviewee, came from the same town, or even knew the individual profiled.

When JEM announced the publication of My Story, a compilation of forty-one of these interviews into book format, I have to say I wasn’t planning to buy the book since I had read the interviews every week. But when I received it for review, I was impressed. The stories improved in their expanded format and new stories caught my interest.

When I brought My Story to our Chabad House intending to read it over Shabbat, I wasn’t even able to put my hands on it. Israeli travelers, professors, college students and Lubavitchers alike, picked up the book, found a quiet place on the couch, delved into a captivating story, and by the end of the day were reflecting on how the book had touched them. Though My Story doesn’t have to be read cover to cover—each story stands on its own—reading the book in its entirety leaves the reader with a profound sense of connection to the Rebbe.

One element missing in My Story is the story behind the story—the discussion of the process of creating this book, intriguing in its own right. Though there is a short “About” section at the end of the book, little context is given to the collection of these stories. Who is the editor? How did they choose whom to interview and include in this book? Are there archives of the stories open to the public and can the full transcripts be accessed? These questions are relevant to readers and I hope will be added in an editor’s forward in a later publication.

The stories themselves vary widely in their scope and message. Some relate a single, though profound, interaction with the Rebbe, while others describe a lifelong relationship. My Story presents insight into the Rebbe’s depth of knowledge on a wide range of subjects, his keen sensitivity and his ardent devotion toward every person. However, what this book highlighted most powerfully was something else—what it meant to be someone who accepted the Rebbe’s direction in your life. Many people met the Rebbe, received dollars to give to charity from him, and even merited private audiences, but what these forty-one individuals shared was that they allowed the Rebbe to guide them in their extremely varied and disparate lives. And it is their reflection on that experience, in many cases toward the end of their lives, that makes this book so powerful.

One story that I found particularly touching was that of Mrs. Rivka Tillim, who came to the Rebbe as a young girl living in Brooklyn. She had contracted a cough that had worsened to the extent that she became hoarse and eventually, mute. She came to the Rebbe with her entire extended family—parents, grandparents, aunts and uncles—all squeezed into the Rebbe’s office, extremely worried about her predicament. The Rebbe requested that they all leave except for Rivka, and he began to speak to her:

He asked me how old I was, what I was studying at school, what I liked to do in my spare time. And I began to answer him in a whisper.

He went on to ask me what I wanted to do when I got older. I replied, “I love little children, and I hope to be a mother and a teacher.” He responded that this was a very good goal, and this is what I should do.

As the conversation progressed, my voice became strong… The only way I can describe it is: He spoke and I answered. I can’t explain it in any other way.

When she exited the Rebbe’s office with her voice regained, her family was ecstatic. But as she grew older her parents resisted her desire to go to a teachers’ seminary.

They said, “What for? Get an office job and make some money!” My reply was, “Remember, the Rebbe told me that I should teach young children…”

She reflected later, crediting the Rebbe for allowing her to fulfill her life’s calling. In her words:

…the real miracle of my story: more than a mute girl who started to speak . . . I became who I was meant to be.

Our society tends to embrace two, equally untrue, mantras when it comes to the idea of a life mission—becoming who we’re meant to be. On one hand, we tell children they can be anything they want to be. This statement is false on its face and sets many up for a life of disappointment. It also implies that any direction one chooses is equally as good as another. Whichever path one takes in life is sanctified simply because it was chosen. This is perhaps more nefarious because it robs people of the goal to envision and live a meaningful life.

Yet simultaneously, we feed a somewhat contradictory view that the measure of a person’s life is in their output, or worse yet, their capacity for consumption. The seemingly benign but insidious phrase, “quality of life,” comes to imply that once one can no longer impact the world or derive benefit from it to the extent that they could before, their life is of lesser value. This utilitarian philosophy has permeated our society in truly frightening ways.

One begins to appreciate the Rebbe’s wholly different view of the individual and their life’s path through reading the stories of these individuals in My Story. The Rebbe saw each person as a world unto themselves with tremendous potential and immanent purpose. Mr. Freddy Hager, a diamond dealer from London, sought the Rebbe’s counsel on many matters. He describes his first meeting with the Rebbe:

I’ve heard others remark that they’d come to visit the Rebbe, expecting to become acquainted with a great man, but what actually happened was that through their encounter with him, they became acquainted with themselves. They found some sort of peace; they found their true inner selves.

The Rebbe identified one’s talents—a great skill. He also honed those talents—an even greater art. Greater yet, though more subtle than either of these, was his ability to see each person as part of a bigger picture. He guided them to use their talents not just for a the greater good in a general sense, but in order to improve the portion of the world that was meant for them specifically.

The story of Rabbi Nachman Bernhard is particularly powerful in illustrating this point. Rabbi Bernhard tells of his relationship with Rebbe spanning several decades. One of his first questions to the Rebbe concerned his career. He felt torn between pursuing a career in Jewish education, returning to yeshivah for a life devoted to study, or accepting a pulpit in South Africa—a decision that would compromise, he felt, the education of his own children because of its remote location.

Given that Rabbi Bernhard, at the time, was not coming to the Rebbe as a member of the Lubavitch community, one may have expected the Rebbe to advocate for one of the first two options. But the Rebbe advised him to accept the post in South Africa:

“There is a fire raging in Jewish life today, and anyone who has the ability help extinguish it must do so…. You have no right to seclude yourself and focus on becoming a Torah scholar. If G-d has given you the ability to be the leader of a community, then that is what you must do.”

…I was not ready to concede, so I quoted the verse from the Song of Songs, “You’re making me a guardian of the vineyards, but I haven’t looked after my own vineyard!”

“You have an assignment from Heaven. One hundred thousand Jews are in your hands!”

My Story also prints the letter of Rabbi Bernhard’s teenage daughter Adeena, urging the Rebbe to consider the value of her family’s move to Israel. Her concern was for the sake of their family, but in particular, the sake of her father and his spiritual desires. The Rebbe’s words here regarding her father are particularly percipient:

I have no doubt that he could feel in his element only in a place where he can fully utilize the knowledge which he has acquired and the qualities which G-d has bestowed upon him. That is, to utilize them in the fullest measure for the benefit of the many. By comparison with this, personal amenities — and I mean this also in a spiritual sense — are not the decisive factor and perhaps no factor at all…

Life is made up of a series of decisions. We make these decisions based on how we feel, what we think we need, and on our better days, what we think is right. To be guided by the Rebbe is to recognize that in all of the ways we make decisions, we are confounded by our own subjective nature. To be guided by the Rebbe means to recognize that we are part of something bigger than ourselves.

People came to the Rebbe, and today they read stories of the Rebbe, in search of many different things—wisdom, guidance, love, insight, inspiration. My Story communicates all of these things. But to describe the Rebbe in these terms is like the story of the blind men and the elephant. Each touched a different part of the elephant and were convinced it was something else—a wall, a spear, a snake, a tree, a fan, a rope. Each was partially correct, but each also missed the larger truth. What the Rebbe is may be hard to put into words, but is perhaps best captured in the directive given by Rabbi Yosef Wineberg to Rabbi Bernhard before he went to meet the Rebbe for the first time:

“Rabbi Bernhard, before you go in, you have to understand why Chasidim come to see the Rebbe. We don’t come for his wisdom alone, because there are lots of wise men in the world. We come to hear something that comes from on High.”