Birkat HaChamah, The Blessing of the Sun, 2009 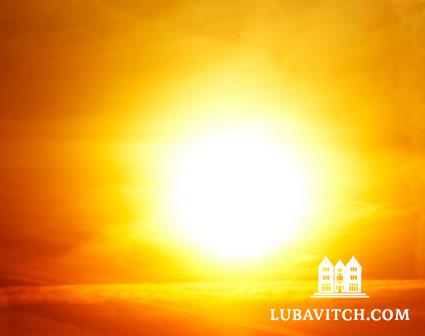 Here’s a short quiz. Read the following quote and then answer the simple question below.

“This country, with God’s help, can be self-sufficient in energy. The problem lies in the failure to utilize God’s gifts to their fullest… There is one energy source which can be made available in a very short time. Solar energy is non-polluting, cheap, and inexhaustible…it can power individual homes as well as giant factories. The United States has been blessed with plentiful sunshine, especially in the south… God has blessed this country richly, and it is our duty to use those riches to their fullest.”

The answer is d). Rabbi Schneerson spoke at length about the imperative for the United States to move over to solar energy at a gathering of Chabad Hassidim in Crown Heights, Brooklyn, on April 11th 1981.
Incredible, no? Seven years before Professor Jim Hansen first alerted the world to the threat of global climate change in his testimony to the US Senate, a Hassidic Rebbe (albeit one with a degree in engineering) was informing his followers that America needed to go solar.

There are, of course, those who will tell you that the Lubavitcher Rebbe was a prophet and a genius, and that that’s why he was able to anticipate global leaders and experts on this issue by a quarter of a century.

Maybe. The Rebbe was certainly a great Jewish leader. I don’t want to pronounce on the nature of his powers. My point, however, is that he didn’t need to be a prophet or a genius to figure out in 1981 that there was something very wrong with the way that the United States was acquiring and using energy.
America was in the middle of a recession triggered by the second big oil price spike and was just recovering from the Iran hostage debacle when the newly born Islamic Republic had held the United States, literally, over a barrel. (Or more accurately, over tens of millions of barrels.) At that moment, there was something very clearly crazy about leaving our economies dependent on a fuel whose price was incredibly volatile and which was located mostly under the land of authoritarian regimes that despised us. There had to be a better way.

So why did Rabbi Schneerson get it twenty eight years ago, when so many other smart people didn’t? The date of his utterance, April 11th, 1981 provides us with a clue. The Lubavitcher Rebbe gave his speech on solar power three days after the last Birkhat Hahama celebration.

Once every twenty eight years, this rarest of Jewish holidays gives us the opportunity to reflect on and celebrate the blessings of the sun. As the key Talmud source on Birkhat Hahama describes it:

“One who sees the sun at the beginning of its cycle…should say. ‘Blessed are You who makes the works of creation.’ And when does it happen that the sun is at the beginning of its cycle? Abbaye says, ‘every twenty eight years, the cycle begins again and the Nissan equinox falls in the hour of Saturn, on the evening of the third day, the night before the fourth day (of the week.)’” Babylonian Talmud, Berakhot, 59b.

Birkhat Hahama is a once in a generation chance to give thanks for the source of the energy that feeds all of life, that makes plants grow and which, in fossilized form, drives our cars, heats our homes and powers our industries. As Rabbi Arthur Waskow points out, it is also an occasion on which to ask, “has our generation used these gifts wisely?”

Speaking after the last Birkhat Hahama, Rabbi Schneerson was doing just that. He was challenging his listeners to use that day, an obscure but precious resource from our tradition, to think about whether their generation was using the sun’s blessings wisely.

The next Birkhat Hahama will be in three weeks time, at sunrise on April 8th, 2009. What have we done with the sun’s gifts in these last twenty eight years?

We have used them to wreck the biosphere. Combustion of billion year old fossilized sunlight in the form of oil, coal and gas emits greenhouse gases. Our unabated addiction to burning fossil fuels in our cars, homes and factories is causing famine and drought in Sub-Saharan Africa, flooding Bangladeshi peasants out of their homes and rates of species extinction that haven’t been seen on Earth for tens of thousands of years. If we don’t change course soon, unprecedented weather extremes threaten to wreak havoc on our children’s lives.

If the economic and geopolitical foolishness of continuing to depend on fossil fuels was dawning on a few people twenty eight years ago it is as clear as daylight today.
Unlike the sun, which is good for at least another billion years, oil, gas and coal are finite. We need, really soon, to develop renewable energy sources that will be in place and ready to power the world the day after oil. Otherwise, the catastrophic consequences of that moment on the global economy will make the current recession look puny.

America has fought three Middle Eastern wars since 1991, at the cost of thousands of lives. Iran has used decades of petrodollar income to reach the threshold of building a nuclear bomb. The idiocy of forking over trillions of dollars in oil revenues to oppressive terror-funding regimes has at last become too egregious for anyone to avoid.

Last Birkhat hahama, the Lubavitcher Rebbe was one of the only people to seriously confront the question “are we using the blessings of the sun wisely?” This time around, we all must.
We need to ask ourselves, our communities and our leaders: Are we using energy as efficiently as we could be? Are we making every effort to switch to clean, renewable fuel sources derived directly from the sun’s energy? Are we doing everything we could be to persuade our governments and industries to invest in solar and wind power?

Or will we choose a path towards energy that will be widely distributed, non-polluting and eventually, almost free. Will we invest in the development of the sophisticated technologies and learning organizations that can harness an inexhaustible plenitude of sunlight and the related, sun-driven, natural processes of wind and waves?

If we can give honest answers to these questions this April 8th and act on them, them, God willing, next Birkhat Hahama in 2037 we’ll be able to look back and say that we used the blessings of the sun to help bring peace, prosperity and healing to the Earth.

The article appeared on Hazon. Julian Sinclair is author, educator, and economist. He is also the co-founder and Director of Education for Jewish Climate Initiative, a Jerusalem based NGO that is articulating and mobilizing a Jewish response to climate change.

Related Articles
View All
Once in a Rare Sun: Birkat Hachamah
(lubavitch.com) The waxing and waning of the moon is regularly celebrated in Jewish life. The Jewish calendar is based on the lunar cycle, familiar to…
Editorial
Memories of Sukkot 1991
Sukkot 1991 was different. The crowds were enormous. But this time, the Rebbe remained standing in the sukkah for the next six and a half…
Editorial
The Year Of Shabbos
When the condominium towers in Surfside collapsed because of structural fatigue, the question was deafening: Were we thinking?
Editorial
Beginning With Shabbos
Start the children’s school day right, and the rest will follow.
Editorial
Toward A Resilient Jewry
What are those truths for which we are hated? And how do we build resilience against this onslaught?
Get Inspiration to your inbox!
Newsletter
Join our weekly newsletter for inspiration and updates
Donate
Find Your Local Chabad Center
Subscribe
|
Log In
Chabad
About Chabad-Lubavitch
About Chabad Lubavitch
The Rebbe
Headquarters
Magazine
Magazine
News
News & Updates
In The Media
Impact
Social and Humanitarian
Social and Humanitarian
Education
Education
Community
Community