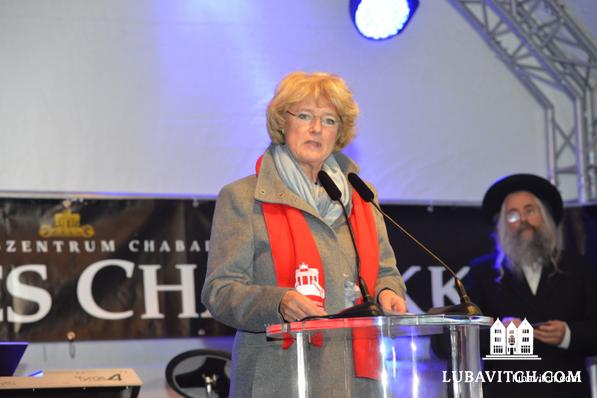 The largest menorah in Europe stands at the Brandenburg Gate, one of Germany’s most important symbols, where a torch was used to light the menorah Sunday night.

Children of Syrian refugees and Jewish children from the local community participated in the lighting which was kindled by Germany’s Minister of Culture, Professor Monika Grütters and Rabbi Yehuda Teichtal, rabbi of the Berlin Jewish community. Also present was the chairman of the Central Council of Muslims in Germany, Aiman Mazyek and representatives of the mosques in the city.

Local residents were among the two thousand people, most of them members of the Berlin Jewish community who attended the event, by now a Chanukah tradition at the historic Pariser Platz, home of the Brandenburg gate.

Before lighting the menorah, Ms. Grutters said: “Seventy years after the liberation of the Auschwitz concentration camps and 50 years after Germany established diplomatic relations with Israel, Jewish life in Germany has been restored . . . It is very symbolic that here at the Brandenburg gate – which symbolizes Germany’s greatest moments on one hand and its darkest on the other – we celebrate Hanukah together.”

Rabbi Yehuda Teichtal said, “Just a few weeks ago we witnessed the Paris terror attack, which has spread darkness and fear all around us. Tonight, we are here to say that light shall prevail over darkness and tyranny . . . “Am Yisrael Chai.”

U.S ambassador to Germany John B. Emerson, Israeli delegate to Germany Avi Nir, and ambassadors of the U.K., Poland, Italy, Ukraine, Brazil, Denmark and others participated.

Related Articles
View All
Jewish Life in Germany 70 Years After Kristallnacht
(lubavitch.com) Survivors of Kristallnacht will tell you that they remember the flames. Fires shot out of the roofs of synagogues and the smell of burning…
In Once-Judenrein Germany Jewish Life Blossoms
Twenty five years ago, he says, the attitude was that “Jewish life should be kept in the backyard,” and he didn’t see a need for…
Get Inspiration to your inbox!
Newsletter
Join our weekly newsletter for inspiration and updates
Donate
Find Your Local Chabad Center
Chabad
About Chabad-Lubavitch
About Chabad Lubavitch
The Rebbe
Headquarters
Magazine
Magazine
News
News & Updates
In The Media
Impact
Social and Humanitarian
Social and Humanitarian
Education
Education
Community
Community