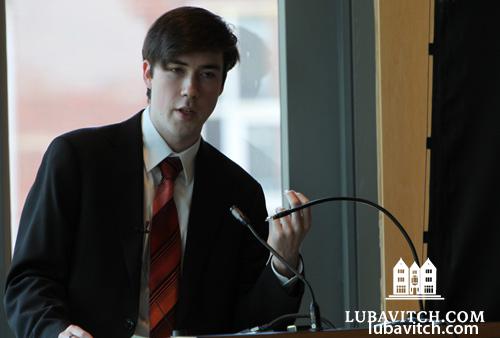 Daniel Slate of Stanford University presents on Sinai and the Principles of Highest Purpose at the symposium.

(lubavitch.com) “In this essay, I examine how my understanding of G-d affects how I should live my life. I ask, ‘what is God, where is God and what does He have to do with me?”

That was University of Colorado senior Shifra Blumenthal’s opener as she addressed a group of peers and a panel of professors at the first Sinai Scholars Society Symposium this past Sunday. Shifra completed a rigorous semester with Sinai Scholars at her campus before being invited to present her paper at the symposium, hosted by Chabad of Princeton on the university campus.

Sinai Scholars Society, a joint program of the Rohr Jewish Learning Institute and Chabad-on-Campus seeks to promote greater engagement in Jewish education for college students. Students are admitted by application process to its intensive, semester-long Jewish study program that offers in-depth levels of Jewish education and follow-up study opportunities like this conference.

“It is quite remarkable,” said Dr. Naftali Loewenthal, a professor at London College in the UK who is on the Sinai Scholars faculty, “to listen to college students challenge western ideas” in favor of exploring an intellectually compelling Jewish, Torah perspective.

More remarkable yet if you consider that it wasn’t all that long ago when a Jewish kid going off to college was another Jew falling off the radar. For while college provides young students with a wealth of new intellectual experiences, the exhilarating mental exploration was never applied to Jewish learning.

Lured by the sophistication of academic life, individual Jewish identity became increasingly irrelevant to their lives, and students’ home-bred attachments to Jewish tradition quickly and surely dissolved like salt in the soup of the proverbial melting pot.

Things looked different at Princeton’s Wallace Hall this Sunday, where 10 Jewish students from participating Sinai Scholars Society universities across the country, brought their intellectual curiosity to the study of Judaism, and submitted their papers on issues of Jewish tradition and its relevance to the post-modern American experience.

“The opportunity for students interested in Judaism and Torah to interact in an academic venue where scholars respond to their ideas about Torah and Judaism,” said academic advisor to the conference, Ariel Simon of NYU, “is refreshing and extremely meaningful for students and their intellectual growth.”
Topics ranged from the theological to the practical, suggesting that a growing number of Jewish American college students are finding personal intellectual and moral relevance in Judaism.

Daniel Slate from Stanford University presented on Sinai and the Principles of Highest Purpose. Katherine Epstein, a graduate student from Dartmouth College shared her research and views on Learning About Modern Sex From Women in the Bible; Rachel Channon from NYU discussed her ideas on The Power of Speech; Jennifer Chevinsky, a major in bioethics and President of Hillel at UConn as well as the college’s pre-med society, discussed End of Life Issues: Are Rabbinic and Biblical Standards Relevant?

Following each paper, presenters benefited from peer review and constructive comments by the participating professors, among them world renowned Dead Sea Scrolls scholar Lawrence Schiffman of NYU, Immanuel Schochet of Humber College and Lewis Glinert of Dartmouth, as well as Naftali Loewenthal, all of who challenged the students to probe deeper.

“The conference was developed to allow students to showcase their research in a setting where they would benefit from a rich interchange of ideas, and be encouraged to take their studies to the next level,” explained Dr. Chana Silberstein, who is on the board of Sinai Scholars and director with her husband of Chabad-Lubavitch at Cornell University.

For college students accustomed to working on research papers only to have them returned graded but with no real discussion, “being invited this way into Jewish discourse is a very rare and exciting opportunity,” she said.

Alan Newman, a philosophy major at Tulane who presented on a rather dense philosophical topic—Stipulative Frameworks for Anlyticity, the Jewish Tradition and Skepticism—which sparked lively debate, concurs. The experience, he said, “made me more aware of a lot of the issues that concern ethics in contemporary life. It gave me the opportunity to think about ideas that I would not have otherwise encountered.”

Princeton University students were especially pleased to see this event hosted at their campus, which historically has not been especially friendly to Jews. Ethan Ludmir, a sophomore at Princeton majoring in molecular biology, and President of the Chabad Student Board at Princeton, told lubavitch.com that he felt that “it is important that a conference where a diversity of ideas about Judaism would be hosted here at Princeton.”

Leon Furchtgott, a physics senior at Princeton also sat in on some of the sessions. He saw the symposium as a bridge between the Jewish and academic worlds and was especially glad to see the rabbis on his campus. “To have a roomful of Chabad scholars here at Princeton speaking to students about intellectual issues relating to Judaism does not happen very often.”

Rabbi Eitan and Gitty Webb, Chabad representatives at Princeton, welcomed the students into their campus Chabad Student Center with a buffet Chinese supper. Lingering over the lively dinner table, the students, stimulated by the intellectual activity, were eager for more. Dr. Lowenthal, author of Communicating the Infinite (Chicago University Press), presented a slide show developed around the thesis of his forthcoming book, Hippy in the Mikveh, which explores the development of inclusiveness as a defining value within the rigorously observant Chabad movement.

Sarianna G. Murphy of the University of Colorado took the first award for her comparative study exploring Jewish and secular law on the Morality and Legality of Torture and the Defense of Necessity. Murphy told the intimate group of students, rabbis and rebbetzins that she comes “from a very, very secular home,” and entered the Sinai Scholars program on a whim.

“I was never attracted to Judaism until I came to college and met Chabad. The Sinai Scholars program gave me an opportunity that has been truly enlightening,” and opened possibilities, she said, for her “to continue exploring her Judaism.”

Visibly buoyed by the experience, students carried on well into the night with an impromptu farbrengen at the Chabad House. Rabbi Menachem Schmidt, Executive Director of Chabad-on-Campus who formally closed the event before the farbrengen called the Conference a “historic first>'

"In five years from now," he predicted, "the numbers at the annual Sinai Scholars conference will have grown tremendously.”

Related Articles
View All
Reaching for the Infinite: Scholars At NYU On the Rebbe
“Menachem Mendel Schneerson is larger than life,” said Elliot Wolfson, a professor at NYU and scholar of Chasidism. “To speak of him is fraught with…
The Lubavitcher Rebbe: A View From the Ivory Tower
Disagreement among the academics who convened earlier this week at a conference on the Lubavitcher Rebbe was evident in healthy abundance, but a thread of…
Jewish Academic Society Now At 44 Universities Nationwide
(lubavitch.com) In 2007, a Jewish academic society quadrupled its affiliated campuses and saw a record number of Jewish students complete its intensive course of study. Chabad…
Jewish Revival Greets Young Jews Moving to the Lower East Side
(lubavitch.com/LNS) Mention of the Lower East Side often evokes images of heaving tenement buildings, anxious immigrants, and pungent pickles. While the pickles remain a landmark…
A Most Unusual Event
Shoppers, fresh from the streets of a city mad with holiday glitter swept into the lobby of the New York Hilton and found themselves in…
Campus
A Place At The Table
Friday Night @Chabad on Campus
Campus
Kugel for Culinary Students?!
New Shluchim to the Culinary Institute of America and Marist College
Campus
Torah Learning for College Students, Redefined
New JewishU program offers high-quality Torah courses
Campus
Jewish Pride on the Field
Chabad at UCF Celebrates Students’ Soccer Victory
Get Inspiration to your inbox!
Newsletter
Join our weekly newsletter for inspiration and updates
Donate
Find Your Local Chabad Center
Subscribe
|
Log In
Chabad
About Chabad-Lubavitch
About Chabad Lubavitch
The Rebbe
Headquarters
Magazine
Magazine
News
News & Updates
In The Media
Impact
Social and Humanitarian
Social and Humanitarian
Education
Education
Community
Community