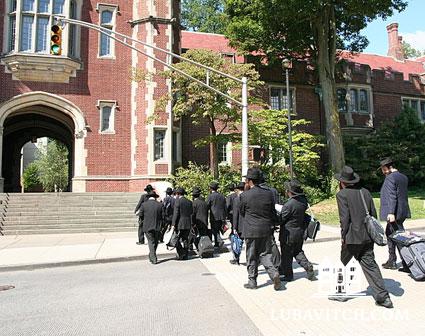 Sinai Scholars leaders arrive at the Princeton campus for the two-day conference. (photo:shturem.net)

“Students blossom in different areas. We would like to structure and offer as many local and national follow up programs so we will have a lot to offer students, wherever their interests lead them – academically or socially, online or in person,” said Rabbi Yitzchok Dubov, director of Sinai Scholars Society.

Opportunities to extend the reach of the society beyond its semester long course work occupied much of the conference attended by society leaders from its 44 affiliated campuses, 13 of which will be debuting society membership at their campuses this year.

Sinai Scholars, sponsored by Chabad-on-Campus, accepts up to twenty students per campus each semester to engage in Jewish study. Over the course of eight 2-hour sessions, students dive into the whys of Judaism.

His Ivy chapter is in good company. Students at Columbia, Yale, Cornell and University of Pennsylvania can join the society at their campuses. Other schools such as UCLA and University of Miami are home to Sinai Scholars Society chapters, too.

“Sinai Scholars has added a degree of professionalism that is very appealing to students. They like the application process, the website, and the content,” said Rabbi Moshe L. Gray, Chabad on Campus representative at Dartmouth College.

Adding to the Society’s academic credentials will be the first Sinai Scholars symposium, to be held at Princeton University in 2009. Students will compete to present papers on Jewish topics at the conference. Winning papers will be published in the society’s new academic journal. All society scholars are required to write a paper at the close of the semester. Many have utilized this paper as an opportunity to investigate issues raised during society meetings in greater depth.

Also introduced at the conference was a 200-page supplementary textbook compiled by society leaders to augment students’ search for source material on course topics. The guide contains texts from the ancient Talmud to decisions rendered by modern Jewish legal experts.  Online interactive video lectures, where questions may be IM’ed during the course of the talk, are being explored as a way to bring the wisdom of expert educators to far-flung campuses.
Not for brainiacs only, new elements of the society’s programming reach all kinds of minds. Specially produced teaser videos that introduce key questions for the next session’s discussion have been enhanced. Panelists discussed hands-on programs they’ve used to bring their sessions to life.

Plans for a winter retreat for socializing and studying with scholars from other campuses, a perk of society membership is also under discussion. Over the past three years, Sinai Scholars have received full scholarships to attend the National Jewish Retreat in the summer. Positive feedback from the students led Sinai Scholars to work on adding a winter retreat to the mix of membership benefits.

Under expansion as well are other lifetime discounts associated with society membership. Course participants who attend classes, a Shabbat experience and write a culminating reflection paper are eligible to receive up to a $500 stipend toward continuing their studies in Israel. In addition they receive priority at the Ivy League Torah Study Experience, Ski and Study and Snorkel and Study courses for women, price reductions on Jewish publications and Jewish Learning Institute Courses.

With fall semester days away, the conference was also a time for Sinai Scholars Society home office to pay tribute to the campus leaders, busy Chabad on Campus representatives all. The society “owes all its success to them. They built their reputation on campus. They joined committees, canvassed professors for input, generated ideas, collaborated and created variations on the program that make it work,” said Rabbi Dubov.

“This year because of them Sinai Scholars will reach new heights.”