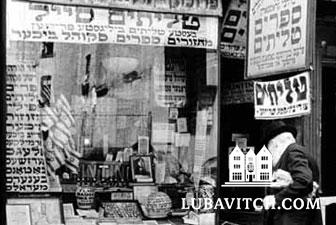 The Lower East Side of yesteryear.

(lubavitch.com/LNS) Mention of the Lower East Side often evokes images of heaving tenement buildings, anxious immigrants, and pungent pickles. While the pickles remain a landmark on Hester Street, the rest of the neighborhood has changed. The immigrants who came did everything they could to leave; today, their great-grandchildren are coming back in droves. Introducing them to a Jewish experience that packs a meaningful alternative to the faded memories of kitsch yiddishkeit portrayed in popular films, are Chabad-Lubavitch representatives.

Historically the Lower East Side included the area from the Manhattan Bridge across town to Broadway and up to 14th Street. From the late 1800s on, the “the tired, poor, and huddled masses” fled poverty and pogrom for the promise of American shores. Their first stop was the Lower East Side where they were greeted by hawking peddlers with overflowing pushcarts and young women who earned paltry wages in garment factories. Though the dialects may have been strange, the welcome sound of Yiddish helped many feel at home.
Still standing on the corner of Green Street and Washington Place is the Brown Building, originally the Asch Building. It was a Shabbos afternoon, March 25, 1911, when 146 Triangle Shirtwaist employees died in one of the worst industrial disasters in New York. Those that didn’t jump to their death, perished in the flames. Most of them were young Jewish girls working without the benefit of laws protecting religious practices in the workplace Americans enjoy

Today, enjoying a vastly changed milieu within the original borders of the Lower East Side, young Jewish students mere yards from this national disaster, celebrate Shabbos with the light and warmth that Rabbi Dov Yonah and Sarah Korn, Chabad Shluchim at NYU’s campus, bring to the experience.

No longer challenged to work on Shabbos like their contemporaries one hundred years ago, students launch into Shabbos preparations Thursday night when they flock to the Chabad House to cook and kibitz with the Korns. Friday night welcomes 200 young adults who enjoy delectable, themed dinners, talk about the parsha, and as many regulars put it, “warmth and relaxation they can’t find elsewhere.”

At its peak in 1910, there were 373,057 people living in the tight confines of the Lower East Side, most of whom were Eastern European Jews. But as people moved up economically, they also moved out. Neighborhood stores and icons became defunct as residents migrated north or to the suburbs. Crowded tenement buildings of yesteryear now house young professionals who can afford the steep two thousand dollar rent on a studio apartment. The Forward Building which once churned out 275,000 copies of the Socialist Yiddish daily was sold to developers. To its right, the Garden Cafeteria once played host to local Jewish poets and intellectuals, including Elie Weisel and I.B. Singer (who loved the house rice pudding). It served its last meal in 1983. The legendary Streit’s Matzo Company of Rivington St. moved to cheaper pastures in New Jersey in late 2007.
On a recent Saturday night, NYU students joined the Korns at The Prime Grill, Manhattan’s swankest kosher steakhouse. As part of their monthly Kosher Dining Club, students visit hip kosher restaurants around the city to see what good kosher dining is all about. During the week, students can reserve individual sessions during “Coffee with the Korns” to discuss personal issues or questions. For those who want extra study in their schedule, various classes run regularly. In conjunction with JLI, the Chabad House offers the well-attended Sinai Scholars program for beginners. Advanced classes, in Tanya and Kabbalah are also available. The lessons came to life this past summer, as the Korns brought 104 students to Israel in the largest NYU birthright trip ever.

Rabbi Korn says that one of the challenges of living and working in this trendy spot is the prohibitive cost. It is also a “wild area” where temptations abound. Despite this, the Korns love the neighborhood because there is always someone grateful to have turned up at Chabad House.

IN THE HEART OF THE LOWER EAST SIDE

A few blocks southeast of NYU, nestled in the heart of the Jewish Lower East Side, is another active Chabad House. While the neighborhood retained a core of religious inhabitants, their average age continued to rise and the young often felt disenfranchised. Rabbi Yisroel and Chanie Stone are changing that perception slowly. They formally moved here in 2005, following nine months of the Rabbi’s “Shabbos commute” from Crown Heights.

The neighborhood no longer “looks like the Boro Park” of 1950s, but there are still some icons remaining. Yonah Schimmel's Knish Bakery on East Houston Street bakes pastries with its founder’s recipe, who sold knishes from his pushcart in 1890. The last holdover from the 80 establishments of the “Pickle District” on Essex Street is Guss’ Pickles who also use the original formula.

But icons alone don’t a community make, and the Stones are motivated to reinvigorate life into this once-vibrant neighborhood. By the Rebbe’s directive and their own determination, they work to reach out to every Jew, no matter their background.
In addition to the diverse crowd living in the Lower East Side proper, an eclectic group from SOHO and the East Village visit their home. Many come for the lively Shabbos minyan at the boutique Blue Moon Hotel. During the Jewish holidays, Rabbi Stone made it his mission to walk every block of the Lower East Side, blowing the shofar, shaking lulavs, and handing out menorahs and mezuzahs. He once brought a chicken to an old lady’s apartment stoop so that she could “shlug kapores,” a traditional pre-Yom Kippur event. A family driving by was so enthralled, they accepted a Shabbat dinner invitation and have been strong supporters ever since.

On his turf, Rabbi Stone is known as “The Friendly Rabbi.” Jews and non-Jews appreciate his pleasant smile and warm greeting in a neighborhood where many feel alienated from established religion.

As more and more young professionals transform the aged neighborhood’s demographics, Chabad representatives are eager to infuse Chasidic warmth where tenements once stood. The descendants of those who left their neighborhood and traditions behind are returning to discover their grandparents’ religion, made relevant and attractive to a modern lifestyle. For many, moving to the Lower East Side spells a providential return to their origins, the closing of a circle.