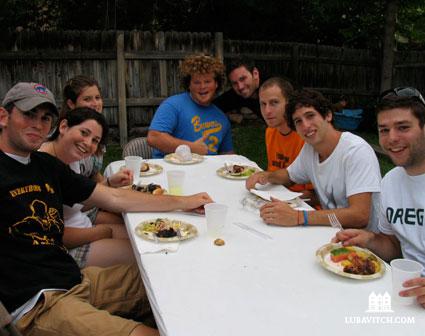 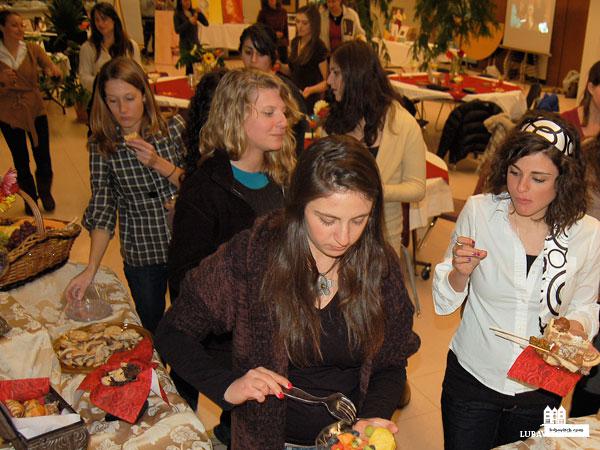 All Photos
Go to Article
At U.S. Campuses, Jewish Students Break The New Year In With Chabad

(lubavitch.com) As millions of college students packed up their IPODS and laptops and headed back to school, Chabad-Lubavitch campus representatives nationwide waited to welcome them.

Students say the college years are a time for personal growth, social action, and great fun. Campus Chabad leaders say they intend to enrich the experience on all counts.

At the University of Colorado in Boulder, some 200 students munched on kosher hotdogs and hamburgers at Chabad's welcome back  picnic. Rick Gaines, the newly-elected president of Chabad’s student board helped organize the event and was very “proud of the turnout.”

Currently active with Jewish events on campus and committed to a Jewish life, this was not always the case for the Chicago native.

It was around this time three years ago that Gaines filled out a student representation form the university mailed to incoming students. When the young freshman came to the section regarding religion, he checked off Buddhist, “to try something new.” His mother, though completely unaffiliated herself, asked him to change his choice to “Jewish.”

The little checkmark sent him on a spiritual course neither could have imagined. Learning he was Jewish, Chabad on Campus sent him a flyer for a Mattisyahu concert that was to take place a few weeks before the semester’s start. There Gaines met Rabbi Yisroel Wilhelm, Chabad’s campus director.

“Before I came here and joined Chabad, my Jewish identity was non-existent,” he says. “I attended services that first year for the first time in my life, and each semester I daven [pray] more.”

Friday night dinners are another favorite of his, and an easy sell when he approaches prospective attendants. “The experience sells itself,” explains Gaines. “A lot of Jewish kids hear that Friday night dinner is fun and free.” Once they try it once, he says, “they keep on coming back.

“Different things talk to different people,” says Leah Wilhelm, co-director in Boulder. “Some come for the atmosphere, others for the learning, and some for the food,” she laughs.

At the Jewish Student Center at Tufts University, Chanie Backman is busy cleaning up from the Jewish Jumbo Welcome BBQ. Students were excited to see the Backmans on their return to campus. Many have kept in touch with the couple via email and Facebook all summer. At the start of this new year, Backman hopes to meet more students and create closer connections.

“It’s a lifetime deal,” explains Backman who is starting her seventh year on campus. “We are still close with many graduates.”

Robyn Lindenberg is unloading her Target furnishings as she settles in for her second year at Tufts. Although she has yet to attend any Chabad events, the sophomore has heard much about them from friends.

“I always hear how welcoming they are,” Lindenberg says, “and how delicious the food is on Friday nights.” This semester, the Houston native confides, “it is definitely on my list of things to do.”

Rabbi Zalman and Dit Greenberg are also emptying boxes. The couple moved to the small Pennsylvania town of Bethlehem to serve as Chabad representatives at Lehigh University. Dit talks about their goals for their center which will include the full offering of classes and holiday events. The guest list of students signing up to join the first Shabbat dinner with Chabad on Campus this Friday night, she says, is already filling up.

Most importantly, she says, “We want people to have fun in a Jewish atmosphere.”

The warm welcome that Chabad on campus is famous for is what excited Gaines three years ago. After only a few bites of chicken soup, he realized there was more to feed his soul. Today the biology major is planning to take his newly-discovered identity to the next level.

After graduation in 2010, Gaines intends to spend a year studying in Israel and volunteering for Israel’s Red Cross, plans that could not have been farther from his mind three years ago when he switched his checkmark and changed his future.