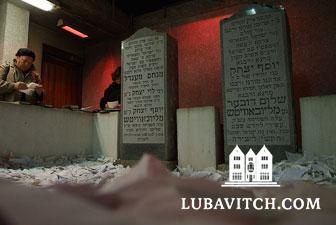 At the Rebbe’s resting places. Shredded notes. (Photo: I. Bardugo for Lubavitch.com)

In the later years of his life, the Lubavitcher Rebbe's visits to the resting place of his predecessor at the Old Montefiore Cemetery in Queens became more frequent. After the passing of his wife in 1988, with whom he lived on President Street in Crown Heights, these twice or thrice weekly excursions to Cambria Heights were almost the only reason he would leave his office at 770 Eastern Parkway.

Accompanying the Rebbe was an oversized brown paper bag filled with hundreds of letters that came to him daily. Many were letters soliciting his advice; most were requests for blessings of one kind or another. Here, at the resting place of Rabbi Joseph I. Schneersohn, the Chabad leader who had passed away in 1950, the Rebbe would pray for the people seeking his blessings.

Apart from that, no one really knows what transpired during the long, private hours the Rebbe dedicated to this practice.

But since his own passing in 1994, the Rebbe’s resting place alongside his predecessor has become a polestar for the prayers of ordinary people, now carrying their own bags, as it were, bursting with the variety of mortal angst.

At 226-20 Francis Lewis Boulevard, in Cambria Heights, Queens, a small, single story cape house on a tree-lined residential street, preparations are in high gear. Over a 24-hour period beginning Monday evening, an estimated 25,000 visitors will arrive here from every part of the world.

The occasion is the 13th anniversary of the passing of the Rebbe, Rabbi Menachem M. Schneerson, of blessed memory.

As in years past, thousands will wait in lines for as long as three hours. Instead of casual chatter that helps pass time on endless queues, this one will be noticeably quiet. An ambient sobriety will set the tone for a two-minute interlude—an attempt, really, at an encounter between the living and the soul of the Rebbe.

Because of the high volume of visitors, “groups will be allowed in for only a few minutes at a time,” explains Rabbi Abba Refson, Chabad representative to the Ohel, as the burial place of the Rebbe and his predecessor is known.

At other times of the year, there usually are no lines. The door at 226-20 Francis Lewis Boulevard opens 24 hours a day to a sparsely furnished room where visitors can situate themselves in a contemplative space before making their way to the backyard—now a huge tent, which leads out to the cemetery grounds and to the Ohel.

People come at all hours for every conceivable reason. Some come to unload, some to give thanks and ask for blessings. For many, the Ohel is a place they come to for solitude and personal reflection.

Mostly Jewish people, but Gentiles come as well. Before entering the Ohel, they may sit down on a bench at one of the long tables in the tent, in undisturbed introspection, and write a note about whatever it is that brings them here. Once inside the Ohel, they will tear their note and drop it in among all the others.

Praying at the burial place of the righteous is a Jewish tradition dating back to Joseph who solicited his mother’s intervention on his behalf, say the sages, when he passed her grave on his way down to Egypt.

The custom presumes a spiritual or religious faith, yet it is not unusual for self-professed non-believers to make their way here.

“There are people who come here saying that they really don’t believe,” says Refson. “But then they come back.”

Of the thousands who come to the Ohel every week, a few high-profile individuals do so anonymously.

Rabbi Refson is wary of drawing media attention to this spiritual haven. “The nature of the experience is very private."

Refson works hard to keep it that way and is generally reticent about what goes on at the Ohel. But he is willing to say this much: “Something happens here that draws people back again and again.”

He is not talking about Chabad Chasidim.

“It is amazing to see,” he says, “how the Rebbe continues to impact thousands of people from the most diverse walks of life, in profound and personal ways.”

Behind a locked closet door in his small office is a fax machine that churns out an average of 700 faxes a day. Every hour or so, Refson unlocks the door, retrieves the faxes, and prints out some of the 400 emails that clog his inbox daily. Without reading them (unless specifically asked to do so), he takes them over to the Ohel, where he tears them and throws them in with the others. It’s a service he provides for those wanting to convey a message at the Rebbe’s resting place, but cannot come themselves.

The gravesites of the righteous are holy places. But the prayers murmured here, the bargains struck and the promises extracted over a simple marker bearing the name of the Lubavitcher Rebbe, bespeak a transcendent bond with this tzaddik, the seventh Rebbe of Chabad-Lubavitch and the last great spiritual leader of the Jewish people.

When the pile of shredded notes grows high, they are burned to make room for more; if you happen to come soon after, you’ll see embers of hand-scribbled petitions fluttering around at the foot of the Rebbe’s headstone.

Under the open sky, in this place called the Ohel—in Hebrew, a tent, —the tranquil air distills a gentle peace and the promise of kindness for the world-weary and the eager, the afflicted and the blessed.