Alone But Not Abandoned: Initiatives Bring Relief to Individuals in Isolation 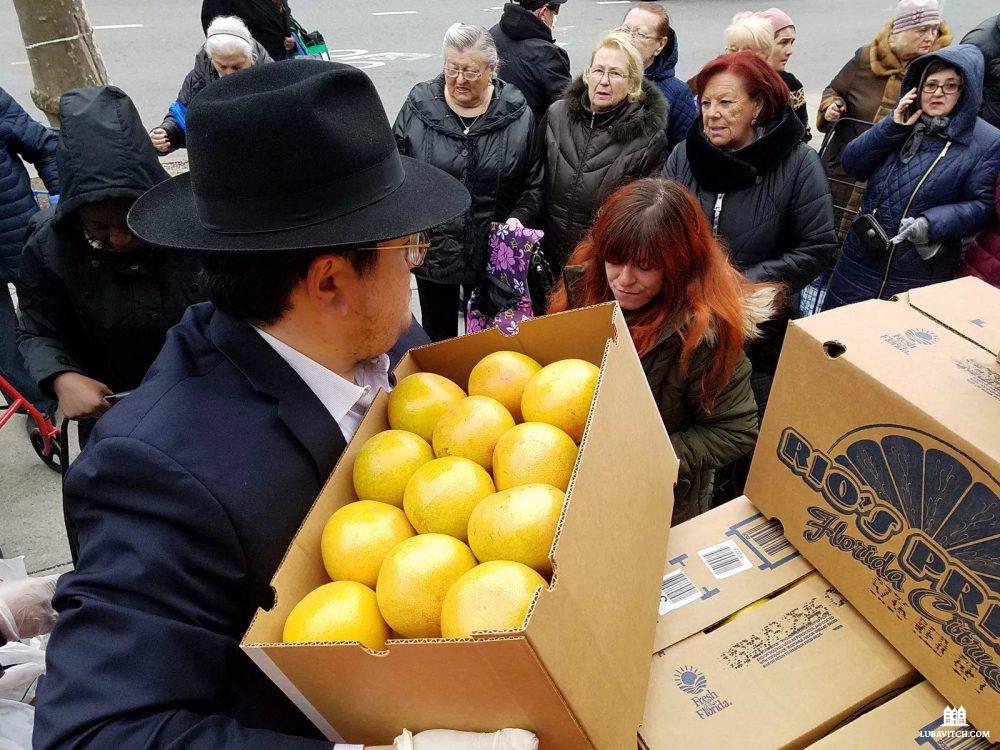 All News
By Liba Rimler

As the corona pandemic forces people homebound, those without support systems are worried. How they will procure basic daily necessities–as well as provisions for the upcoming Passover holiday–under the restraints of quarantine? In response, Chabad shluchim are mobilizing wherever possible.

In Brighton Beach, Brooklyn, Rabbi David Okunov has distributed 2,000 pounds of potatoes in a Key Food parking lot along with a variety of produce and Kosher for Passover items. For seniors who can’t leave their homes, CTeen volunteers are dropping off packages on their doorsteps.

The program, which provides relief to families across the income spectrum, began nine years ago, when Okunov received donations of gefilte fish, which were then distributed to local families. His food distribution program has since expanded.

In the beginning, he says, people were skeptical about the need for such a program in Brooklyn. Now, they’re grateful. “It’s not just about the food we’re giving out. People are feeling connected.”

Rabbi Baruch Epstein, Director of Outreach of Lubavitch Chabad of Illinois, sees this need for connection. Across the state of Illinois, the COVID-19 outbreak means that many people are facing the prospect of having a Seder alone–or not having one at all.

Says Epstein, “There are elderly people who have been spending Passover with their children for the past 30 years, and this year they have nowhere to go. Due to isolation they can’t leave their homes, and they can’t invite anyone. Young people who usually get invitations are also finding themselves on their own.”

“Seder in a Box” was Epstein’s response. Matzah, grape juice, and catered dinners will grace the tables of many of Illinois’s Jewish residents this year. The kits are reaching people throughout Chicago as well as the northern cities, and as far south as Champaign.

Rabbi Sholom Ber Schmerling of Venice, Florida has a unique responsibility in a community largely composed of an elderly population. Volunteers have ‘adopted’ groups of seniors to take care of basic errands and to call and check in on them.

Gestures of assistance are bringing peace of mind to people across the nation. Leona Frankel, of Owing Mills, Maryland, sent an email to Rabbi Nochum Katsenelenbogen.

My husband and I are in our eighties, and we are not leaving our house. Can we get one Seder kit? This will be a life changer, as for over seventy years we have never been alone for the Seder. I was afraid that this year may be the first, but with your “Seder to Go” we will not be alone.

CBI Love, a project by Rabbi Levi Mentz of Forsyth County, Georgia, is an innovative program ensuring that no one is left alone–materially, financially, and emotionally.

Mentz says that CBI Love was developed in Congregation Beth Israel exclusively as a volunteer program to help the sick and those above 60 who are without family members living locally.

“Community is always there to provide,” he says. “Just as it was important two weeks ago, it’s important now.”

At this point, though, they’re not only helping within the Jewish community. The movement has grown to meet diverse needs of the non-Jewish population as well. Therapists, financial advisors, and handymen are stepping up to the plate, offering their services to those who have been laid off and are in need of assistance. Their base connects community members with young volunteers who help them with essentials.

Liza Klahr is a community member who helped spearhead this initiative. “We created a list of people potentially in need and a list of volunteers, in order to partner them up,” she explains.

“Without the commitment of all the volunteers who are part of this program, none of this would have been possible. It is extremely heart-warming to hear the voices of the recipients when they get our calls offering assistance or just checking on them. The same happens when they receive the goods they were or weren’t expecting at the doorsteps. My own dad is 94 years old, currently in Miami, and he is being taken care of by my friends and family so we as a community hope we can do the same for someone else’s parents or grandparents.”

What motivates people to give?

Says Klahr, “When situations like these arise, you realize the importance of having a strong community, and in our case the North Georgia community is not only strong, but also tight, with members that really care about each other.”

As Mentz puts it, “Everyone wants to be a part of the answer. You see people’s true colors during a time of crisis. People are living at their core. At our core, we want to be people who help people.”