A Jewish Response to The Hamans and The Haters 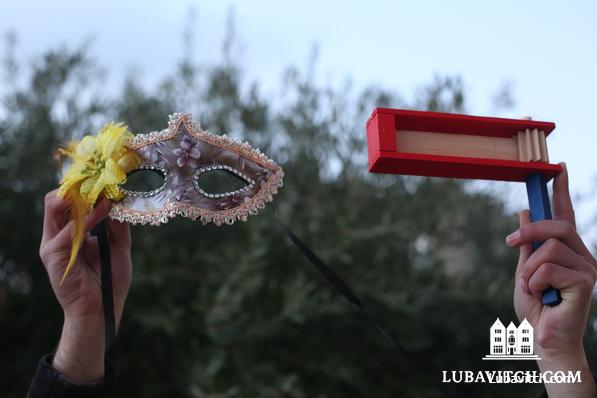 Purim paraphernalia: a mask to hide an identity and a noisemaker to block out Haman’s name

I once knew a Holocaust survivor from Germany who described to me the impact of Kristallnacht on her family. Her father had fought for Germany in World War I and proudly displayed his medals. They had been loyal citizens for generations, and identified themselves more as Germans than as Jews. So they assumed that the growing anti-Semitism was a passing aberration. All that changed on Kristallnacht as they saw the violence of neighbors while friends looked on without intervening.

Today, as anti-Semitism once again headlines American news, I think to myself, this is our “Kristallnacht” moment . . . the day we wake and realize that it is not just one or two virulent haters that we must guard ourselves against—and that our conviction that we have integrated fully into American society is just an illusion. The news reminds us daily that anti-Semitism—even in America—is a crouching tiger poised to pounce at any moment. As Harvey Swados wrote in 1964, describing an interview he had with the Rebbe, “was it his opinion then, that the tragedy [of the Holocaust] was not a unique visitation upon the Jewish people, and that it could happen again? ‘Morgen in der fruh,’ he replied unhesitatingly. ‘Tomorrow morning.’”

Our history is filled with attempts to reduce anti-Semitism by changing our approach to the world outside: be erased by keeping a low profile, or by excelling and contributing double: by integrating and assimilating with the greater society (even to the point of intermarriage) or by keeping to ourselves. Each strategy has sometimes seemed effective in the short-term. But none has consistently worked.

For the Talmud sees anti-Semitism as inextricably intertwined with our identity as a Jewish people. “Why was the mountain on which we received the Torah called Sinai? Because it is the source of the hatred [in Hebrew, sin’ah] of the nations of the world. (Shabbat 89a)”

I write these words days before Purim, and in light of current events, the story takes on new resonance. The Megillah opens with the scene of a 180-long celebratory coronation feast to which all members of the kingdom, including Jews, were invited. The Talmud states: Why was annihilation decreed upon the Jews of that generation? Because they enjoyed the feast of the wicked [King Ahashverosh]. (Megillah, 12a).

The problem is not that Jews attended the coronation party (where, the Megillah tells us—their every need was accommodated: no one was forced to eat non-kosher food against their will). Indeed, one function of exile is to allow us to positively influence and affect every society the world over. But it was also a feast in which, the Midrash says, Ahashverosh displayed the vessels of the temple and dressed in the clothes of the high priest. It was a feast designed to humiliate any Jew who still dreamed of a time when they might serve G-d freely in Jerusalem. It underscored to the Jews that their comfort and wellbeing in the Persian empire would come at the cost of their abandonment of their past.

Could they have taken the politically fraught step of refusing to attend the party? Perhaps. Perhaps not. At times, we must defy the safety of silence and take a stand for what we believe; at other times, it is best to simply wait out tenuous situations.

One function of the exile of the Jewish people is that it has allowed us to influence every corner of the earth. In Kabbalistic terms, with the creation of the world came the shattering of the vessels containing sparks of holiness. Our journeys and travails have allowed us to gather the sparks of holiness that have become entrapped in dark and distant places. But to do this, we must remember always that we are on a mission.

We are blessed, today, to be living in the United States, a land referred to by the Lubavitcher Rebbe as the “province of loving kindness”—a state founded as “one nation, under G-d, with liberty and justice for all.” We have enjoyed unparalleled growth and success as a people, with every opportunity to practice as we believe and to participate in the wider society.

But we are not here simply to enjoy the party, and to take advantage of the bounty and opportunity of this nation. We are in an unredeemed world, and we must remember always that we are still servants. Our choice is to be servants of G-d, proud ambassadors at the party, on a mission to make this country and our world a better place . . .  or we will be reminded that we are no more than servants of the fickle Ahashverosh, the frivolous ruler who at one moment woos us with delicacies and delights and at the next, allows our fate to be decided by the Hamans and the haters.

The Purim story ends on a bittersweet note, for as our sages say, “we are still servants of Achashverosh.” For the moment, the Jews continued to live in the Persian empire and while they could take solace in the fact that Mordechai became a member of the king’s inner cabinet, they must have felt, as we do today, the tenuousness of momentary calm.

But then, as now, we have had the power to turn the tables. For when the servants of Achashverosh become aware that they are still, always, the servant of G-d, then redemption is always possible, and there is ample reason for joy.

Ed. note: Visit lubavitch.com/centers for a Purim celebration near you