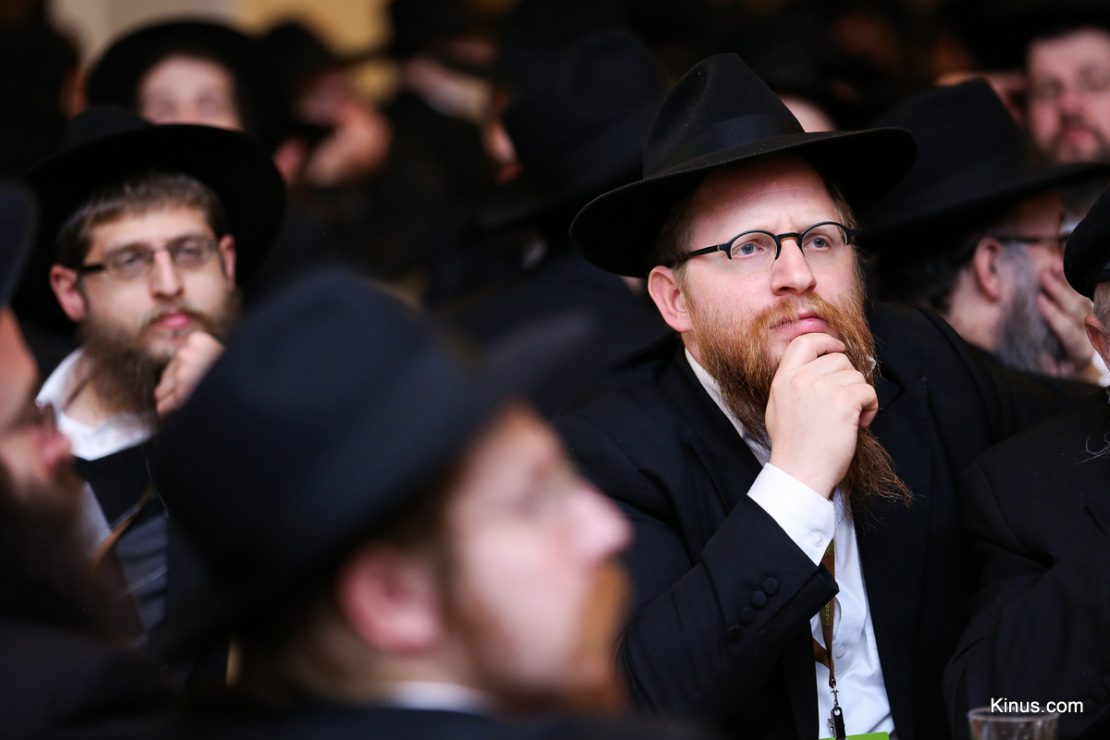 A shliach listens intently at a session of this year’s Kinus Hashluchim,
Photo Credit: Benams Photo

The conversation grew stormy as arguments were advanced, rebutted, and advanced again. The tower of Talmudic books continued to grow, their black and white pages splashed open, one on top of the other, as each of the two yeshivah students sought to prove their point by demonstrating that, “aha, it says right here exactly what I’m saying.” Then, with a scooping thumb motion, one of them concluded his passionate soliloquy and silence fell across the pair. The other student sat quietly as he mulled over his friend’s words.

Finally, he spoke. “I hear you,” he said. And with that, the argument was over.

That phrase “I hear you” is the linguistic equivalent of a homeless orphan with no siblings. It makes sense in English on a very practical level (imagine a children’s book: Timmy plays with the toys. I hear Timmy play with the toys. Good Timmy), but it is, like much of the English that has been contorted, squeezed into the Chasidic Anglophone’s vocabulary, a phrase whose richness can only be fully realised in light of its Yiddish origins and philosophical significance. But the problem here is that the Yiddish forbear of “I hear you” is a made up of words no more than a century old. Yet, derher and derheren (the noun and verb of hearing) are so woven into contemporary Chabad dialogue that it is well worth unspooling the thread and seeing where it all leads back to.

Confusingly, the words herr and herren are the uncontroversial Yiddish terms for hear and hearing. It takes no advanced degree in linguistics to identify the similarities between the two or specialized knowledge of German to know the provenance of that Yiddish. Where things get complicated is the Chabad use of the words derher and derheren. The der prefix renders the words untranslatable (der is ‘the’, so the phrase do you derher? would be the brain-numbing do you the hear?) but catapults derher into a different category than herr.

Perhaps the best way to understand what it means to derher is to understand what it is to herr and then to realize that derher is more than that. Obviously, to herr something (to hear) is not an acknowledgment of audiological success. The yeshivah student was not saying, “The sound waves created by your words have reached my ears.” It is a sad indictment of our modern day infatuation with our phones that it is necessary to clarify that just because words reach our ears does not mean they are being heard, even if we nod at the right places and give perfunctory responses as our thumbs continue to dance over the glowing screen to the music of another conversation. No, to herr means more than to physically hear something.

It actually means four things. Chabad philosophy has a remarkable ability to take any one concept and slice it and dice it to create infinite strata, unending hierarchies and cascading levels. Just when you think that you’ve gotten your mind around an idea and placed it in a mental box, a Chasidic text will come along and say, “Actually, we should probably re-conceptualize it another three ways and create another two sub-categories. Vendt zich vu men redt, we could recast the thing entirely and start the whole exercise again.”

My point is that it is not surprising that there are four ways (or in Chabad parlance, four levels) to understand what it means to herr something.

The first is simple. To hear something is to understand it. The second level of heren is also simple. It is when what you hear affects your heart. Hearing becomes an emotional exercise as much as a mental one. The third and fourth levels are little more recondite. At level three, to hear something ignites the ratzon hanefesh, triggers a person’s desire for something. Finally and fourthly, to herr something means that the koach haoneg has been engaged; one’s “buttons” have been pushed.

A short example is useful here. Imagine you hear that ‘John’s cancer is in remission’. You understand what cancer is, what remission is, and how John’s treatment was successful. That’s the entry-level way of hearing something. Second your heart hears. You are elated by this development. Third, you feel an impulse to raise money for cancer research, to thank the doctors, to ensure everyone has access to good healthcare. Fourthly and finally, the news engulfs you and seizes you and changes you. Something deep down feels right, peaceful, good.

This much is what heren means. One can herr the heren and it will affect him to five degrees. Derheren is when the boundaries between you and what you hear dissolve.

Ever been at a wedding or a concert where the music thumps so loudly that you begin to throb, that it feels as if you are the amplifier and you are vibrating? That’s what it means to derher. As it so often does, life imitates Chasidic thought. There is some controversy now in law enforcement about the use of LRADs, long range acoustic devices. Employed by police to disperse a crowd, these machines emit sounds of such volumes and frequency that those in its path feel compelled to move. Many have tried to resist it, but have described the way their bodies are seized by the sounds and just move of their own accord. That full-body grip that the sound has is a derher. To be the subject of that grip is derheren.

And so derher became synonymous with absolute synthesis with an idea, of total harmony and appreciation of its ideals and messages and demands. You hear it, your arms hear it, your legs hear it, you derher it.

Many have gnashed their teeth and wrung their hands over the creeping automation of our life. Friendly but automated voices at the end of the service hotline listen to our requests and then route us to the right destination. Siri listens to our question and then provides an answer. We ourselves are robots at times, listening to our children, our spouses, our friends, our colleagues, asking them to “press 1” if we heard correctly and then spitting out the correct response.

But do we truly hear what they are saying? Do we derher our daughter’s description of her schoolyard tribulations and triumphs? Has our friend’s account of his financial troubles rocked us to our core, or do we just feel pity and offer solutions? Are we derheren the Torah we study, letting its words run through our veins and circulate through our bodies?

To simply herr is hard enough. Attaching the der can be the work of a lifetime. But for Chabad Chasidim who have brought derher in to vogue, to look at someone in the eye and truly say “I hear you” is something worth the effort.

Related Articles
View All
Wordsmith
Wordsmith: Tamim
The tamim is unflappable. He does not sway with the winds of change, nor bend to meet the expectations of others. He is a simple…
Wordsmith
Wordsmith: Shtus D’kedusha
As is true of every close-knit cultural group that enjoys a history, traditions and habits particular and peculiar to it, conversations among Chabad Chasidim are…
Wordsmith
Wordsmith: Farbrengen
Gather together, men of the brotherhood. Sit together in peace, in harmony, in fraternity. Share your burdens. Cry with your fellow in his pain, laugh…
Wordsmith
Wordsmith: Iskafya
Iskafya is the mind showing the body who his boss. “So, mister,” says the mind. “You want to indulge in that indulgence? Do you? No.…
Get Inspiration to your inbox!
Newsletter
Join our weekly newsletter for inspiration and updates
Donate
Find Your Local Chabad Center
Subscribe
|
Log In
Chabad
About Chabad-Lubavitch
About Chabad Lubavitch
The Rebbe
Headquarters
Magazine
Magazine
News
News & Updates
In The Media
Impact
Social and Humanitarian
Social and Humanitarian
Education
Education
Community
Community