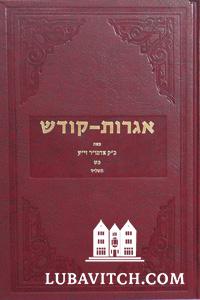 Kehot Publication Society, the Lubavitch Publishing House, announced the publication of the 29th volume of Igrot Kodesh, “Holy Epistles,” by the Lubavitcher Rebbe. This 352-page volume containing some 328 letters from the years 1974-75, written for the most part in Hebrew and brings the total of the Rebbe’s letters published thus far in this series to 11,300.

The Rebbe’s correspondents include statesmen and homemakers, chief rabbis and Bar/Bat Mitzvah youngsters, scientists, communal leaders and laymen. These letters offer insight to the growth of Chabad-Lubavitch as a worldwide organization, and its impact on post Holocaust Jewish life.

The range of topics covered in these letters is broad, including as it does matters of Jewish esoteric interest, Jewish law, Chasidic philosophy, and the Jewish perspective on science and politics. "Many turn to these letters because of the insightful guidance they offer on a human, personal level concerning relationships, personal development and social and communal affairs," says Rabbi Yosef B. Friedman of Kehot.

Of special interest in this volume are the letters dealing relating to the Yom Kippur War and its aftermath, wounded soldiers, orphans and widows, the establishment of the Mitzvah campaigns, Russian Immigrants in Israel, women’s higher Torah education, the founding of Kiryat Chabad in Safed, Israel and the celebration of the Year of Hakhel

The Kehot Publication Society, established in 1942 by the Lubavitcher Rebbe, is the world’s largest publisher of Jewish literature and has brought Torah education to nearly every Jewish community in the world. Millions of volumes have been disseminated to date and have been translated into Russian, Spanish, French, Italian, Portuguese, Dutch, German, Farsi, Arabic, Hebrew and Yiddish.

This volume, as well as the complete catalog of Chabad-Lubavitch publications, is available online at: kehot.com.