Virtual Hugs for the Hospitalized 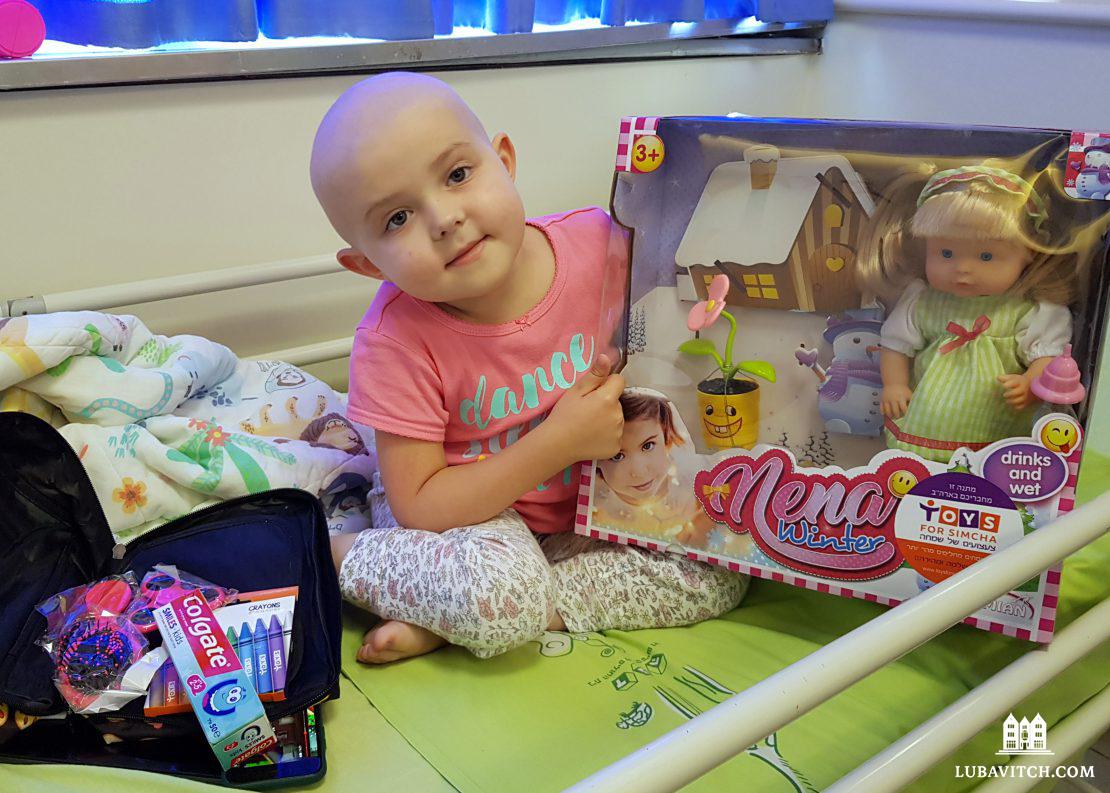 Rachel* clutched the package close to her chest, in her room at Morristown Medical Center. In the hospital for a month as she is treated for a cancer that is in advanced stages, she, like thousands of those in hospitals and long-term-care facilities while COVID rampages, faced the prospect of a lonely Chanukah without a single visitor allowed. Then the package arrived, filled with Chanukah goodies and a hand-painted card with the words “made with love” adorned by dainty coral and blue flowers. “Please tell them I received it with love,” she said tearfully to the Jewish chaplain who was making her rounds delivering the packages. The gifts and cards were created by Mrs. Sara Brafman‘s twelve-, and thirteen-year-old students at Cheder Lubavitch of Morristown in conjunction with Mrs. Chani Goldberg, director of Chabad on Call, Chabad’s network for hospital chaplaincy and outreach.

“Holidays are a difficult time to spend in the hospital, even more so now with COVID visitor restrictions, so we had to get creative to find a way to bring people some Chanukah cheer and let them know they’re not alone,” Chani says.

Chabad on Call shluchim sent out thousands of Chanukah-in-a-Box kits, hundreds of electric menorahs, and delivered tens of large menorahs to be set up in lobbies and entryways. The network created a fifty-minute video montage, featuring Chanukah messages of hope from Jewish public figures like Israeli Ambassador to the USA, Ron Dermer, rapper Nissim Black and former Israeli-American basketball player Tamir Goodman.

There were messages also from those who could identify with the struggle of battling illness during this time. In late 2019 sculptor Gary Rosenthal was on vacation when he received the results that confirmed that he had pancreatic cancer. “People tell me 2020 was a bad year, but let me tell you 2020 was the best year of my life because they got rid of my cancer,” he says in his video message. Before his surgery Gary created glass ‘strength stones’ that he sent to his friends. Every week, at the time of his chemo treatments his friends would hold the strength stones and pray for Gary, and send him messages of love. “Like the menorah that has eight separate lights that are all part of one menorah, the strength of my community, helped me to recover,” he shares.

Approximately one thousand Chabad representatives are collaborating with their local hospitals, assisted living centers, and long-term care facilities to stream the video on the institutions’ internal networks. Some of the Jewish facilities will assign staff volunteers and nurses to light the menorah with residents and sit with them while the video plays. Other shluchim will hold public menorah lightings in the lobby which will be streamed to patients, or residents.

“It’s our way to send them a virtual hug,” Chani says. And some shluchim are including hospital staff and first responders in that hug, sending donuts and thank you notes in gratitude for the sacrifices they have made since COVID hit.

Chabad has been bringing Chanukah joy to hospitals for decades: In 1953, Rabbi JJ Hecht founded Toys for Hospitalized Kids to provide holiday gifts to sick children, and in 2019, the organization launched in Israel as Toys for Simcha (happiness). The organization purchases toys, games, and books, and sends volunteers via local Chabad centers to deliver the gifts in person. They also send gifts to children with chronic illnesses living at home. “It’s much more than the gift, it’s to tell the kids we’re thinking about them, we love them and want them to get better,” says Rabbi JJ Hecht, current president of Toys for Hospitalized Kids, and grandson of the organization’s founder.

As Chanukah approached this year, Rabbi Hecht assumed there would be no way to send volunteers and began contacting hospitals in an attempt to make alternate arrangements. He was surprised when the Israeli hospital networks pushed back, asking for volunteers. “They reached out to ask us to send not just the gifts, but the volunteers, too. They saw what an effect it had on the kids last year, and they said it was even more needed this year.”

So, in the days leading up to Chanukah, five volunteers who had been COVID tested and were dressed in full PPE visited over one thousand kids at hospitals in Jerusalem, Afula, Tel Aviv, and B’nei B’rak. They brought donuts and gifts and received smiles and glee in return. Nurses at Dana Dweck Children’s Hospital in Tel Aviv described the reaction of a young girl who is receiving painful treatments after she was attacked by a pittbull “her smile lit up the ward.”

In the USA, Toys for Hospitalized Kids shipped close to forty thousand gifts to pediatric hospitals and children’s care facilities in thirty states and coordinated with staff for their distribution. Rabbi Hecht received an email in response, with no text in the body of the email, but a subject line that read, “You made my son’s Chanukah, thanks!”

But reaching out to those alone and in the hospital over Chanukah is not just a job for adults, and the more than eleven thousand kids who are part of CKids, the Chabad Kids Network, know this. In 380 Hebrew Schools and children’s clubs around the world, the children spent the weeks before Chanukah creating unique gifts and designing handcrafted cards that they sent to children in their local area hospitals. “I am part of a network who are doing kind acts for others. We too have the power to help others and make the world light like the menorah,” says eight-year-old Aviva Jablon, of Westlake Village, California.

As Gary says, “It’s the miracle of people coming together that makes this world work.”

Related Articles
View All
Hospital
Lubavitch.com Launches New Podcast
Lamplighters: Stories From Chabad Emissaries On The Jewish Frontier is a bimonthly podcast focusing on Chabad emissaries, or shluchim, their personal struggles and the people…
Hospital
A Stranger in the Land
I had never seen thirty-three degrees Fahrenheit on the weather forecast. My English isn’t great, and I felt so alone.
Hospital
A Warm Hug on a Cold, Lonely Street
About five years ago, I was diagnosed with hypertrophic cardiomyopathy (HCM), which causes thickening of the heart muscle.
Hospital
NYU’s Longest COVID Patient Released
“This is the moment I have been praying for from the moment I woke up at NYU this summer,” said Rabbi Yudi Dukes, Thursday, appropriately,…
Get Inspiration to your inbox!
Newsletter
Join our weekly newsletter for inspiration and updates
Donate
Find Your Local Chabad Center
Subscribe
|
Log In
Chabad
About Chabad-Lubavitch
About Chabad Lubavitch
The Rebbe
Headquarters
Magazine
Magazine
News
News & Updates
In The Media
Impact
Social and Humanitarian
Social and Humanitarian
Education
Education
Community
Community