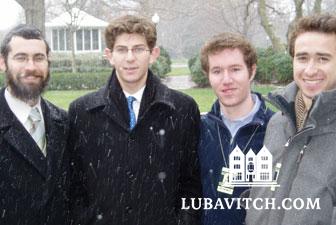 (lubavitch.com/lns) Passions are running high as Pennsylvania’s presidential primary nears. Pundits are squabbling. Campaign lackeys are slinging mud. But at Chabad-Lubavitch House at Penn, Penn Democrats and Republicans set aside their differences to share Shabbat meal.

Sharing Shabbat with fifty University of Pennsylvania students in a politics-free zone recently, provided a much-needed break for Joe Gross, vice president of the Penn Democrats.

“Shabbat dinner gave everyone a nice reminder in the midst of an election season that there was a basic desire to be active and help our country that we share and respect,” Gross told Lubavitch.com.

In an overt effort to get the bipartisan conversation going when the event first began four years ago, Democrat students sat at places marked by blue plates, which alternated with the red plates for the Republicans. This year, blunt mixing instruments were not necessary, according to Brandon Paroly, vice president of the UPenn College Republicans.

“We are used to seeing each other on campus, at political events where we’re on opposite sides. On Shabbat, we talked about politics, but it was friendly,” he said.

Divisions over positions and candidate preferences didn’t fade away, but the sense of obligation to the greater good came to the fore at the dinner. “The kinds of people who choose to get involved in politics are often very compatible even if they disagree on the issues,” said Gross.

“Unity Shabbat” is but one of the many themed Shabbat dinners hosted at Lubavitch House.

“We look for ways to engage new people,” said Rabbi Haskelevich. The Haskelevichs have welcomed Alianza, UPenn’s Latino and Jewish partnership group, for a Mexican Shabbat, and 350 students turned up for the Friday night that brought together students from all of  UPenn’s grad schools. During the week, Lubavitch House classes and gatherings nurture a growing number of UPenn’s 6000 Jewish students.

Joining a unity event has implications beyond the belly-filling feel good meal. When David Copely, who spent a lot of time at Lubavitch House during his UPenn years, landed a policy job at the White House, he invited Lubavitch House student politicos – from both sides of the aisle – on a West Wing tour.

An additional benefit of breaking Challah and enjoying Nechama’s roast chicken together is the opportunity to meet people who care about issues that supersede party affiliation. Alexandra Leavy, president of the Penn Israel Coalition, met Penn Dems and Republicans who eager to be a voice for Israel on campus.

Unity Shabbat at Lubavitch House, she said, “is an opportunity for leadership to get to know each other better and work on issues together.”