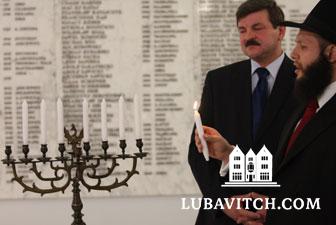 Rabbi S. B. Stambler lights the Menorah in the Sejm, as Deputy Parliament Speaker looks on.

In an event rich with implications for Jewish life in Poland, Chabad-Lubavitch introduced the tradition of Chanukah's menorah lighting to the Polish Parliament this Chanukah.

As first reported last week by Rabbi Sholom Ber Stambler on Lubavitch.com, the menorah lighting would be an exciting one for Poland's Jews who, until recently, kept a very low profile.

"It turned out better than I anticipated," Stambler told Lubavitch.com shortly after the menorah lighting Monday, the seventh night of Chanukah.

"It elicited Jewish pride that has been absent in Poland for decades."

The Sejm's menorah lighting followed one on Sunday, outside the Palace of Culture in Warsaw, also conducted by Rabbi Stambler. Mr. Waldemar Pawlak – Deputy Prime Minister was joined by Mrs. Hanna Gronkiewicz–Waltz–President of Capital City of Warsaw,  Mr. David Peleg – Israeli Ambassador in Poland, and Mr. Szewach Weiss – former Israeli Ambassador in Poland and a friend of Chabad of Poland.

“This really is the message of Chanukah—to transform darkness into light, and nowhere is this better illustrated than by lighting the menorah in places once associated with great darkness,” Rabbi Stambler told Lubavitch.com.