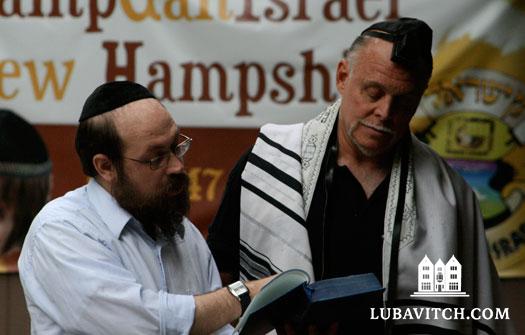 (lubavitch.com) The Fisher Cats fell to the Trenton Thunder by a score of three to one at Wednesday night’s minor league game in Downtown Manchester. But under the circumstances, it was a win-win for all, says Rabbi Levi Krinsky, Director of Chabad of New Hampshire, who supervises the communities' Jewish Pride Night which took place at MerchantsAuto.com stadium.

“There was so much anxiety that the game would be rained out,” says Krinsky, who was asked by local radio WGIR half jokingly if he might seek Divine intervention to bring the rain to a stop.

The relentless downpour did indeed come “to a miraculous screeching halt” half hour to game time, as Rabbi Krinsky prepared to throw out the ceremonial first pitch.

With the skies cleared, the stadium began to fill. Billing the evening "Jewish Pride Night" as a community-wide event drew 1,000 more to the game.

Jewish fans and campers from New Hampshire's many overnight camps including the local Gan Israel summer camp, participated in on field and off field activities and got to munch on glatt kosher hot dogs, fries and even falafel while rooting for their teams, respectively affiliates of the Toronto Blue Jays and the New York Yankees.

Also at the game was Ron Blomberg, a Jewish former NY Yankee slugger and the major league’s first designated hitter.

Author of D.H. for Designated Hebrew, Blomberg took up an offer by Rabbi Krinsky  earlier in the day to wrap tefillin for the first time in his life. Visibly moved by the experience, he told Krinsky, “Over the years, I met hundreds of rabbis and no one ever offered me this opportunity.”

Blomberg signed baseballs and his book in which he writes about being a Jewish baseball player. Back in the 1970s, the Hall of Fame hitter was batting anti-Semitic prejudices while hitting record home runs. That’s a far cry from the scene at Wednesday night’s event, where, for the third year in a row, the stadium accommodated Jewish fans and players with glatt kosher food concessions, a Klezmer band and an audio visual of Jewish life scenes from Israel on the diamond board.

“It was a great opportunity for kids and adults to see how Jewish identity can be integrated into every aspect of life, even sports,” Rabbi Krinsky told Lubavitch.com as he drove home from the game, thunder cracking overhead as the skies opened up and the rains came pouring down with a vengeance.