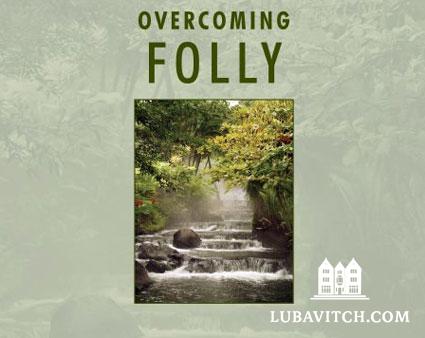 Spiritual seekers are delighted with Overcoming Folly as it is reintroduced in a new and improved format recently published by Kehot Publication Society. Revised to suit the modern reader, this 100-year-old Chasidic text presents the human struggle to overcome materialism–the drive to live a spiritual life.

In this treatise, (Kuntres U’maayan in the original Hebrew) Rabbi Shalom DovBer Schneersohn–fifth Rebbe of the Chabad-Lubavitch movement–examines the concept of “folly,” taken from a Midrashic interpretation of a quote from Joel 4:18. In its most destructive form, folly leads human beings to indulge in material pleasures, detaching them from G-d and ultimately leading to sin.

But the Rebbe provides the remedy to this spiritual malaise: in its best form, “folly” is actually holy. It is a supra-rational form of Divine service that transcends reason and leads to greater connection to G-d and elevated spirituality.

Written in the early years of the twentieth century, Overcoming Folly was translated in 1969 by Chasidic translator and author, Rabbi Zalman I. Posner. In this new version, published as part of the acclaimed Chasidic Heritage Series and annotated by Kehot editor, Rabbi Avraham D. Vaisfiche, a page of English text faces each page of vocalized Hebrew text, and is copiously annotated with source references and clarifications of concepts mentioned in the treatise. The publisher has also corrected textual errors by going back to the author’s original manuscript.

The work draws upon Biblical and Talmudic texts, Kabbalistic and Chasidic doctrine and is peppered with candid insights into human frailties. The message: Every single person has the strength, the “wellspring," to quell folly, overcome natural impulses, and live a spiritual life.

According to Rabbi Yosef B. Friedman of Kehot, "Kuntres Umaayan is one of the foremost ethical/philosophical works of Chabad literature, and is as relevant to the modern student of today as it was to the Chasidic student at the turn of the 20th century. We are delighted to be able to release it under the Chasidic Heritage Series umbrella."

The book is available online, at: www.kehot.com

About the Author: Rabbi Shalom DovBer Schneersohn (1860-1920) was the fifth leader of the Chabad-Lubavitch Chasidic movement. He authored dozens of profound works on Chasidism and Kabbalah, and established the Lubavitch yeshiva (seminary) system, Tomchei Temimim, which was the beginning of the worldwide Chabad-Lubavitch educational system of today. A well-known aphorism of Rabbi Shalom DovBer is “Better one good deed than a thousand sighs.”

Related Articles
View All
Books
Hippy In the Mikvah
“The Rebbe encouraged me to continue with the doctorate. I blurted out, ‘But what about the heresy?’ The Rebbe answered: ‘You should write all the…
Books
Book Review: Teaching The Teachers
I spoke to an Israeli kindergarten teacher this summer who explained to me how the philosophy of early childhood education has changed. “Today,” she said,…
Books
Book Review: My Story
My Story: Forty-one individuals share their personal encounters with the Rebbe, Published by Jewish Educational Media
Books
Keeping That Daily Appointment with G-d
What these books will do is give you the roadmap to find your own “Mezherich” so that you too can learn how to daven.
Get Inspiration to your inbox!
Newsletter
Join our weekly newsletter for inspiration and updates
Donate
Find Your Local Chabad Center
Subscribe
|
Log In
Chabad
About Chabad-Lubavitch
About Chabad Lubavitch
The Rebbe
Headquarters
Magazine
Magazine
News
News & Updates
In The Media
Impact
Social and Humanitarian
Social and Humanitarian
Education
Education
Community
Community