They Biked Across America for Friendship 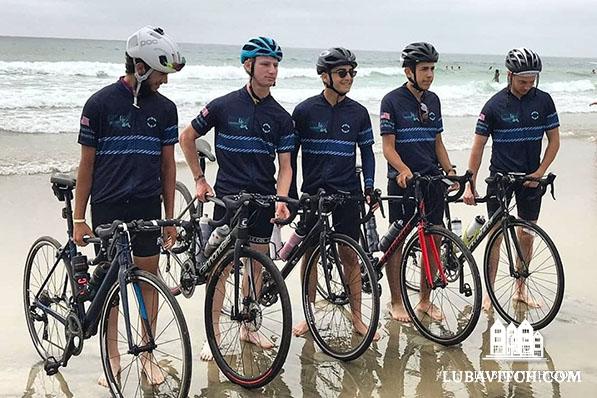 Chaim Weiss is about to enter his junior year of high school at a yeshivah in Far Rockaway, New York, with a summer experience under his belt that will rival that of most of his classmates. The sixteen-year-old was the youngest of a team of four cyclists who completed a six week, 3,100 mile ride across the breadth of the USA last Sunday raising $33,000. A fifth had to drop out along the way due to injury.

The team undertook this cross-country challenge, dubbed Bike for Friendship, to raise money for Friendship Circle International, an organization whose stated mission is to “bring friendship to children and adults with special needs.” The Friendship Circle was started in 1994 as a small program in Detroit, Michigan. Since then it has become an international organization with eighty-one centers on five continents. The Friendship Circle model pairs children or adults with special needs with a volunteer teen friend. They spend time together and participate in a variety of programs.

Friendship Circle of Michigan operates the Ferber Kaufman LifeTown, a 20,000 square foot center that has as its centerpiece a true-to-life cityscape, complete with streets and stores, where children with special needs develop independent living skills. A new LifeTown is set to open in Livingston, New Jersey today.

The cyclists dipped their tires in the Pacific Ocean, as is traditional for coast-to-coast riders, on July 14, then set off from the start line close to Chabad of Poway in San Diego, California, the site of April’s deadly attack. Dr. Howard Kaye, whose wife Lori was killed in the attack, cut the ribbon. “Lori was one of the biggest activists when it came to the Friendship Circle,” Chabad’s Rabbi Yisroel Goldstein said. “Her life was kindness and that’s what Friendship Circle is all about.”

Sender Dyce grew up in Sydney, Australia and came to the States to participate in the ride. Lori’s legacy, he said, was an inspiration as he began the journey. “Now we’re missing one person from the Friendship Circle family. I feel I have to do my part to fill her spot.”

The trip is grueling with approximately six hours of riding each day in the rain or heat, up mountains and across plains. For some riders, it’s the adventure that calls them, for others it’s the cause.

Moshe Cattan of Boca Raton, Florida has a brother with autism two years his junior. At age five, his brother was non-verbal, but now he is high-functioning and attending university. “Friendship Circle was a place for him to be himself,” Moshe says. “He had friends and it felt like one big family.” Moshe volunteered at the Friendship Circle as a teen and joined the bike ride as “my way of giving back to them.”

Friendship Circle International provided all the logistical support the team needed as well as cooked meals along the way.

Shimi Davis was wondering how he would spend the six weeks between graduating law school and beginning a clerkship in Ocean County, New Jersey. “I saw an ad for a logistics director and cook for a cross-country bike ride and thought that was awesome,” he said. Shimi had never heard of the Friendship Circle, but as the group traveled through the cities and towns of America and explained their mission to curious passersby, he realized that Friendship Circle “is this incredible organization that gives the gift of friendship to everybody.”

Like Shimi, Sender, too, enjoyed meeting people along the way. “Everyone we met was so supportive. They loved that we were doing this for charity and it feels great to be a part of something this big,” he said.

“Friendship is not a luxury,” is Friendship Circle’s motto, and Rabbi Mendel says he is so grateful for the “amazing friendship” of all the Chabad emissaries along the way “who went out of their way to host the team at their Chabad Houses.”

The group spent the last Shabbat of their trip in New Jersey. They were joined by Bike for Friendship alumni and toured the new LifeTown facility together. On Sunday, they rode the final stretch and crossed the finish line outside Chabad of Coney Island before going to do the traditional tire dipping in the Atlantic Ocean, a couple blocks away.

“These guys have challenged themselves,” Rabbi Mendel said as he awarded each rider with a special Bike for Friendship medal. “The message here is that through friendship a person can do more than they could do on their own. At the Friendship Circle we see this every day; with friendship, both our kids and our volunteers are able to accomplish more than they could on their own.”

He shared a story of a teenager with special needs who, though she was high-functioning, never thought she would be able to move out of her parents’ home and live on her own. Her friend convinced her to join the Friendship Circle as a Teen Leader. Her friends there encouraged her to apply to college. She wrote her application essay on the difference friendship had made in her life and was accepted. “If we focus on providing friendship for people, we can completely change their lives and ours,” the rabbi concluded.

Related Articles
View All
LifeTown: Reimagining Society, Redefining Inclusion
Set on five sprawling acres and surrounded by New Jersey’s hills and parks, LifeTown offers children and adults with special needs the opportunity to work,…
Hikers go the Extra Mile for Kids with Special Needs
Upwards of five million people visit the Grand Canyon each year, but at least one group came for more than just the scenery. Earlier this…
Shabbat of Inclusion to be Celebrated on Six Continents
This weekend hundreds of communities around the world will celebrate a global Shabbat of disability-inclusion and mental-health awareness. Dubbed ‘ShabbaTTogether,’ it is set for the…
Get Inspiration to your inbox!
Newsletter
Join our weekly newsletter for inspiration and updates
Donate
Find Your Local Chabad Center
Subscribe
|
Log In
Chabad
About Chabad-Lubavitch
About Chabad Lubavitch
The Rebbe
Headquarters
Magazine
Magazine
News
News & Updates
In The Media
Impact
Social and Humanitarian
Social and Humanitarian
Education
Education
Community
Community