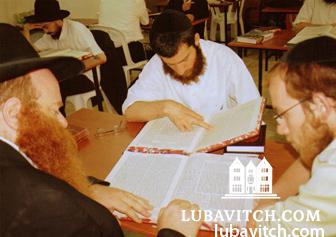 Chabad Rabbi and Dayan, Emmanuel Chaviv, is the dean and director of Lubavitch Kollel for rabbinical and judicial studies in Beitar, Israel.

In supporting their unanimous position, the five-justice panel of Eliezer Rivlin, Miriam Naor, Edna Arbel, Elyakim Rubinstein and Esther Hayut said they view childcare expenses as a necessary expenditure that enables parents to work and earn an income, calling it “a necessary result of natural parental responsibility for their children."

For Rubinstein, his decision was helped by Rabbi Menachem Mendel Schneerson’s writings on the laws and practice of charity in a book entitled Mitzvat HaTzedaka (The Mitzvah of Charity), later published in a second edition named Shaarei Tzedaka.

“It’s well known the obligation of charitable giving in Jewish law, as well as its unparalleled power and significance,” wrote Rubinstein in his decision, listing Mitzvat HaTzedaka as his source. “As far as amounts, the Code of Jewish Law instructs one who is well off to give the poor a fifth of his earnings, or a tenth for one of average earnings. This is known as Ma’aser Kesafim – tithing one’s earnings.”

Explaining the answer, Rubinstein’s primary source was a Chabad publication, Sichat HaShavua, which highlights Rabbi Schneerson’s teachings. “The law states that someone who needs to hire a caregiver for their children so that they can go out to work can deduct the wages from their earnings when calculating their charitable obligations. We have here a precedent from Torah law that necessary expenses, including caregivers, are not included when totaling one’s earnings. The connection is clear.”

Quoting Torah sources in court proceedings is part of the unique relationship shared by the Israeli legal system and the Jewish Torah-based legal system.

Chabad Rabbi and Dayan, Emmanuel Chaviv, is the dean and director of Lubavitch Kollel for rabbinical and judicial studies in Beitar, Israel. He is also a former member of the Department for Hebrew Legal Research, which codifies Israel’s laws and presents Torah law and the Jewish legal perspective to judges and lawyers.

“When Israel was established in 1948, they passed the Law and Administration Ordinance which preserved many of the prevailing laws at the time, including Ottoman, British and Jewish religious law,” Chaviv told Lubavitch.com. “But family relations laws like marriage and divorce, and any situation not yet covered by secular law, are decided only according to Jewish law and the Torah.”

Rabbi Chaviv said that he used to constantly field questions about current cases, “The judges are very respectful of the Torah and interested in hearing what it has to say about the situations they are considering.” Cases lacking secular law, he said, fell to the department to present the law according to the Torah.

According to Chaviv, many of Israel’s judges have regular study sessions in Jewish law. Furthermore, shared Rabbi Chaviv who used to pray in the same synagogue in Jerusalem’s Katamon neighborhood with Justice Rubinstein, judges in Israel are officially supposed to be able to learn Talmud.

“I always found it fascinating that for centuries, Jews have been having scholarly legal debate about issues which the legal systems of the world are either just beginning to grapple with or still struggling to handle.”

The legal battle over tax exemption for childcare expenses began when Tel Aviv lawyer Vered Pery tried to deduct payments to her son’s daycare center. The assessing officer rejected the deduction and Pery appealed to the District Court. The Supreme Court decision accepted the District Court's stance that without supervision, Pery couldn’t earn any income. Thus, childcare is an expense required in order to earn income.

Many welcomed the judgment, citing the tax exemption as encouragement and support for single mothers trying to make ends meet.

For Geulah, a single mother of two in Beitar, the ruling is good start. “It’s hard to really understand what a single parent goes through trying to raise kids and cover all the bills on their own. You need all the help and support you can get.”

A year and a half ago, Geulah was working for a hi-tech company, losing money by leaving early each day in order to meet her kids, ages 8 and 10, after school. When they got sick, she said, thing became difficult. “Sometimes I found a neighbor to watch them and a few times I brought them to work. There were times I had to leave them at home, sick, by themselves. I had to go to work.”

Out of work, she said she receives child allowance from the government and is loaded with loans. Her ex-husband moved back to the states and “is completely out of the picture.”

“I am happy to hear that things are slowly changing, but there is a long way to go. Mothers like me are alone, carrying a heavy burden by themselves.”