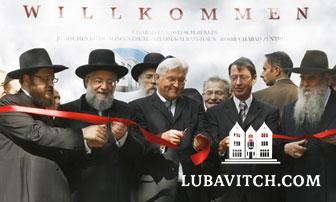 The image of the Chabad Centre opening in Berlin, as it appears in The Economist.

(Lubavitch.com/LNS) A current feature story in The Economist examines the impact of Jewish immigrants from the former Soviet Union on Jewish life in Germany.
The story focuses on Berlin and is topped by a photo of the highly profiled opening of the Chabad Center there last summer.
From the article: “’Today I am happy in Berlin, which has the only Jewish community that feels somehow real,” says Ms Gaydukova on a rainy winter afternoon at the recently opened centre of the Chabad Lubavitch, a branch of Hasidic Judaism, in the western part of Berlin.’
“The Lubavitcher community centre attracts many Jews from the former Soviet Union who, like Ms Gaydukova, are keen to learn more about Judaism."
Lubavitch.com recently reported on a similar trend in Nuremberg, which has about 100,000 Russian Jewish immigrants, and a Chabad Center that reaches out to them with opportunities for Jewish education and Jewish community participation.