“Tell Them It’s Never Too Late” 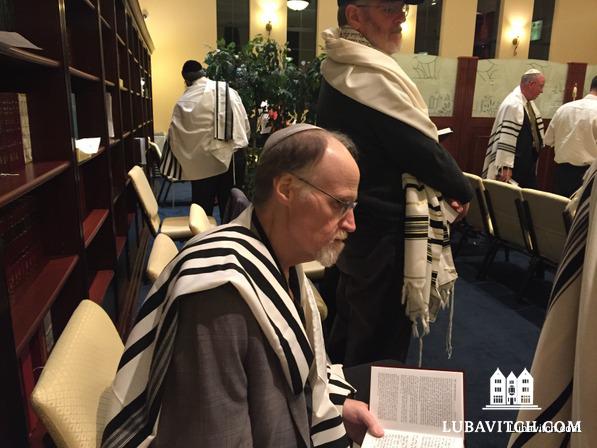 David O’Malley after the Neilah service, as Yom Kippur ended.

All News
By Baila Olidort , Alaska

The rabbinical students hesitated before knocking. The name on the doorbell read David O’Malley-Keyes.

Not a very Jewish sounding name. But you never know.

As they waited, they overheard a man’s voice inside: “Look, we’ve got guys in yarmulkes here!”

A woman came to the door. They spoke for a while. Julia O’Malley told them that her mother was Jewish. Her brother David, the tall fellow resting in the living room, was terminally ill. Perhaps this wasn’t a good time. They exchanged contact information. The rabbis were about to leave when the ailing man struck up a conversation with them. One of the rabbis asked him if he knows what tefillin are.

Did he have a bar-mitzvah?

David Austin O’Malley-Keyes asked the rabbis to please come in.

As they began to bind the tefillin with him, his complexion changed. David had only recently learned that his maternal grandmother was Jewish, a fact that helped explain why he never felt quite right thinking he was Christian. He read the Shema for the first time, now emotionally overwhelmed. The rabbinical students wished him “Mazel Tov!” David’s sister snapped a few photos.

“You just told me,” his sister said to him incredulously, “that you said you wished you had something that you could take with you to the ‘other side’!”

David took some time to regain his composure.

“I did,” he said, tears spilling from his eyes.

“Please believe me,” he told the young men, “that for this alone it was worth it for you to come from New York.”

Before the rabbinical students were due to return to New York, Wasilla’s Chabad representative invited the community to join the young rabbis at Chabad’s Shabbat dinner. A very weakened David made the effort to come with his sister Julia.

David spoke briefly at the Shabbat table. When he learned that there was no treatment for his illness, he said, he was seized by an urgent desire for something enduring, something spiritual.

His voice broke. “And then there’s a knock on the door and these two wonderful rabbis from New York came to celebrate my bar mitzvah with me. I felt that they were G-d sent.”

David’s spiritual thirst grew. He was now binding tefillin every day, sometimes reluctant to unwrap them.

With his health deteriorating, Rabbi Greenberg felt he owed it to David to open the conversation about the Jewish way in death and burial. He was interested, hungry to make up for lost time and learn as much as possible.

David traveled to Tacoma, Washington, to be with his daughter. The high holidays were coming up. Rabbi Greenberg put him in touch with the city’s Chabad rabbi, Zalman Heber.

Rabbi Heber was taken with David’s “dignity and sharp intelligence.” He was, said Heber, deeply thoughtful and filled with gratitude for what had transpired in the last weeks of his life.

In shul on Rosh Hashana, David held the Torah as the shofar was sounded. He talked about what it meant to him to have forged a personal bond with G-d.

On Sunday, October 20, Rabbi Heber visited David. By now he had grown much weaker.

Did he have any thoughts about what he wanted said at his funeral?

“Tell them,” said David, “that it’s never too late to embrace your Judaism and live as a proud Jew.”

He said the Shema. Rabbi Heber helped him bind the tefillin one last time.

The following day, Monday, October 21, David, 64, took his last breath. His family had planned for his cremation but instead respected David’s last wishes. At his funeral, his brother recited the kaddish with Rabbi Heber’s help.

A world traveler, a long-time talk radio host, a man of great wit, remarkable knowledge and musical talent, in the last weeks of his life David found what had eluded him for so long. Thanks to the guys in the yarmulkes, David Austin O’Malley Keyes finally lived as a Jew, died as a Jew and was buried as a Jew. May his memory be for a blessing.

Related Articles
View All
Tefillin: The Pulse of Israel
As head of the Mossad, Israel’s national intelligence agency, Yossi Cohen’s routine is anything but humdrum. Beginning his day at the crack of dawn, the…
Three New Centers in Washington State
Under the direction of Rabbi Sholom Ber Levitin, Chabad representative to the state of Washington, Chabad activities in this northern state are on the rise…
Get Inspiration to your inbox!
Newsletter
Join our weekly newsletter for inspiration and updates
Donate
Find Your Local Chabad Center
Subscribe
|
Log In
Chabad
About Chabad-Lubavitch
About Chabad Lubavitch
The Rebbe
Headquarters
Magazine
Magazine
News
News & Updates
In The Media
Impact
Social and Humanitarian
Social and Humanitarian
Education
Education
Community
Community