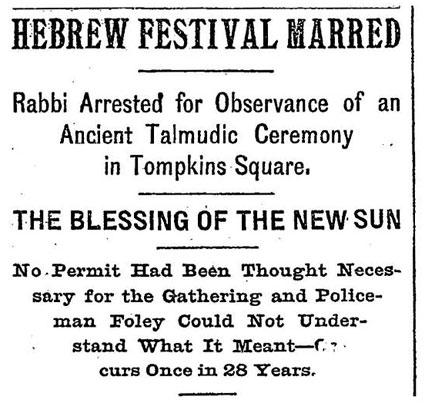 Back in 1897, when two Lower East Side rabbis tried to bless the “new sun”—a once-in-28-years Jewish ritual event—they got in trouble with the law. According to a report in the New York Times dated April 8, 1897, a local police officer became alarmed by a crowd of “Hebrews” that had converged on Tompkins Square at 8 a.m. without a permit. The rabbis, transplants from Europe, were unsuccessful in their attempts to explain this obscure tradition in broken English to an Irish police officer, leaving him more suspicious than curious.

One rabbi fled in fear, the other was arraigned but then dismissed. Fast forward 112 years later, we’ll greet another solar cycle this April 2009. Now well illuminated by English language literature and extensive media coverage, this solar event should leave few in the dark on the morning of April 8, when Jews convene everywhere, permits in hand, to bless the “new sun.”

click here to view a pdf file of the article as it appeared in the New York Times.

Related Articles
View All
Birkat HaChamah, The Blessing of the Sun, 2009
Here’s a short quiz. Read the following quote and then answer the simple question below. “This country, with God’s help, can be self-sufficient in energy.…
Once in a Rare Sun: Birkat Hachamah
(lubavitch.com) The waxing and waning of the moon is regularly celebrated in Jewish life. The Jewish calendar is based on the lunar cycle, familiar to…
News Briefs
Walnut Creek Welcomes New Shluchim
Community Welcomes Shluchim With Flowers And Gifts
News Briefs
Statement By Chabad Lubavitch World Headquarters
Every day that Jews are barred from entering the synagogue by armed guards is an unforgivable violation of the Jewish people!
News Briefs
IL Governor Rauner Joins Chabad Emissaries in Prayer at Western Wall
Illinois Governor Bruce Rauner was joined by Rabbi Avraham Kagan of Lubavitch Chabad of Illinois on a visit to the Western Wall in Jerusalem Tuesday…
News Briefs
Kathmandu Emissary Organizes Rescue on Yom Kippur
It was the night of Yom Kippur, and Rabbi Chezky Lifshitz was not in shul.
Get Inspiration to your inbox!
Newsletter
Join our weekly newsletter for inspiration and updates
Donate
Find Your Local Chabad Center
Subscribe
|
Log In
Chabad
About Chabad-Lubavitch
About Chabad Lubavitch
The Rebbe
Headquarters
Magazine
Magazine
News
News & Updates
In The Media
Impact
Social and Humanitarian
Social and Humanitarian
Education
Education
Community
Community