Soldiers and Civilians With Chabad in Hebron 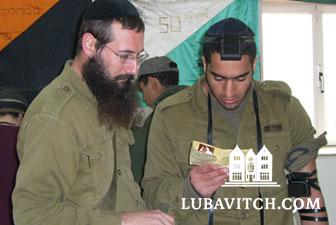 Friday afternoons, when the sun dips beneath the horizon, hundreds, sometimes thousands, of visitors make their way to the Cave of Machpelah.

One weekend a year–when the annual Torah reading in Genesis recounts the narrative of Abraham's purchase of the plot of land in Hebron, as many as 25,000 will come from abroad and all over Israel.
Flanked on one side by the tomb of Jacob and Leah, on the other by Abraham and Sarah, the Shabbat services in Me'arat HaMachpela are exquisite, the dancing and singing, euphoric.
Hebron, say the mystics, is the conduit through which the prayers of Jewish people, wherever they may be, are carried up to heaven.

Danny Cohen, Chabad-Lubavitch representative to Hebron with his wife Bat-Sheva, insists that if you want to experience Hebron, you must come for Shabbat.
“It’s really the only way to learn this city, and to get a feel for what goes on here, instead of what you imagine goes on here,” he says, alluding to the negative press that has tarred its Jewish citizens as fanatic rabble rousers.
Sitting some 20 miles south of Jerusalem, Jewish history is everywhere in evidence on this parched, rocky swath 3,000 feet above sea level, or at least in the scant three percent of it that Jews are permitted to live.
With the rest of the area made up of Arab villages and towns, Hebron is today a breeding ground for terrorist activity, keeping the IDF, which has an army base just a stone’s throw from the Cohen’s apartment, occupied round the clock.
“We’re here because the soldiers are here,” explains Danny, himself a former IDF combat soldier, who understands the soldiers and their thankless mission quite well.
“A big part of their job is weeding out terrorists and preventing terror attacks planned here for Jerusalem and Tel Aviv, and of course, protecting the Jews here—the residents and the  250,000 tourists who visit annually. So we’re doing whatever we can to make life a little more pleasant for the soldiers, and help them mine this city for all its spiritual riches.”
Quite a challenge given the transience of the IDF units that rotate every few months.
But the Cohens, recruited by Chabad’s senior representative to Kiryat Arba, Rabbi Victor Attiya, are all vim and vigor. They throw a huge welcome and farewell party for each respective incoming and outgoing unit, and pack inspiration, education and a love for Jewish life into the four months they get with the soldiers, enough for a lifelong impact.
While most of the soldiers are Israeli born, a surprisingly high number of them come from completely secular homes and experience Shabbat, candle lighting, and even wrapping tefillin, for the first time, here in Hebron.
“Hebron is unique to all the other historic cities in Israel,” explains Danny, “because it really hasn’t changed in appearance over time. Everyone’s very conscious of the holiness of this place, and it seems to make the soldiers very receptive to yiddishkeit.”
With 1,500 soldiers, policemen, and security personnel at any given time in the vicinity, Danny and Bat Sheva identify and utilize every opportunity to reach out. At the army base, the female soldiers look forward to Bat-Sheva’s regular visits, her gifts of homemade food, and the thought-provoking weekly Torah class she leads.
Friday nights bring the soldiers by the dozens to the Cohen family home, where Bat Sheva serves up a feast on long tables set up on her porch. The soldiers, on a first name basis with the Cohens’ five little boys, sit around the table and join in Danny’s Shabbat melodies. Always, he points out the privilege that he and they share as they celebrate Shabbat under the star-studded sky, overlooking the dome of the famous 500 year-old Avraham Avinu synagogue.
The Cohens, even their children, are as hardy as they are sensitive. Not for the faint-of-heart, life in this city, where Jewish residents are relentlessly scrutinized by the media and squeezed by a laundry list of restrictions that make it impossible for them to build or develop the area.
But Danny and Bat Sheva are passionate about Hebron. “We feel an attraction to this city because of Chabad’s deep roots here,” says Bat Sheva.

Chabad has a long history in Hebron, but was forced by the British, along with the rest of Hebron’s Jews, to leave the city following the infamous 1929 Hebron massacre in which 67 Jews were killed in their homes.
In 1967 the city was restored to Jewish hands, but by then, most of the buildings were either appropriated by Arabs, or in disrepair.
Once a week, on Shabbat, and only with an armed IDF escort, Jews are allowed a tour of the Arab Kasbah. Our guide, Shmuel Muchnik, an artist and Hebron history buff, points out the many buildings owned by Chabad and now occupied by Arab squatters: This was once a Chabad girls’ school; here’s the building that was Colel Chabad, where funds for all community services were disbursed; here is the home of Menucha Rochel Slonim, daughter of the second Chabad-Lubavitch Rebbe, Rabbi DovBer, who came from Russia to Hebron in 1845.
A legendary woman said to have spiritual powers, Menucha Rochel was sought out for blessings and guidance by both Arabs and Jews. Her grave is now visited by thousands who come to Hebron.
Danny has made it his personal goal to restore Chabad properties and revive the Chasidic spirit that once permeated Hebron. Recently, he worked with an artist to rebuild a small abandoned synagogue that sits right atop Menucha Rochel’s grave, at Hebron’s highest point, a strategic IDF lookout.
Yeshiva students study in the newly rebuilt shul; soldiers stop in for a drink, the chance to fulfill the mitzvah of tefillin, or sit in on a Torah class on a break from their posts under the scorching sun.
The voices of prayer and Torah study echoing from this high ground are to Danny and Bat Sheva an affirmation of Jewish history, past and present, and the promise of the future, all dramatically tied into one.
“Our roots are in Hebron,” says Bat Sheva. “Some may think we’re crazy for choosing this city as our life-calling and for raising our family here, but we feel blessed by the privilege to live in a place where the history and the holiness of the Jewish people are felt with every step you take.”