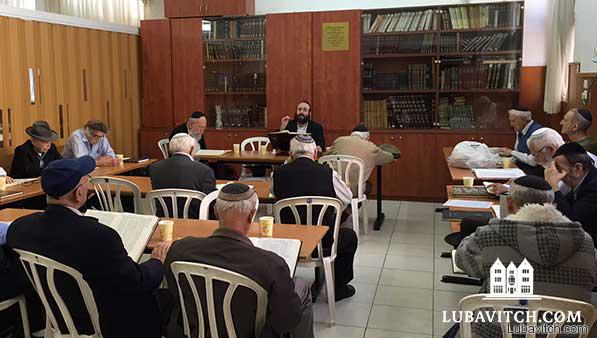 Seniors attend a Talmud class at Chabad of Tel Aviv.

“In truth I am too frail and would not come to study daily, but I feel that I owe a debt to the person whose heart is transplanted in my body,” Israel, a Tel Avivian nonagenarian, told Rabbi Shaul Reitzes, 34, who heads the senior adult education learning program, Tiferet Zkeinim Levi Yitzchak. This month marks thirty years since its inauguration.

Some 50 seniors regularly attend the program which meets five days a week for two and a half hours of Talmudic, Biblical and Chassidic study. For the seniors, many well into their eighties and nineties, it has brought a sense of community and friendship, an important gift to people with time and their hands and an ever-thinning circle of lifelong friends. The classes take place at the Merkaz Chabad Lubavitch in Tel Aviv’s Sheinkin neighborhood.

“There is a feeling of unity, just like family,” says Chaim Fikrash, 76, who worked as a journalist for over fifty years.

Named for the father of the Lubavitcher Rebbe, Rabbi Menachem Mendel Schneerson, the program was the Rebbe’s brainchild in 1980. The Rebbe felt that retirees should never truly retire, but continue to remain intellectually active. He encouraged the establishment of learning circles for retired men and women to study Jewish scholarly texts.

For Zvi Daor, the study group has distracted him from his daily medical issues. He finds the study intellectually stimulating. Standing next to Reitzes, he jokingly says, “I need to understand every word, forgive me for me nudging you from time to time to explain it again.”

Daor has a background in Jewish learning, but most of those who attend are, despite their age, new to Talmud study. “When I was supposed to be studying, I was in a concentration camp,” a survivor once told the group.

The seniors are sticklers for showing up on time. Daor prepares for the more fragile their coffee and tea “exactly the way each person wants it.” After the classes many stay for a little while to schmooze.

According to Reitzes, this part of the day is no less important than the learning. “They follow each other’s health, make sure they go to their appointments and share information about good doctors and treatments that worked for them,” says Reitzes, whose grandfather Rabbi Uri Ben Shachar, led the program for more than 20 years, asking his grandson to take him over shortly before his passing.

“Over many years I met many jurists, attended many lectures by well-known orators, yet I feel that at our classes there is something special. I enjoy every single moment of my time here,” says Eliezer Karni, 94, who is semi-retired from his law practice, and takes time to study daily.

“There is nothing like a class in the Talmud by Rabbi Reitzes.”

With reporting by Moshe Marinovsky of the Kfar Chabad magazine.

Related Articles
View All
New Computer Center for Moscow Seniors
(lubavitch.com) The Chabad-Lubavitch Sharei Tzedek charity center in Moscow launched a new state of the art computer center on Wednesday, adding internet, email and computing…
Ottawa Government Grant Supports Chabad’s Initiative for Seniors
For its work teaching seniors to navigate the rapidly evolving technological and medical fields, the Jewish Youth Library of Ottawa received a $10,000 grant from…
It’s Pies for Joy to Say Thanks to Seniors
It was all smiles when preschool children and their families made Pies for Joy for seniors in time for Thanksgiving. The Gan Camarillo Preschool and…
Initiatives at the Chabad Conference: Smile On Seniors (SOS)
As an outreach activity, visiting seniors is even older than the people it serves. But Chabad’s new “Smile On Seniors” approach to bonding with the…
Seniors Get A Second Wind With Chabad Programs
As more and more boomers get their welcome kit from AARP (American Association of Retired Persons), Chabad programming for seniors is experiencing a boom of…
Get Inspiration to your inbox!
Newsletter
Join our weekly newsletter for inspiration and updates
Donate
Find Your Local Chabad Center
Chabad
About Chabad-Lubavitch
About Chabad Lubavitch
The Rebbe
Headquarters
Magazine
Magazine
News
News & Updates
In The Media
Impact
Social and Humanitarian
Social and Humanitarian
Education
Education
Community
Community