Over seventy-five rabbis who lead Russia’s Jewish communities issued a joint resolution reaffirming their commitment to remain at their posts, and calling for peace 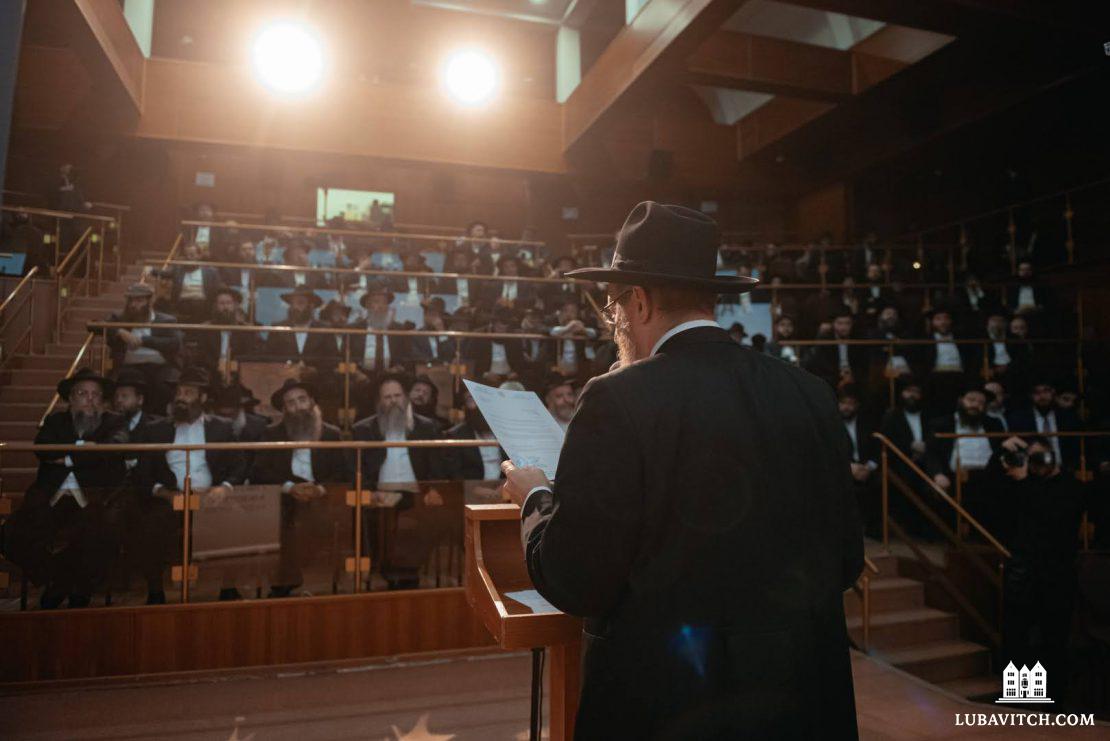 On Monday, September 5, over seventy-five rabbis who lead Russia’s Jewish communities held a convention in Moscow’s Marina Roscha Jewish Community Center, where they restated their commitment to serving their communities during times of peril and called for peace.

Life in Russia has become fraught with economic uncertainty, and the Jewish community in particular is sensitive to the prevalent feeling of isolation and insecurity. As Jewish leaders in posts as far-flung as Irkutsk and Perm, the rabbis share their community’s challenges, yet pledged to remain at their posts.

The emergency convention came during a three-day gathering of study and workshops designed to help the rabbis navigate the complexities of Jewish leadership in contemporary Russia.

Russia’s chief rabbi, Rabbi Berel Lazar, opened the conference by pointing to the beginning of a new school year as a reassuring sign. “Last week, we saw tens of thousands of Jewish students return to their Talmud Torahs, Sunday schools, and Yeshivas,” he said. “We will remain with our communities, call for immediate peace and an end to the bloodshed, and continue to build.”

In his address to the convention, Rabbi Alexander Boroda, President of the Federation of Jewish Communities of Russia, thanked the rabbinic leaders for supporting their communities during a tumultuous time. “Despite the difficulties, more than ever our communities are asking, ‘what does it mean to be a Jew?’” he said. “It is our duty to be there for them; we carry the responsibility to sustain our community’s spiritual life.”

Israel’s Ambassador to Russia, Alexander Ben Zvi, spoke to the assembly and delivered a letter from Israeli president Isaac Herzog. The convention heard letters of support from Israeli chief rabbis Rabbi Yitzchak Yosef and Rabbi Dovid Lau, human-rights activist Natan Sharansky, and leading European rabbis. “All Russian Jewry rely on you,” wrote Rabbi Yitzchak Yosef, Israel’s chief Sephardic rabbi.  “We encourage you; in the Torah’s opinion, just as a captain of a ship cannot abandon his passengers in a raging sea, you have a sacred duty to remain with your flocks.”

At the convention’s conclusion, the rabbis issued a joint resolution, stating in part, “We continue along the path that has guided us. . . we are committed to enriching the Jewish public’s Jewish identity, teaching Torah, Mitzvot, and Jewish traditions, strengthening our communities and educational institutions, and assisting all those in need.”

The resolution concluded with a call for peace, quoting the prophet Malachi: “Do we not all have one father? Hasn’t one God created us?” With this, the rabbis stated, “We call upon people of conscience everywhere to aid those in need, including refugees, and to end the suffering. We pray that Isaiah’s prophecy is fulfilled, and ‘nation shall not lift the sword against nation, nor shall they learn war anymore.’”

Related Articles
View All
Shluchim
Ep. 29: Everything Grows on Kauai … Why Not Yiddishkeit?
The 29th episode in its series about the personal struggles and achievements of Chabad representatives
Shluchim
Georgia Native Returns as Chabad Rabbi
Rabbi Chaim grew up just north of Atlanta in a home that was traditional, but didn’t practice all the particulars of a religious Jewish lifestyle
Shluchim
Chabad of Illinois’ “First Responders” Prepare to Confront Mental Health Crisis
On July 24 and 25, one hundred Chabad emissaries gathered for a Mental Health training conference in the Crowne Plaza Hotel in Northbrook, Illinois, just…
Shluchim
Lessons We Live With: An Infinite Reservoir
Ahead of Gimmel Tammuz, Lubavitch.com asked Shluchim to share a teaching of the Rebbe that informs their approach to shlichus, and their lives.
Get Inspiration to your inbox!
Newsletter
Join our weekly newsletter for inspiration and updates
Donate
Find Your Local Chabad Center
Subscribe
|
Log In
Chabad
About Chabad-Lubavitch
About Chabad Lubavitch
The Rebbe
Headquarters
Magazine
Magazine
News
News & Updates
In The Media
Impact
Social and Humanitarian
Social and Humanitarian
Education
Education
Community
Community