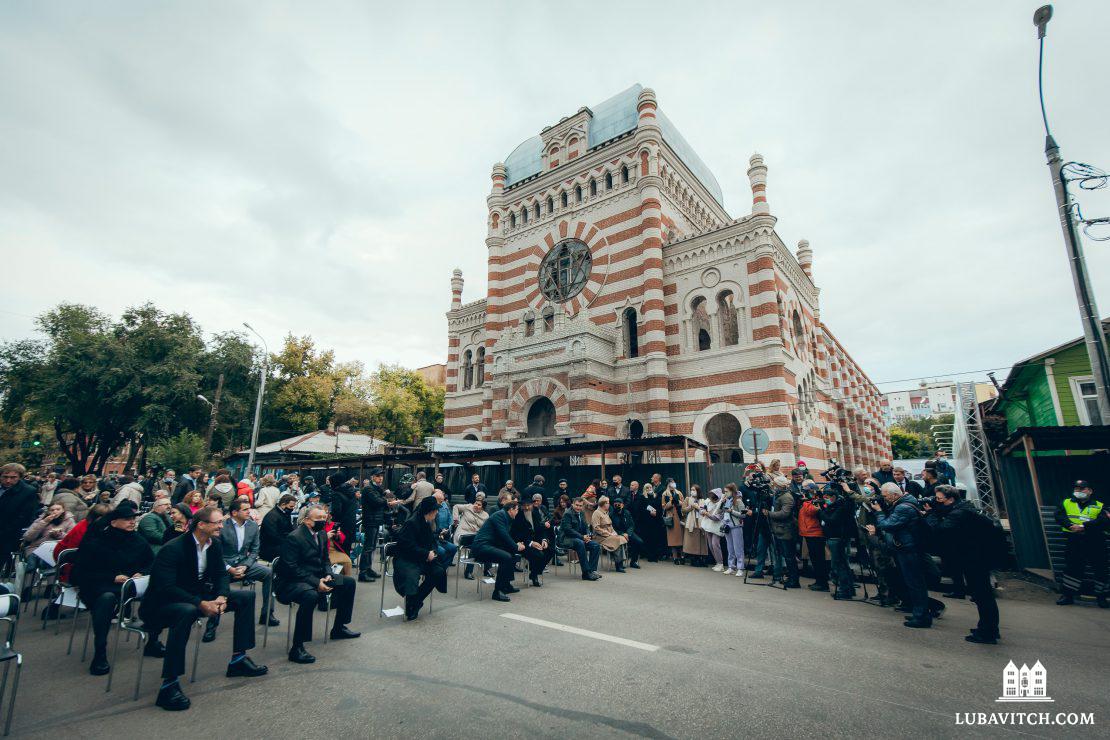 The red and white brick walls that once housed Samara’s Choral Synagogue stand proudly against the vast blue skies of southwestern Russia. Built in 1908 on the banks of the Volga River, its distinctive architecture earned it renown as one of the most beautiful synagogues in the world. Confiscated by Soviet authorities in 1923, the building languished as a house of culture and then a bread factory. After nearly two decades of negotiations, Chief Rabbi Shlomo Deutch secured the building’s return to Jewish hands.

On September 30, hundreds of community members, dignitaries, and guests gathered to lay a symbolic cornerstone on the synagogue site. The ceremony marked the beginning of a lengthy restoration process; a landmark moment in the effort to return the crown jewel of Samara’s Jewish past to its former glory. Since the return of the historic structure to Jewish hands in 1998, Rabbi Deutch and the local Jewish community have invested untold time and effort toward evacuating the dilapidated bakery equipment, developing reconstruction plans, and obtaining the necessary permits. Still, for now, the synagogue stands empty, awaiting the commencement of reconstruction.

Speaking before reporters and supporters, Russian Chief Rabbi Berel Lazar said the restoration is a milestone in the spiritual rejuvenation of Jewish life in Russia. “Almost one hundred and twenty years ago, Samara’s Jews built a synagogue. To them, it was more than just a physical structure. They imbued it with spiritual meaning. The Communists destroyed all of that. But thank G-d, today the attitude towards Judaism across Russia is positive, and we can rebuild this historic place of worship.”

Local business people and generous residents of all walks of life came together to underwrite the costs of the delicate and complicated restoration project. Governor of Samara Oblast, Dmitry Azarov, thanked supporters for their kindness and said he has no doubt the restored synagogue will become an important cultural attraction for the city. “This unique and beautiful building will become a center of gravity for people of all nationalities and religions,” said Azarov.

After additional remarks from dignitaries and a showcasing of the planned Jewish Community Center, the ceremonial attachment of a plaque to the cornerstone marked the occasion. The ultimate vision for the building has it providing all the community’s Jewish needs. The structure will house a large central sanctuary and classrooms for educational programs for all ages, alongside a museum, a youth club, and charitable programs for the elderly and needy.

The celebratory spirit is palpable among the Samaran Jewish community, says Rabbi Shlomo Deutch. “To restore the synagogue that our grandparents built is a dream come true for the Samara community.”