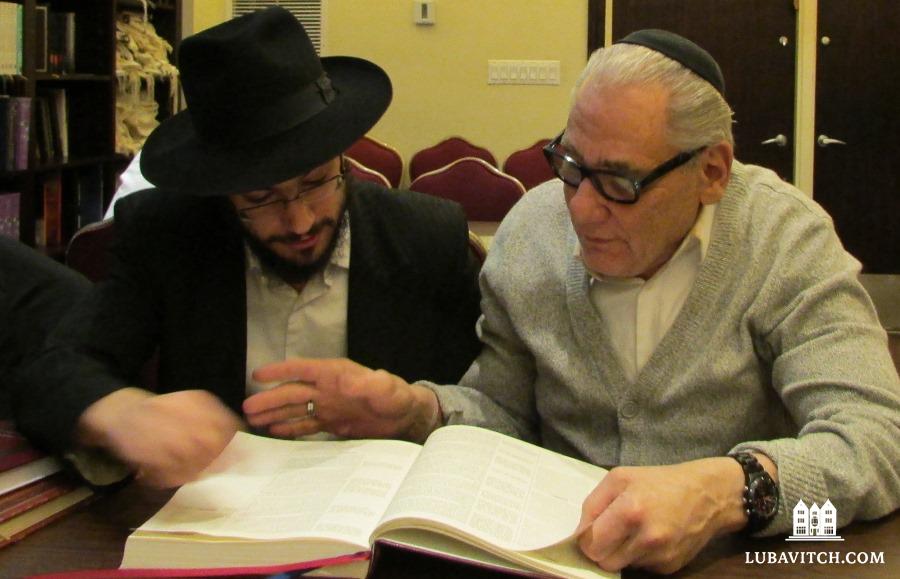 On a life-long spiritual quest, 72 year-old Burt Siegel, the much beloved leader of the Reform Shul of New York (on the Lower East Side) has finally dropped anchor at Chabad of the Upper East Side. There he found a tradition that has given him “a sense of the depth of Jewish spirituality that I only knew about vaguely.”

While he continues to lead the popular liberal congregation he founded 14 years ago, Burt davens with the 7:30 Shacharit minyan at Chabad of the Upper East Side every morning. After wrapping his tefillin—a proud new acquisition from a reliable sofer—he joins the small Kollel of young Chabad rabbinical students where he studies Talmud, Tanya and Chumash with his chavruta study partner, Shmuli Silcove.

Soft-spoken but energetic, Burt, or Simcha Bunim, as he likes to be called, met with Baila Olidort on a recent Monday afternoon following his Kollel session at Chabad.

When I daven from the siddur I have a sense of being linked to the tradition that goes back thousands of years in a way that I hadn’t experienced before.

When was the first time you actually put on tefillin?

When I was in Israel, about 8 months ago.

That’s surprising—you’ve been living in Manhattan for so many years, haven’t the Chabad students somewhere on the city streets ever approached you?

Many times. I tried to avoid them. I never agreed to put on tefillin.

We were taught that tefillin was to be understood as a metaphor, that the words “you shall wear them as a sign between your eyes and on your arm” was an abstraction.

What is the experience of tefillin like for you now?

I always thought that my hands would do good and my mind would turn to thoughts of kindness and love. But it was just in my mind, very abstract. Now, when I feel the tefillin on my head and hand, there is a reality about it. My thoughts feel deeper, stronger and grounded.

You were always on a quest for spiritual meaning.

I was always a stranger looking for some kind of spirituality that would endow my life with meaning. I  traveled to India to visit Hindu Ashrams. I’d go to temples and attend classes there, but it didn’t touch me. So I kept going back. Thirteen times.

But you studied, and were ordained at HUC?

Yes, Bible was studied in terms of the Documentary Hypothesis, in historical terms, but not as a source of Divine inspiration. It really was devoid of a sense of spirituality. It was not about supporting people in their spiritual search or teaching people in any way how to connect with Hashem.  They told us that Talmud was irrelevant, archaic and anachronistic.

And now you’re studying Talmud with Shmuli, your chavruta. What’s that like?

Yes, we’re learning tractate Pesachim. At first I felt it was anachronistic, but I continued studying because of the way it linked me to a tradition that was so rich, that went back thousands of years, a tradition that really celebrated life, and I fell in love with the tradition.

Studying Talmud, I started to appreciate seeing things from different perspectives. I began to appreciate the legitimacy of holding two different opinions and striving to find the authenticity in both.

You are studying at this Kollel of Chasidic rabbis who are in their 20s, young enough to be your grandsons. And yet you seem so comfortable here.

When Rabbi Benzion Krasinianski invited me to join the Kollel of young 22-23 year old students, it was awkward because these young Chabad rabbis live very different lives from me. But I stayed because I wanted to learn the texts. Lectures about [Judaism], books about [Judaism] are one thing. But I needed the texts.

By now, they are my friends. They made me feel that I fit right in. They recently celebrated my birthday with a farbrengen. I came to see that these guys have really internalized the Chasidus. And they are real, sincere, and happy. I felt, “my G-d I have the privilege of being with a group of people that are smart and happy, what more could I want?”

How did you come to make this radical change at this point in your life?

At some point last year I began to feel a yearning for a richer Jewish life. On a deeply personal level, I realized that what I had wasn’t the Jewishness that I wanted to live on a day-to-day basis.

I felt a deep desire to study Torah texts in Jerusalem. The last time I was there was 30 years earlier. I wanted to study in a real yeshiva, but most of the places I called made an issue of my age. But I wouldn’t give up. I was relentless. Then a friend told me about Yeshivat Simchat Shlomo in Jerusalem, and that’s where I went. It was a beautiful experience. That’s where I put tefillin on for the first time in my life.

What happened when you came back to New York?

I kept putting the tefillin on and I was thinking, ‘how can I get to a more traditional life?’ And I’m trying to put this together with being a Reform rabbi because it’s kind of at odds with what Reform teaches about tradition. I was reflecting on all this and I had a thought that I really didn’t anticipate. I began toying with the idea of going to Chabad. But I had negative ideas of Chabad.

Well I thought it was intrusive and rude. Then I heard it was a cult. But despite it all, I went in there one Shabbos morning. I was nervous about it. But the moment I stepped in, I felt at home. Like I belonged. Rabbi Krasinianski had no idea who I was, yet he came up to me and asked me if I knew the blessings on the Torah and he invited me to have an aliyah. That was such a loving gesture.

I’ve since fallen in love with Chabad. Chabad opened a door to spirituality for me that I was seeking all my life. It just resonated with me because one of the purposes of my life was to find G-d in the everyday. This is what Chabad teaches. My whole life has now become permeated with a sense of the G-dly in a way that I never had.  Every moment is now an opportunity to feel the presence of G-d in my life on a personal level.

Does your congregation know about the reforms you’ve made in your own religious life?

I’m sharing my journey with my congregation openly and honestly. They know that I come here every day, that I daven, put on tefillin and learn in the Kollel. I tell them that I’ve found a new and deeper sense of appreciation for tradition. I talk about my spiritual journey.

Is it strange for you to be doing this while leading your congregation?

I don’t feel any disconnect between serving my liberal synagogue and my growing traditionalism. My spiritual journey has actually helped me bring even more spirituality to my wonderful members. I’ve decided to send a weekly email to my congregation with some of the spiritual teachings derived from my studies here. I hope my new Jewish life will be a source of spiritual blessing to all whose lives touch my life and especially to my loving and beloved congregation.

What are your thoughts about your future?

I was going to experiment with this. From an experiment it has become an experience that I will stay with for the rest of my life. Where it will take me I don’t know.

Related Articles
View All
Jewish Identity Grows On Manhattan’s Upper East Side
Sensitive to an existential void that begs a different kind of answer, some Upper East Side Jews eventually find their way to Chabad of the…
Get Inspiration to your inbox!
Newsletter
Join our weekly newsletter for inspiration and updates
Donate
Find Your Local Chabad Center
Subscribe
|
Log In
Chabad
About Chabad-Lubavitch
About Chabad Lubavitch
The Rebbe
Headquarters
Magazine
Magazine
News
News & Updates
In The Media
Impact
Social and Humanitarian
Social and Humanitarian
Education
Education
Community
Community