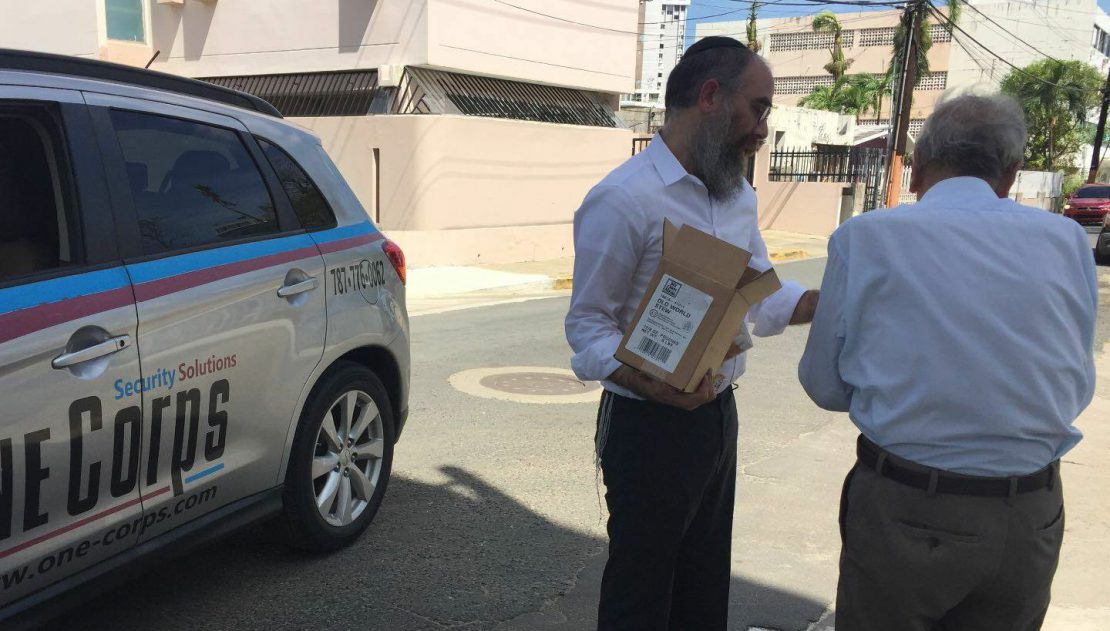 It was the morning of Rosh Hashana, and the folks over at Chabad of Puerto Rico were preparing for the holiday as a category four hurricane moved in fast and furious.

Chabad of Puerto Rico, led by Rabbi Mendel and Rachel Zarchi, has been the main conduit of support for the Jewish communities in storm-wrecked St. Thomas and St. Martin. Now it too, still reeling from Hurricane Irma earlier this month, would take a beating. Hurricane Maria is the worst Puerto Rico has seen in some eighty years.

But Rosh Hashana came all the same, and so did prayer services, holiday meals and guests. Relief efforts continue as Chabad of Puerto Rico regroups, and helps others in the aftermath.

As the punishing winds finally subsided after a pounding of fourteen hours—during which time all internet reception was down and we were unable to receive any news of where the eye of the storm was, we had limited calling ability and we called a friend in Florida who works with a storm tracking agency. He reported that the last reading of wind velocity was 155 MPH at the SJU airport, located a few blocks from the Chabad House, before all of the radars went down.

The natural flow of water on Rosa Street, where Chabad is located, is towards the north, in the direction of the ocean. At 5:30 a.m., there was a raging river with waves three feet high flowing in the opposite direction.

Surveying the Chabad House, we found that the synagogue was flooded with hundreds of gallons of water, and one section of the roof was totally ripped off. We began sweeping the water out into the patio, and with the help of some amazing volunteers, the synagogue was ready for use after several hours of water removal.

As we finally stepped out of the Chabad House at 4:00 p.m. to survey the scene outside, we saw devastating destruction, andpeople who ventured out at that time looked on in dazed disbelief: blown-out windows, toppled utility poles, downed trees, smashed cars, homes and hotels without their roofs, and massive commercial signs littering the roadways. The landscape had been altered beyond recognition 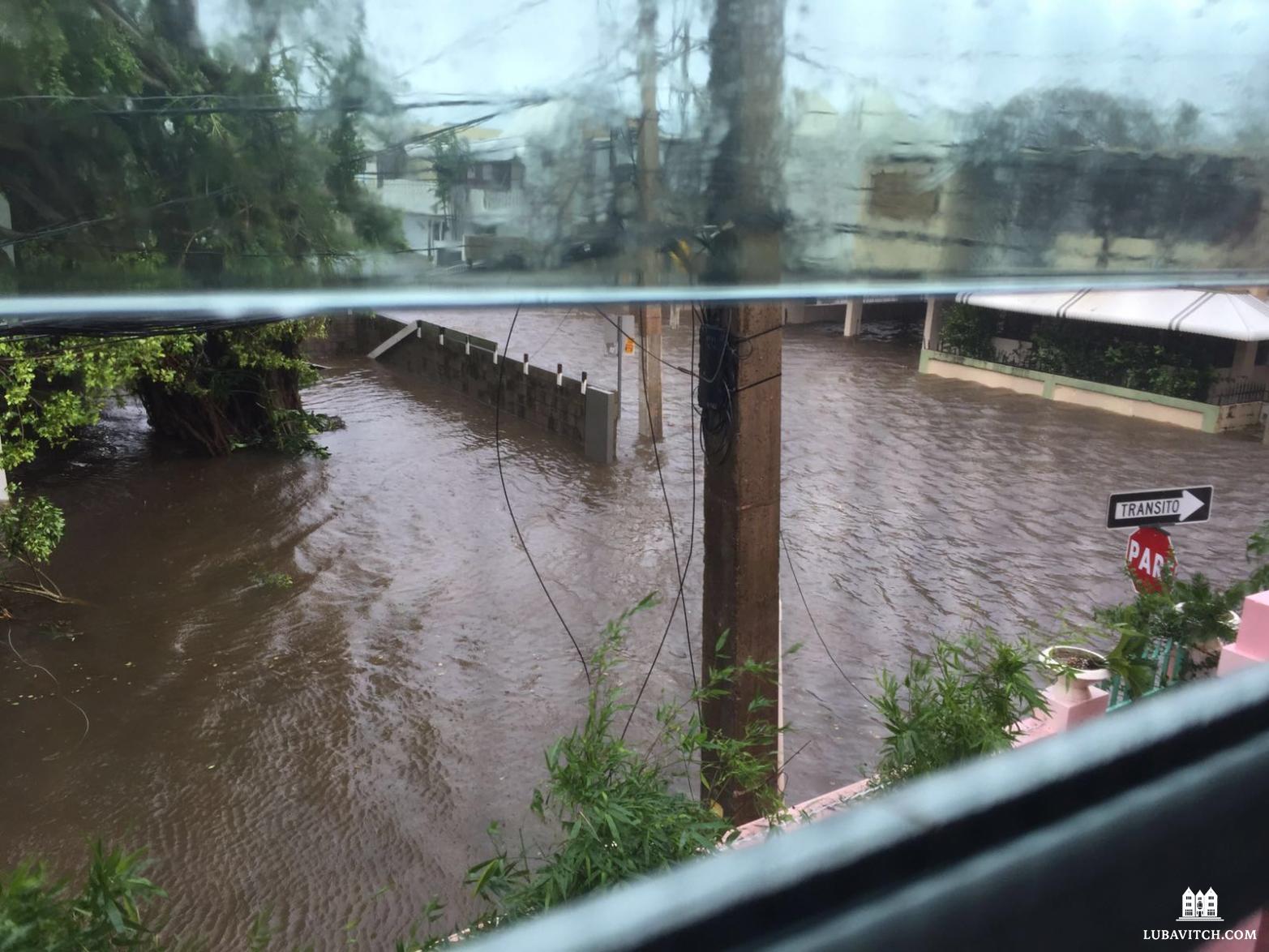 Together with a community volunteer, we made it over to our home complex, which resembled a war zone. We found a downed ceiling in one of the kids’ rooms as a result of some damage to the roof, and water seepage in various rooms. We quickly drained two feet of water from the backyard that was threatening to enter the home. Our neighbors were out of town, so we headed over to their home and unclogged the drains to the patio allowing water to recede. We ran back to Chabad with twenty minutes to get ready to prepare for Rosh Hashanah

A few neighbors made it over for evening services. We enjoyed a beautiful holiday meal prepared by the rebbetzin, and we all thanked Hashem for allowing us to enter the new year after experiencing so much devastation.

Before blowing the shofar, I walked the neighborhood a bit, and just took in the sight of all of the wrecked homes and hotels—Hampton Inn wrecked, Intercontinental a disaster, the-Ritz Carlton Hotel covered with trees and pieces of its missing roof. I was told they would need to close for repairs for some time. The main street was flooded and impassable.

The massive flooding on many of the access routes made them impassable for most people. Amazingly, though, we had minyans both days! People came in throughout the day joining us for meals, to meet people, chat, share their stories and refresh themselves with drinks, food and the use of something as basic as our restrooms. We had volunteers from a security company pick up RME meals to distribute in areas where people had no access to food.

We were in total news blackout as to what was going on around the island. Without the benefit of communication, phone service, TV, radio or internet service, confusion reigned. Slowly, word began to spread about the extent of the devastation and destruction to the interior of the islands, with massive flooding and deaths reported.

Worry and concern abounded, and many people could not reach family or friends. With roads impassable, most of these areas are totally cut off and inaccessible. We keep receiving emails and messages to look out for families or friends across the island, and we will do all we can to bring back some news. Currently we have no way to communicate other than email in certain hotspots and spotty mobile reception with some mobile networks. We are not able to communicate with most of our community members—we desperately hope that that will all change shortly. 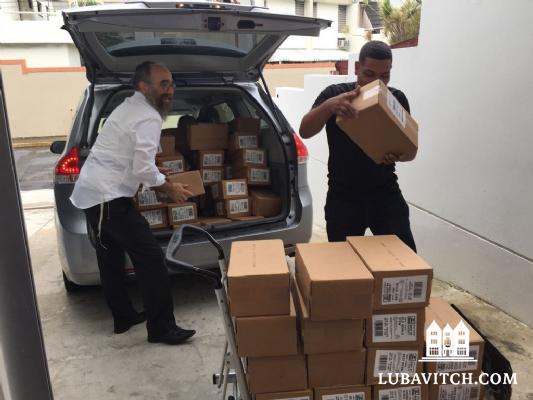 At present, the entire infrastructure on the island is in total collapse. There is a total outage of power, and buildings and hotels with generators are now in ration mode, as they cannot get refills for their fuel and diesel. Gas is scarce, and the few stations that are open are guarded by law enforcement and have lines hours long–with priority given to emergency and medical personnel. Most of the island is without fresh water, and 24/7 supermarkets are opening for limited hours due to limited supplies. Businesses that are open are limited to cash sales resulting from the system collapse—as such, there is increased looting and increasing desperation.

Our current goals for funding include food and water for distribution and essential supplies. We need trucks to deliver potable water, fuel and gas for Chabad generator usage, twenty-four-hour armed security at Chabad over the next six weeks, and repairs to Chabad center for items not covered by insurance.

In the meantime, we are grateful for the continued expressions of warmth and friendship!

To join in the relief efforts, visit www.chabadpr.com/relief.