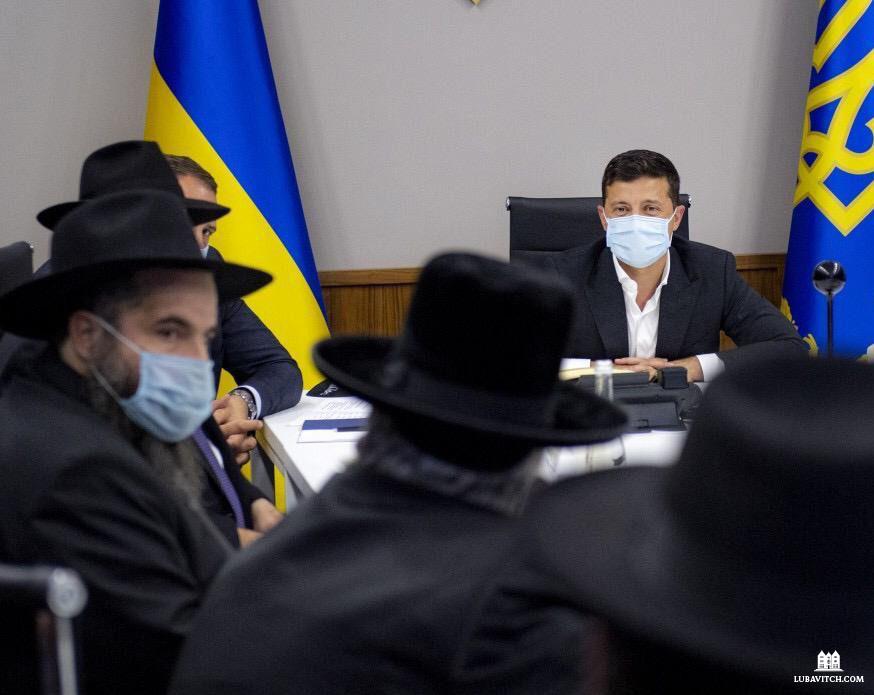 President Volodymyr Zelenskyy met with Ukrainian Jewish leaders, among them many Chabad emissaries, to discuss safety and compliance with pandemic regulations during the upcoming High Holidays.

Rabbi Meir Stambler, Chairman of the Council of the Federation of Jewish Communities of Ukraine, assured the President that the Torah demands we value and safeguard human life.

The President, who recently granted national status to a number of religious holidays including Rosh Hashana, Pesach and Chanukah, opened the meeting by thanking the leaders for their support and prayers for peace in Ukraine on their recent independence day.

“There are many different people, many nationalities and religions in Ukraine, but it is great that we are all united,” he said.

The president also officially updated the Jewish leaders about plans for a memorial at Babyn Yar, the ravine where in September 1941 33,771 Jewish men, women and children were shot dead in two days by the German Wehrmacht and their accomplices.

On July 29 of this year, President Zelenskyy gave approval for a Holocaust Memorial Center to be built at the site to commemorate the victims and provide Holocaust education. “It’s important for people around the world to understand what happened here when they get here. It is important to remember what people have gone through so that it never happens again. Therefore, the task is to work out the concept as soon as possible,” the President told the assembled.

Related Articles
View All
Ukraine
Healthcare for the Body and Soul
Chabad at forefront of vaccine distribution effort in Ukraine
Get Inspiration to your inbox!
Newsletter
Join our weekly newsletter for inspiration and updates
Donate
Find Your Local Chabad Center
Subscribe
|
Log In
Chabad
About Chabad-Lubavitch
About Chabad Lubavitch
The Rebbe
Headquarters
Magazine
Magazine
News
News & Updates
In The Media
Impact
Social and Humanitarian
Social and Humanitarian
Education
Education
Community
Community