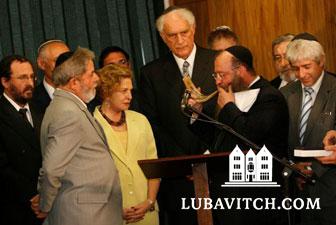 Chabad Shluchim formed a large percentage of the delegation that visited the president of Brazil, Luiz Inácio Lula da Silva before Yom Kippur.

The meeting was arranged by Mr. Jack Terpins, president of the Latin American Jewish Congress, a close friend of President Lula, as well as an active member on the shul board of Rabbi Yossi Schildkraut of Sao Paulo, Brazil.

The delegation was very warmly received by President Lula and he praised Chabad for the wonderful work they were doing, in helping the poor residents of Brazil. As a leader who spent his youth in poverty, his campaigns of eradicating hunger from the country coincide with Chabad’s humanitarian aid projects.

“I appreciate your religion and tradition, and it is a respect that grows from year to year,” President Lula said.

Head Shliach of Brazil, Rabbi Shabsai Alpern, gave the president a heartfelt blessing, and Rabbi Yossi Schildkraut presented the president with ornate silver ‘yad’, the pointer of a torah scroll, and a basket of traditional round challah, apples and honey.

The dignitaries that also included Chabad Rabbis Yehoshua Goldman and Yossi Shimonavitch, Boris Ber, president of the Federation of the State of Sao Paulo, Sergio Nisker, the  president of the Federation of Rio de Janeiro, and a delegation from Argentina and Chile were treated to a rousing rendition of the classic holiday tunes from a renowned cantor.

Related Articles
View All
Holiday & Shabbos
Purim Notes From The Chasidic Rebbes
Mordechai “The Jew” Mordechai was a Benjaminite, but he is called “Yehudi,” literally meaning a descendant of the tribe of Yehudah. Likewise, the Megillah refers…
Holiday & Shabbos
From Fruits to Roots
Two generations came together to celebrate Tu B’Shevat, the New Year for trees, at the Friendship Circle of Free Hebrew for Juniors in Montreal, Canada,…
Holiday & Shabbos
Tu B’Shevat: Where’s the Fruit?
But in fact this plant-based holiday takes place in the middle of winter. Considering that the fruits of the trees haven’t yet begun to grow,…
Holiday & Shabbos
Ancient Scroll Sparks New Journey For Iranian Teen
It was about thirty years ago when an old Sephardic Jew named David Abtan walked into my office and said ‘Rabbi, I need a favor…
Get Inspiration to your inbox!
Newsletter
Join our weekly newsletter for inspiration and updates
Donate
Find Your Local Chabad Center
Subscribe
|
Log In
Chabad
About Chabad-Lubavitch
About Chabad Lubavitch
The Rebbe
Headquarters
Magazine
Magazine
News
News & Updates
In The Media
Impact
Social and Humanitarian
Social and Humanitarian
Education
Education
Community
Community