Poway: Healing in the Aftermath

When terror walks into a Chabad House 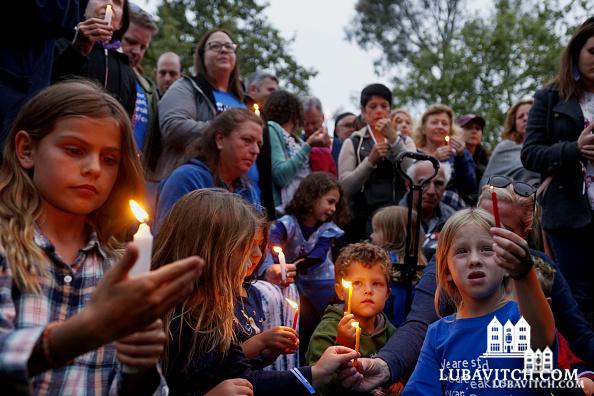 It was going to be Lori Kaye’s first time saying Yizkor for her mother, who passed away in November 2018. In Jewish tradition, Yizkor, the memorial prayer for parents, is recited just four times a year, on certain Jewish holidays. Lori’s first opportunity to recite the sacred words in her mother’s memory would have been on the last day of Passover which this year, fell on Shabbat.

Lori arrived at theChabad of Poway synagogue, where she had been a member for twenty five years, just before the 11:30 A.M. Yizkor service and prepared herself for the memorial prayer. She never got the chance to say it.

Moments before the service began, a gunman burst into the synagogue and shot Lori at point blank range. The gunman then turned and fired on the synagogue’s senior rabbi, Rabbi Yisroel Goldstein, who lifted his hands to protect his face from the shot. The bullet blew off the index finger of his right hand and severely injured his left.

The rabbi scanned the room, wrapped a tallit around his bloody hands, and rushed to protect a group of children. Six more shots rang out, injuring eight-year-old Noya Dahan and her uncle, thirty-four-year-old Almog Peretz of Sderot, Israel, who suffered a gunshot wound to the leg as he and Rabbi Goldstein led the group of children to safety. The congregation erupted into chaos as everyone fled from the shooter.

Meanwhile, Rabbi Goldstein ran back to the lobby where Lori lay dying. Her husband, a doctor, had fainted from shock and was slumped beside her. Their twenty-four-year-old daughter, who had come down from Los Angeles to support her mother on this meaningful day, hovered nearby, overcome with grief. “It felt like forever before the paramedics arrived,” said Goldstein. “They had to wait for the police to give them the all-clear before entering the building.”

The traumatized congregation was ushered to a nearby safe zone, where first responders triaged the wounded. Hours after the planned service, the Poway Jewish community finally recited the Yizkor prayer in a private home near the site of the shooting. This time, they said it for Lori.

Lori Gilbert-Kaye (left) with her daughter Hannah and husband Howard.

The Aftermath of Anti-Semitism

It’s been weeks since his longtime friend and congregant was murdered before his eyes, and Rabbi Goldstein, both hands still encased in casts, has barely had a moment’s quiet.

This attack called on the rabbi to protect, lead and strengthen his community. As his congregation sheltered in place on the day of the shooting, he stood on a chair and addressed them, declaring, “We are strong. We are united. Am Yisrael chai [the nation of Israel lives].” Hours later, from his hospital room where he was recovering from surgery, he broadcast a video message to the world. Lori, he told us, was the embodiment of goodness, and Chabad would respond to the horror of this day with light enough to displace its awful darkness.

In the days following the attack, Goldstein met with President Trump at the Oval Office, addressed prominent clergy at the National Day of Prayer meeting in the Rose Garden, lectured to eight hundred Jewish youth who were visiting Auschwitz, and spoke with the media–all while personally counseling his grief-stricken congregants and paying regular visits to the house where Lori’s husband and daughter were sitting shiva.

For the rabbi and the Chabad of Poway community, the vigils, events, and memorials offered a constructive outlet for their overwhelming grief. “The attack is still so raw, and our community is still bleeding,” says Goldstein. His voice breaks as he tells of Lori’s husband now saying Kaddish every day at the synagogue’s evening service.

Ever-active in community building, Lori was the one who helped the rabbi secure an initial loan to build their Chabad house twenty-five years ago. Since then, Lori was known for getting involved with dozens of community initiatives, generously supporting the many Jewish causes she cared about. It’s largely thanks to her that Poway, a small suburb on the outskirts of San Diego, is now home to a Chabad congregation with seventy dues-paying members and a community that’s 200 strong.

For the Poway community, the most powerful ways to honor Lori’s memory will be by recovering and rebuilding. Young Noya, who still has shrapnel in her leg and near her eye, is having a hard time returning to synagogue. Goldstein and the synagogue board are hoping to raise funds to remodel the interior of the lobby.

And while Noya makes a physical recovery, the other children of Poway are making their own psychological recoveries. Thirteen children were in the synagogue on the morning of the shooting. They all heard the gunshots, and some were in the direct line of fire. Now, with the help of therapists and grief counselors from San Diego County, San Diego Jewish Family Services, Chai Lifeline, and other support organizations, these children are receiving counseling to help them through their trauma. Goldstein wants to ensure that they do not develop lifelong associations connecting synagogue attendance with this  terrifying experience.

“The silver lining in all this is that we are able to teach the rest of the world how to heal,” Goldstein says. “We let the world hear our screams and feel our pain so that we can prevent this from happening again. That thought helps us turn the grief into hope.”

Passerby place flowers at the memorial across the street from Poway’s Chabad center. (Sandy Huffaker/AFP/Getty Images)

An Old Specter, A Heightened Fear

The attack at Chabad of Poway was the second deadly shooting at an American synagogue n a span of six months. On October 27, 2019, eleven congregants were massacred at The Tree of Life synagogue in Pittsburgh, Pennsylvania. It was the deadliest anti-Semitic attack in U.S. history. Meanwhile, across the nation, anti-Semitic incidents are reaching historic levels. In 2018, there were 1,879 recorded attacks against Jews and Jewish institutions, according to the Anti-Defamation League. That was the third-highest year on record since the 1970s, when the ADL first started tracking anti-Semitic attacks.

While recent attacks on the Jewish community have been particularly violent, targeted hate crimes against Jews are not a new phenomenon. Rabbi Yerucham Eilfort, a Chabad emissary to La Costa, a city twenty miles west of Poway, says that his community has been “alive to the anti-Semitic reality for a long time.”

“I remember a shooting at a JCC in the San Fernando Valley twenty years ago,” he says. “The incident forced me to reflect on protecting my own congregation. There was the famous attack at Chabad of Mumbai ten years ago. Shortly after we opened our Chabad House in 1990, we had our windows broken and swastikas painted on our walls.”

Many Chabad emissaries in the United States say they have personally experienced some form of anti-Semitism, in the form of verbal street harassment or vandalism of Chabad property. In March, the glass front window of a Chabad synagogue in Bushwick was smashed during services. In May, two Chabad Houses in the Boston area were set on fire with the rabbis’ families inside. And a Chabad synagogue in Staten Island had hate speech graffitied on its walls.

No one was injured in these incidents, but the dramatic uptick in violence—In the first quarter of 2019, the NYPD reported more anti-Jewish hate crimes than all other bias-motivated hate crimes combined—

has prompted debate among Jewish leaders about balancing physical safety with public expressions of Jewish pride. Does a prominent menorah on display shine the light of Judaism, or is it a beacon guiding extremists to their target? These conversations have already proven a moot point in Europe, where government officials warn Jews against wearing yarmulkes, and rigorous security measures that recall American airport security are now in place at all synagogues.

“My son spent some time in France, and he was physically attacked for being Jewish,” says Eilfort. “In Europe there is not a safe feeling, and many do hide their kippah under a cap or tuck in their tzitzit. It will be a very sad day in America if we are at that point where we have to conceal who we are or go under the radar.”

But Chabad leaders insist that their communities are not there yet.

For Lori on the streets of Poway

“Ever since I came to Poway thirty-five years ago, I have been a walking billboard for Judaism,” says Goldstein. Though he has had slurs yelled at him from passing cars and cans thrown at him, seeing a rabbi wearing his Jewish identity fearlessly can be profoundly meaningful to local Jews, and Goldstein is not about to cower in fear. Indeed, following the attack, the rabbi called upon Jewish people to fill synagogues and do a mitzvah–to respond to the evil and darkness with goodness and light.

It is a message that speaks deeply to those affected. “We cannot allow them to take our faith away,” says Lori’s best friend, Dr. Roneet Lev. “We need to go to shul more. We have a good security plan and we believe that G-d is watching over us.”

As if getting people to come to synagogue was not challenging enough, the rabbis now have to assuage fears of physical violence. Community members want to see more visible security in place, and many will not come to synagogue without an armed security guard present. At a cost of $3,500 a week for an armed guard, Goldstein says it is an unsustainable financial burden for a small center that is locally funded.

And even if the funds were available, Elifort says that Chabad rabbis around the country must now figure out “how to make the place secure yet not feel like a fortress.” After all, the Chabad House is synonymous with an open door.

In response to the Poway attack, local law enforcement agencies across the country have reached out to rabbis to help train them in security measures, and Chabad centers are seeking Homeland Security grants to cover some of the increasing security costs. Rabbis recognize their responsibility and say they are as prepared as possible for the physical safety of their congregants.

In a world where the Holocaust is still a living memory for some, the universal condemnation from American leaders in response to the Poway attack is not something that the Jewish community takes for granted. Eilfort reflects on “the tremendous love and support we have received from across the political spectrum.” Four thousand people showed up to the Poway vigil the night after the shooting. “Ninety percent of the people were not Jewish,” he says. “They were just decent people who wanted to show their solidarity.”

A week after the attack, Poway’s Chabad community returned to their synagogue for the Friday evening Shabbat service. Six hundred people showed up to the service, many among them who had never attended a synagogue before. Three hundred stayed for a sit-down dinner that was set up by dozens of volunteers from the community, including thirty players and coaches from the Poway High School Titans football team.

As the community members made their way to the synagogue, they were greeted by hundreds of neighbors, friends, and supporters who lined the street leading up to the synagogue building. Following the hatefulness and violence of one deranged individual, fences covered with posters bearing expressions of solidarity and love, bouquets of flowers piled in mounds along the roadside, wellwishers of all faiths calling out in love and friendship were a reassuring reminder that the Jewish people do not stand alone in this country.

This article was featured in Lubavitch International magazine, Summer 2019. To order your copy, visit www.lubavitch.com/subscription.