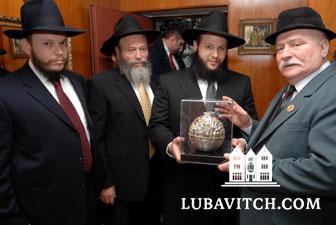 Former Polish Prime Minister Lech Walesa, with, from right to left, Rabbi S. B. Stambler, Chabad representative to Poland, his father and brother, in Israel. (photo:lubavitch.com)

(Lubavitch.com/LNS) Former Polish President Lech Walesa visited Tuesday with Chabad Chasidim and Chabad institutions in Kfar Chabad, Israel.
In a desire to become better acquainted with "Jewish, Chasidic life," the Solidarity founder and Nobel Peace Prize winner joined Rabbi Sholom B. Stambler, director of Chabad activities in Poland, where Chabad maintains centers in Warsaw and Cracow, on a trip to Israel.
Walesa visited the yeshiva in Kfar Chabad where he spoke with its dean, Rabbi Yakov Katz, originally from Poland, in his native Polish. Walesa also met with hundreds of yeshiva students, inquiring about their studies.

“I feel privileged to be in this holy space,” he said, expressing gratitude for the opportunity to see observant Jews in their natural setting. Walesa received a dollar from the Lubavitcher Rebbe prior to winning the presidency back in 1990. He carried the dollar with him for many years as a symbol of protection and blessing.
Israel's former Chief Rabbi Meir Lau, and Israel's former Ambassador to Poland, Professor Shevach Weiss, both Polish born and Holocaust survivors, were among those who joined Mr. Walesa at the Stambler home in Kfar Chabad.

Related Articles
View All
Update: Chabad Raises Jewish Profile in Poland
In an event rich with implications for Jewish life in Poland, Chabad-Lubavitch introduced the tradition of Chanukah's menorah lighting to the Polish Parliament this Chanukah.…
Headquarters
Court Confirms Chabad’s Exclusive Rights To Flagship Synagogue At 770 Eastern Parkway
“Chabad-Lubavitch World Headquarters is gratified by the decision handed down last week by the Civil Court of the City of New York, confirming exclusive rights…
Headquarters
Statement By Chabad Lubavitch World Headquarters
Every day that Jews are barred from entering the synagogue by armed guards is an unforgivable violation of the Jewish people!
Headquarters
Celebrating Radical Change With Chabad-Lubavitch
The banquet dinner, an elaborate, dramatic affair, is in itself no small nod to the challenge of radical transformation:
Headquarters
Hi Resolution: Annual Photo Captures Thousands of Faces
For some photographers, thousands of rabbis standing around the red ‘no standing’ sign outside Lubavitch World Headquarters are a dream; for others, a nightmare.
Get Inspiration to your inbox!
Newsletter
Join our weekly newsletter for inspiration and updates
Donate
Find Your Local Chabad Center
Subscribe
|
Log In
Chabad
About Chabad-Lubavitch
About Chabad Lubavitch
The Rebbe
Headquarters
Magazine
Magazine
News
News & Updates
In The Media
Impact
Social and Humanitarian
Social and Humanitarian
Education
Education
Community
Community