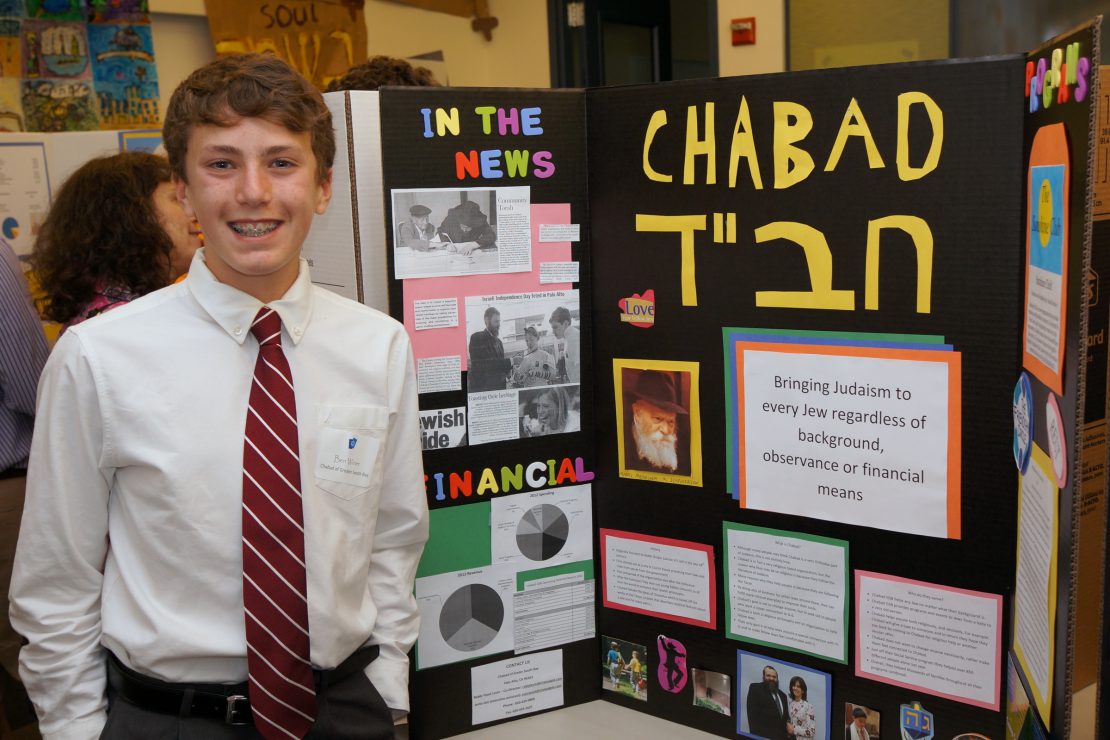 Making Chabad the cause of his passion, Ben “opened the eyes” of his classmates . . .

Every December, Americans open their wallets a little bit wider, making donations to their favorite causes as the year comes to a close and tax season looms just ahead. It’s also a time of year when many charities are wondering how to teach a young generation about the importance of philanthropy.

If you are the Gideon Hausner Jewish Day School, an independent, community school in the heart of Silicon Valley, you have them participate in the Avodah La’Olam Project.

A core component of the seventh-grade curriculum for some 14 years, the year-long program stresses the importance of tzedakah by having students find a charity or cause that they are passionate about, conduct research on it and then present their findings to their classmates. Monies that the students have collected throughout the school year are then donated to the various charities, both secular and Jewish.

For 13-year-old Benjamin Winer, now in 8th grade, the charity of his passion is Chabad, and his confidence in the good works they do to help other Jews led him last year to raise more than a thousand dollars for Chabad of Greater South Bay, directed by Rabbi Yosef and Dena Levin.

“I felt that since I am in a Jewish school, I wanted to do a Jewish organization,” the avid sports buff with a love for history and international affairs, said. Chabad seemed worthy to him, he explained, especially once he learned about some of the social service programs they run like the Friendship Circle, which helps special-needs children and their families.

But it was something else that really sealed the deal for the teenager: the mission of Chabad representatives who reach out to Jews around the world in an effort to draw them into community and tradition.

“It just seemed like a natural fit for me because I wanted to help Jews and that’s what Chabad does; they help Jews, and their commitment to help Jews is so strong.”

A PASSION FOR HELPING JEWS

An All-Star pitcher in the local little league and on elite travel baseball teams, and an active athlete on Hausner’s flag football, basketball and golf teams, Ben was heading into unchartered territory. Raising money for a religious organization, especially a Chasidic one, didn’t seem promising.

For starters, many of the charities the students at the non-denominational school fund-raise for are typically secular, social-action type organizations. Also, some of Ben’s classmates had never heard of Chabad. Some aren’t religiously observant, and others come from intermarried families.

Ora Gittelson-David, who, as the Jewish Service Learning coordinator/Jewish studies teacher at Hausner, oversees the program, wasn’t surprised by Ben’s choice of charity, but she was concerned that he would have an uphill battle.

“I encouraged him to [follow] his passion, but I told him that he would have to be persuasive because this is different than what our classes are used to” raising money for, Gittelson-David said.

When the aspiring young lawyer stood up in front of his classmates to talk about Chabad, he told them “that because of assimilation [the number of] Jews is shrinking” and Chabad tries to help Jews.

“He did an incredible job, both in his presentation and his persuasion and where he put the emphasis,” Ora Gittelson told lubavitch.com. “He was presenting something different and opening the kids’ eyes to other Jewish causes as well, and he really did it beautifully.”

As part of the program, all the student-picked charities receive a base donation depending on the amount of total funds raised that year by the seventh-graders. Since its inception, Hausner students have raised upward of $400,000 for many different charities. For the 2012-2013 school year, Ben’s grade raised $65,000.

Each of the 51 charities picked by last year’s seventh-grade received a starting donation of about $800. Then, after each student explained their charity, all of the teens received between $200 and $300 to allocate to their favorite causes.

According to school officials, Chabad ultimately received $1,241 from the students’ philanthropic endeavors.

That made Ben Winer one of that year’s top fundraisers.

Ben was surprised by the results. “I don’t know how it happened. They [my classmates] saw it as a pro-Jewish organization and a great cause. Even though [some of] their parents are intermarried they saw this as a good cause and said, I am a Jew and I want to give to Chabad.”

When the donations were presented to each of the charities on May 22, Rabbi Levin was there to accept on behalf of Chabad.

“It’s a wonderful thing that these young people are learning about tzedakah, and how to give tzedakah,” Rabbi Levin said of the school’s Tzedakah program. “And I was very gratified that this year some of it went to the outreach programs that Chabad is doing.”

The Levins, who have been leading Chabad of the Greater South Bay for 33 years, have since opened another four Chabad centers in the region to serve the area’s 10,000 Jews with a wide range of educational, religious and social service programs. They’ve come to know and appreciate Ben, who has afterschool study partners in Talmud and Shulchan Arukh (Jewish law).

“Ben is a very serious and intelligent young man who takes his yiddishkeit seriously,” observed Rabbi Levin. “I was very impressed with how he got into [his project] and made it real” for the students. “The research he did was amazing.  He really got what Chabad is all about.”

As for Ben, he believes that “if you physically do the act of a mitzvah, it’s heartwarming for yourself and the person you are helping. I just feel Chabad is so devoted that they will use the money they get and go anywhere to find a Jew.”

Related Articles
View All
About A Good Jewish Cause
Use the preview site to make sure the text you enter here fits.
A Train Crash, A Missing Spouse, A Day in the Life of Two Chabad Rabbis
A woman from the Houston was area injured in the Metro-North train crash in the Bronx. Her husband was trying to locate her. Could Chabad…
Education
Remembering Rebbetzin Chana: Jewish Feminine Role Model
A feminine role model of Jewish activism and proponent of Jewish scholarship, is being remembered today, on her yahrzeit.
Education
Beginning With Shabbos
Start the children’s school day right, and the rest will follow.
Education
Jewish In Berlin And Scoring High
If Jewish parents in Berlin worried that sending their children to a traditional Jewish school would leave them with compromised scholastics in math, history, and…
Education
Florida Schools Set for Silent Start to the Day
Landmark bill passed with bipartisan support will mandate a moment of silence for 3 million public school kids.
Get Inspiration to your inbox!
Newsletter
Join our weekly newsletter for inspiration and updates
Donate
Find Your Local Chabad Center
Subscribe
|
Log In
Chabad
About Chabad-Lubavitch
About Chabad Lubavitch
The Rebbe
Headquarters
Magazine
Magazine
News
News & Updates
In The Media
Impact
Social and Humanitarian
Social and Humanitarian
Education
Education
Community
Community