Sydney’s adults with disabilities lend a hand in the kitchen 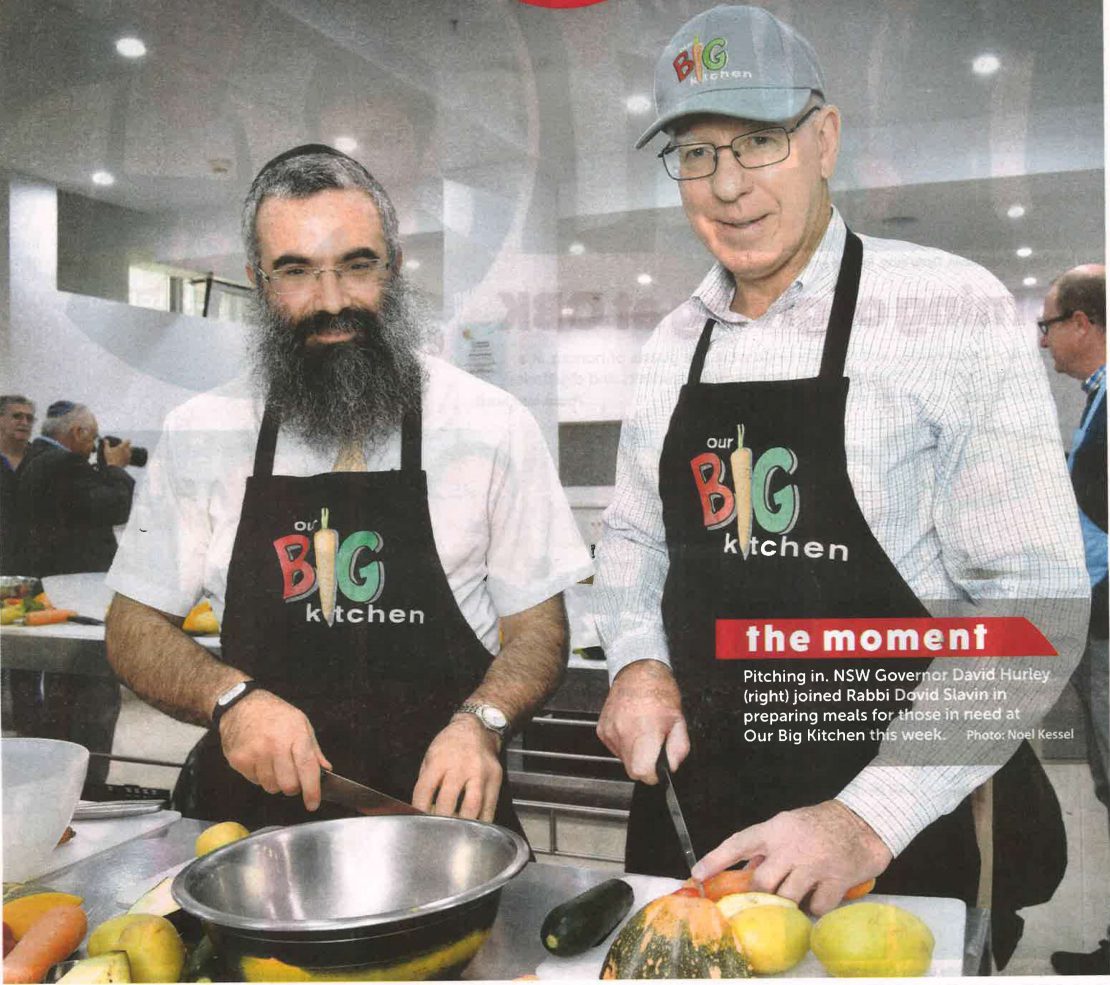 An article about Our Kitchen Hand, featuring Rabbi Dovid Slavin and NSW Governor David Hurley, on the front page of the Australian Jewish News.

Brittany Karpin, 21, has autism and is non-verbal, yet feels right at home in this bustling kitchen that serves up 70,000 meals a year to the needy. The Sydney native has been involved with Our Big Kitchen since finishing school three years ago, and now volunteers at the kitchen two days a week. She doesn’t let her personal challenges get in the way of her love for cooking and helping others.

Brittany’s not the only individual with special needs there; in fact, the group has grown so quickly over the past few years that directors Rabbi Dovid and Laya Slavin and the OBK team have now partnered with community organization Jewish Care and the Australian Government to launch a program called Our Kitchen Hand, which gets individuals with special needs involved in the kitchen.

“Several years ago, there was a child with special needs experiencing some difficulties, so his parent requested that this child be in OBK whenever possible, simply because it’s a very warm, inclusive environment,” explains Rabbi Slavin. There’s always room for an extra pair of hands in a commercial kitchen, so the young man quickly became a part of the operations. “Soon, it became clear that he really enjoyed coming, and the staff and other volunteers embraced him very warmly, so word began to spread that this is a place for people looking for social inclusion.”

It moved quickly from there: they now have twelve participants with a range of disabilities requiring different levels of assistance. The Australian government has provided financial assistance, and Jewish Care are lending their expertise in the disability sector to the project.

In addition to helping out in the commercial kitchen, Our Kitchen Hand participants also have an oversized domestic kitchen of their own to learn skills that are transferable to a home setting. “At our home, like in many homes and families, the kitchen is where it all happens,” shares Rick Karpin, Brittany’s father. “Brittany’s always had a huge interest in the kitchen environment, and her skills are improving all the time… even when she isn’t participating productively in the preparation of food, she loves observing and feeling a part of the operation.”

Danny Moss, another participant, suffers from epilepsy and hearing loss. His father Tom appreciates how the OBK has given Danny the chance “to be a part of a bigger picture” and to help others. “Danny loves socializing and sharing ideas with all the people at the kitchen–it would be absolutely devastating for him to have to stay home and do nothing.”

It’s estimated that over the next ten years, over 500,000 individuals with autism will turn eighteen in the US alone, and while the special needs education system is clearly delineated, the next step can be uncertain for high-functioning individuals. Employers may not have the required support systems in place, or are otherwise hesitant to hire those with disabilities, and special-needs programs may not be sufficiently challenging or fulfilling.

While Brittany attends a social center when she’s not at the OBK, it’s her time in the kitchen and being productive in her work that gives “a great deal of purpose to her day,” says Rick. “Everyone from the head chef down to the last member of staff all make her feel so welcome and a part of the team, and that gives Brittany a great deal of satisfaction.”

A study by Autism Spectrum Australia found many benefits to employment for high-functioning adults, with participants describing positive experiences such as “self-actualization” and “a sense of being accepted and valued.” Rick concurs, describing how as a result of her work in the kitchen, Brittany has developed greater confidence “in all areas of life.” And Danny has had a chance to be employed and make productive use of his time, which would be impossible in a typical workplace.

Opportunities are beginning to open up for special-needs employment Among other companies, Microsoft has a program to hire people with autism, yet the United Nations estimates that 80% of adults with disabilities remain unemployed. “The OBK is providing an opportunity that doesn’t come around too often,” shares Rick. “These kids are treated like every other kid, and we feel as a family very fortunate to be a part of this program.”

To learn more about Our Big Kitchen, visit www.obk.org.au. 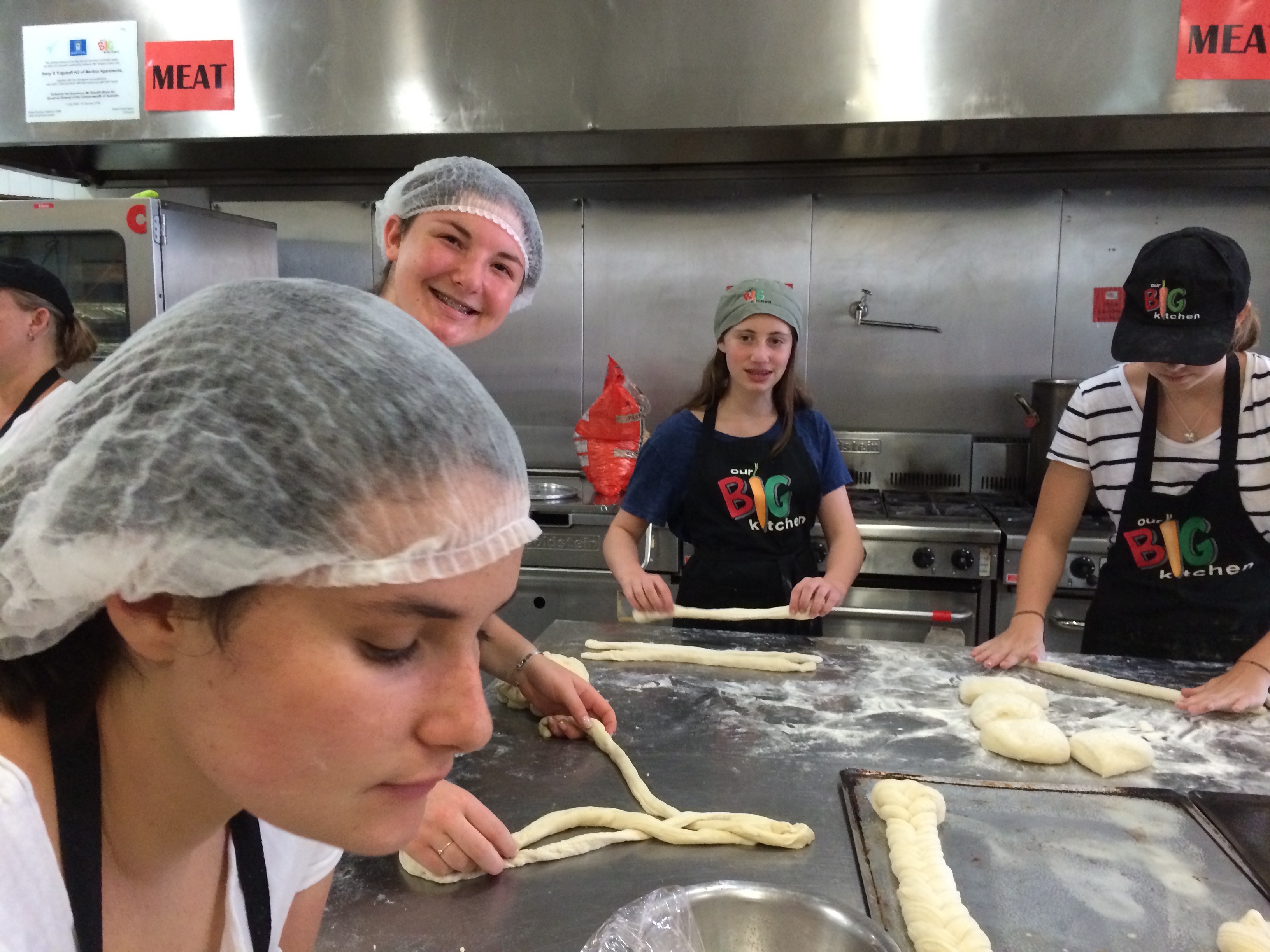