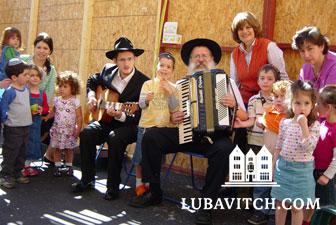 Chabad Jewish Youth Library expanded the plywood walls of its sukkah hut, which already seated 65 for dinner, to include a living room, a window and a fireplace.

“Adding on to the sukkah so people can come in and relax without being cold has been a dream of ours for years,” said Devorah Caytak who directs the library with her husband Dr. Yosef Caytak.

Established in 1983, the 10,000-volume library has an average 400 books on loan each month, a preschool, services for children with special needs, and a summer camp.

“It is the kind of place that really encourages families to get involved,” said Sarah Silverstein. When Silverstein drops off her son David, 4, at the Preschool for the Arts at the Library, she finds herself making excuses to linger, to snack on results from the kids’ latest math/baking lesson, to savor the yeasty challah scented air at the end of each week. “You always feel very welcome. There’s a very warm feel to the whole place.”

Ottawa’s Jewish community can use all the extra warmth it can get. In 2006, a study of Canada’s recent census sliced and diced the data until the state of Ottawa’s 14,000 Jews emerged. The results were alarming. Although the 48% general intermarriage rate is no longer shocking, because it’s lower than the average U.S. rate, the rate of intermarriage among Ottawa’s couples where both partners were under age 30 was a jaw-dropping 82%.

A flurry of three year olds squishing challah dough every Friday during Shabbat for Tots is part of CJYL’s twists on the ordinary. The two-hour program brings toddlers and caregivers together for a Jewish story, song, and challah baking. Downstairs in the preschool, children 2 to 5 have experienced professional music lessons, art programs run by credentialed artists, and Tai Kwon Do lessons. After Sukkot, Katherine Shapiro Moss, a yoga teacher, will be guiding the little ones through their first downward dog pose.

“Devorah’s willingness to be innovative and inclusive brings in people who’d shy away from Jewish activities,” said Moss, whose son Alexander graduated the preschool a few years back. “I think it’s the homey atmosphere that makes a big difference. I would much rather my child be there rather than a concrete jungle with a patch of sand and an institutional sensibility.”

In the sukkah, underneath the cedar hedge boughs that give off a walk in the woods scent, Dr. Caytak, an emergency room physician, will spice up the community spaghetti dinner with a little music. Dr. Caytak studied the accordion for years at the urging of his European parents who survived World War Two. They figured if their son was ever drafted, mastering an instrument would land him a spot – safe and sound – in the military band. Dr. Caytak will be jamming with his son-in-law of three months Mendy Loewenthal, a guitar player.

“Music is a beautiful way of reaching out to people,” said Caytak. “We try to cover everything to promote a love of Jewish life.”