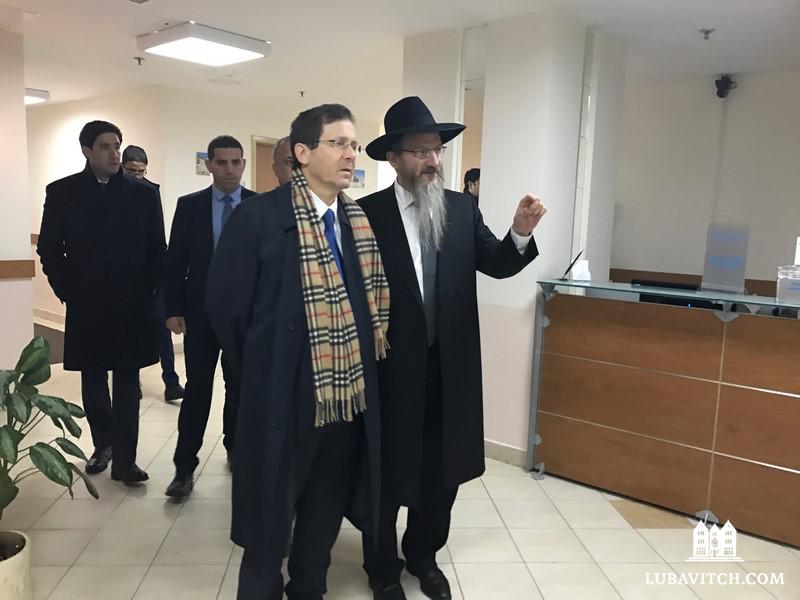 Israeli Opposition Leader and head of the Zionist Union Mr. Isaac (Bougie) Herzog was invited by the Ministry of Foreign Affairs of the Russian Parliament to visit Moscow this week. During his visit, he was escorted by Chief Rabbi of Russia Rabbi Berel Lazar on a tour of the Jewish Museum, the Jewish Chesed Center, and other Jewish institutions. As part of the tour, Herzog was shown the famous Schneerson Library, which was transferred from Vladimir Putin to the museum about two years ago.

Mr. Herzog showed great interest in the history that stands behind these books, asking many questions as he perused the collection.

“I am excited to see that in a place where the practice of Judaism was forbidden for many decades, there is now such a strong and fruitful revival of Yiddishkeit,” He said. “But there is no doubt that the highlight of my visit was the privilege of being able to look through the holy books of the Chabad dynasty, which are now once again a part of the Jewish community in Moscow, a community that is blossoming and flourishing under the leadership of Rabbi Berl Lazar, who personally merited the blessings of the Lubavitcher Rebbe.”

Asked about his thoughts on Mr. Putin, Herzog spoke of his role in international affairs. “Today he has the special opportunity of being able to improve the situation in the Middle East.”

Related Articles
View All
From Heartbreak to Hope
More than 700,000 children live in state-run institutions in Russia and Ukraine. Many go to bed hungry, never see the inside of a classroom and…
Bibi Netanyahu Meets with Sydney Jewish Community and Australian PM
Israeli Prime Minister Bibi Netanyahu and his wife Sara visited Sydney’s Central Synagogue Wednesday as part of an official diplomatic trip to Australia.
Get Inspiration to your inbox!
Newsletter
Join our weekly newsletter for inspiration and updates
Donate
Find Your Local Chabad Center
Chabad
About Chabad-Lubavitch
About Chabad Lubavitch
The Rebbe
Headquarters
Magazine
Magazine
News
News & Updates
In The Media
Impact
Social and Humanitarian
Social and Humanitarian
Education
Education
Community
Community