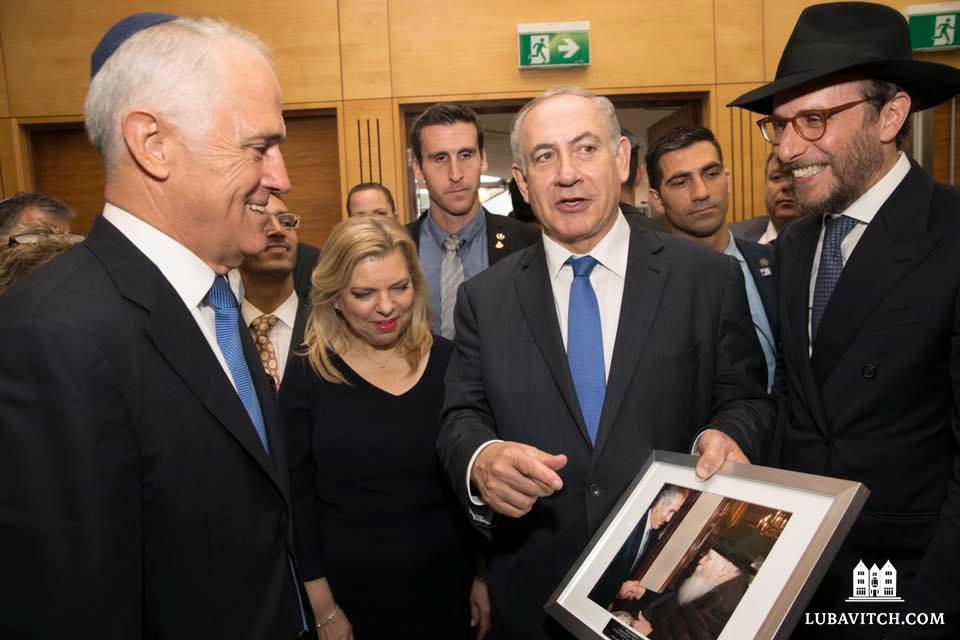 Israeli Prime Minister Bibi Netanyahu and his wife Sara visited Sydney’s Central Synagogue Wednesday as part of an official diplomatic trip to Australia—the first ever from a sitting Israeli prime minister. At the synagogue, which is under the direction of Chabad Rabbi Levi Wolff, Netanyahu addressed a crowd of over 2000, including Australian Prime Minister Malcolm Turnbull, who also spoke at the event, and former prime ministers Tony Abbott and John Howard.

Prime Minister Turnbull spoke first, denouncing a recently passed UN resolution ruling Israel’s settlement activity as illegal. “I came here with a message of solidarity on behalf of the Australian government in the wake of that UN resolution that was so regrettable,” Turnbull said, in a statement reminiscent of the one he shared at his previous visit to the synagogue in January. “We have a lot of work to do together.”

“I salute you, Malcolm Turnbull, and the government of Australia, who stood up time and time again against this demonization,” Netanyahu said. “The resurgent anti semitism we see in many parts of the world is something that we need to fight together.”

Prior to the speech, Rabbi Wolff presented Netanyahu with a framed photo of him visiting the Lubavitcher Rebbe in November of 1990. “This was a great moment,” Netanyahu shared, recalling how the Rebbe’s advice taught him that “I have to be a candle of truth.”

You can watch a video of the speech by clicking on the “video” tab above. A clip of Rabbi Wolff presenting the photo is under the  “Video News” section of our website, located on the homepage.